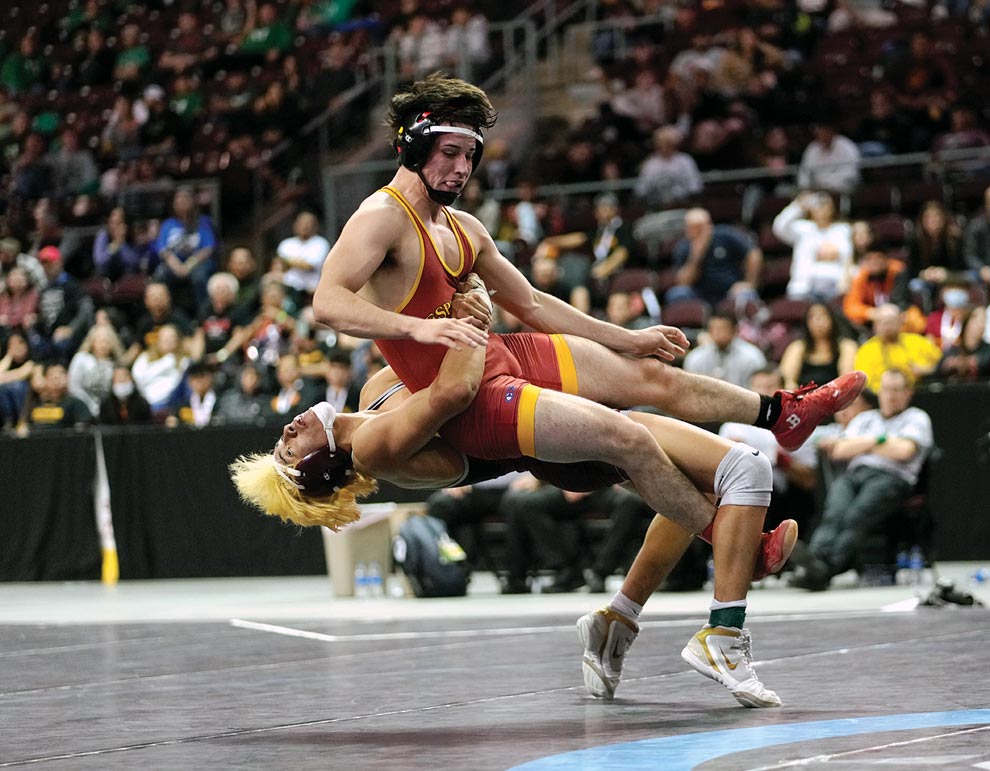 Navajo Times | Donovan Quintero
Shiprock’s Hayden Goodluck lunges backwards as he flips Espanola Valley’s Kyle Coffeen to the mat on Feb. 18 in Rio Rancho, N.M in the New Mexico Class 4A 152-pound state title match. Goodluck capture gold, as he is recognized as one of the Times’ Wrestler of the Year.

Hayden Goodluck had quite the comeback story.

After placing fourth at state two years ago, the Shiprock wrestler got hurt last season.

He returned for his junior season and, despite being seeded fifth, Goodluck surprised the state field in the New Mexico Class 4A 152-pound bracket and claimed gold.

“He really wanted it,” Shiprock coach Erwin Morris said of his pupil. “After missing out last year he worked real hard and he earned it.”

Goodluck capped his season at 24-4 overall and with his first state title he is being recognized as one of the Times’ Wrestlers of the Year in the middleweight division.

He shares that distinction with Snowflake senior Terrell Kinlicheenie, who captured gold at 132 during the Arizona Division III state wrestling tournament.

File photo
Farmington’s Kioni Benally raises his arms into the air after defeating his opponent in Rio Rancho, N.M. Benally was named co-wrestler of the year in the upper weight division.

Kinlicheenie finished the year at 53-1 overall.

In the lower weight division, Monument Valley’s Matthew Curley and Miyamura’s Rhys Sellers were also tabbed wrestlers of the year.

In the finals, the MV junior lost a 10-5 decision to top-seeded Khel Lipumano of Yuma Catholic as he finished the year with a 31-6 overall record.

Sellers, meanwhile, capped his senior year with the 4A state title in the 120-pound weight class.

Sellers went 41-0 for the year, scoring an 8-4 decision over Aztec’s Talan Olguin in the title match.

This was Sellers first state crown after finishing second last season and fourth two years ago.

“It’s just a dream come true,” Sellers said. “I’ve failed the last couple years and it just sucks because my dad (Nate Sellers) put so much time and money into me just to get good.

“It finally paid off this year,” he said. “It just makes everything feel so much better because of the amount of money and amount of time he puts into me is insane. He’s the best father that you could ask for.”

Denny took silver at the Utah 1A state wrestling tournament, losing the 215-pound championship match to Tintic’s Jaden Kriegh in a fall.

The Whitehorse junior finished the season with a 16-5 overall record.

To reach the finals, Thomas pinned three consecutive opponents before losing a 6-4 decision to top-seed Fisher Porter of Mogollon.

At 285, Benally scored a fall over Ryan Vega of Los Lunas to captured the large school state title in that weight division.

Benally, who finished the year at 31-1 overall, recently signed to compete for New Mexico Highlands University as a two-sport athlete in football and wrestling.

“It’s definitely a big deal because I’ve put in the work for it,” Benally said of winning his first state crown. “I deserve it.”

With a fifth place finish at the state wrestling meet, Winslow’s Jeff Hartman was tabbed the coach of the year.

The Bulldogs qualified 10 wrestlers with four of them placing as Winslow tallied 110 points.

Under the tutelage of Mason, the Scorps captured back-to-back state titles in the large school division, earning 163 points besting district rival La Cueva (154) and Los Lunas (152) for the 5A crown.

Farmington had two individuals who won state crowns (the other being Ivan Smith Jr.) as well as six wrestlers that medaled.

“Every man had to put their time and effort in, even the little guys that went 1-2,” Mason said. “Every one of those points counts, and this was a great team effort, and we finished with a great individual effort.”

Aztec, meanwhile, had another dominating finish in the 4A state meet with three individual winners and 10 state placers.

Aztec finished with a team score of 238 points, earning the school’s 21st in school history with 13 of those under Stinson.