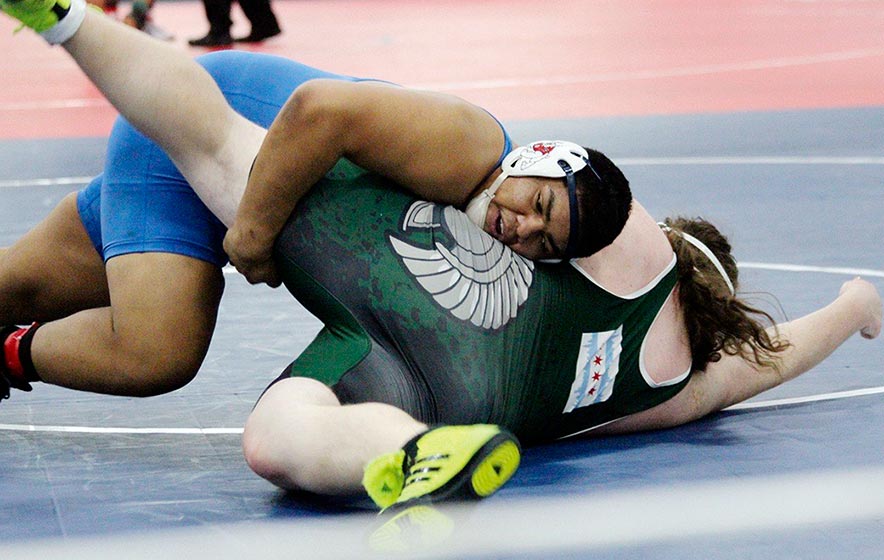 Navajo Times | Submitted Mae Begay
Raymond Begay is a four-time regional and sectional champion and state qualifier for Kennedy High in Chicago. Begay was named the city champion at 285 pounds this past season.

Today, Raymond Begay will be signing his letter of intent to wrestle for Morton Community College in Cicero, Illinois.

Begay has made a name for himself wrestling at Kennedy High in Chicago.

He is a four-time state qualifier and a four-time regional and sectional champion. Begay is possibly the youngest contender to be named Chicago City Champion when he was a sophomore.

“I set my mind to it, that I want to do wrestling and I did,” Begay said. “I won all my matches when I wanted to; I go strong, I start off strong and I end strong.”

He started competing in his freshman year at Kennedy High and found that he liked it. He also played baseball and football, but wrestling is what he really enjoys, saying it taught him a lot about emotions, overcoming challenges, and being independent.

“I’m my own people, my own team,” he said. “I get to choose how I want to wrestle. I don’t have to go as a team. I go out there by myself and I win by myself with my coaches on my side.”

Begay had received six wrestling offers from across the U.S and two for football. He also had the opportunity to play in the Indigenous Bowl where young native football players showcased their skills. Last year, it was held in the U.S Bank Stadium, home of the Minnesota Vikings.

At the time, Mosley became friends with Jamie Begay, Raymond’s oldest brother. After years of friendship, Mosley went to college, became a coach and started teaching at Kennedy High in 2016. Two years later, Raymond joined his wrestling team as a freshman.

“I’m really excited for Raymond and I’m very, very proud of him,” Mosley said. “For someone who didn’t wrestle before high school, he’s accomplished a lot in his four years of wrestling and so much so he accomplished more that I did when I was in high school… I’m there to make them just as good, as I was or better and if I didn’t get them to either or, then I failed them. But I didn’t fail Raymond because honestly, he accomplished everything. Everything he did was all on him and he believed in himself.”

Begay was apart of a generation that started a new chapter for wrestling at Kennedy High. Jayson Joy was one of the school’s first wrestling champions and during his senior year he became Begay’s training partner as a freshman. Joy saw potential in Begay and encouraged him to continue the wrestling tradition.

Begay is the first to finish in the top 10 on the varsity level in the state rankings and during his final year, they finished sixth as a team at the city tournament, the highest the Kennedy team has ever been.

Mosley is certain what caught college coach’s attention were Begay’s strong work ethic and no nonsense attitude. Often he saw Begay push himself and he would also help and encourage his fellow teammates as well.

He is proud of what Begay has accomplished, saying he’ll miss him after having him for four years, but is happy to know he’ll be going on to college.

“He’s very coachable and full of respect,” Mosley said. “I never had an issue with him, not with grades, discipline issues, come in late to practice, none of that he was always on time.

“He’s one of the first ones there and last one to leave,” Mosley said. “To have a kid like that who buys into the program, who wants to come in and work every day, even when I put them through a hard practice and make some of them puke or they leave extra sore, he’ll come back in the next day like nothing happened yesterday. It was awesome.”

The Begay family is very proud of him, says his father Same Begay. From his academic studies to the scholarship that will give him a free ride, they say that alone brought them great cheer.

“We’re very proud of him, he achieves his goals and he has a good head on his shoulder,” Sam Begay said. “He represents himself, our family and tribe in a good way, to have them all achieve and not to give up on their dreams and hope. We’re always the underdog, throughout history and everything, but we always come out on top.”

Begay’s grandfather was a Navajo Code Talker and the family has always told him to fight hard in what he believes in.

“I told my son when he went into wrestling, ‘It’s just going be you. If you mess up and do something wrong, you will lose, but it’s all up to you,’” he said. “And I think it disciplined him to make the right decisions where he always came out winning.”

Sam Begay is proud of how his son has grown, being a smart and respectable man as well as being disciplined and hard working. He knows its tough living in the city where there can be bad influences, so to see his son to thrive in sports was a blessing.

“We’re very thankful for you guys to get the word out there for us and everything and to also let you know that us Navajos that live in the big city, we’re doing good and I know that people back home will be very proud of them,” he said.

Raymond Begay said it was sometimes tough keeping up with school and wrestling, but he thanks his tutor, Maribel, for helping him to keep up with his grades.

He also thanks his family and coaches for helping along the way, saying they provided him with the strength when he was competing for the championships.

He plans to focus on welding in college, but harbors dreams of playing in national competitions and maybe even the Olympics. One of his inspirations is Gable Stevenson, a heavyweight champion, Olympic athlete and current WWE athlete.

Begay hopes this achievement will shine more light on natives, especially in places like the city where there is a lot of competition.

“I would like everybody to learn about wrestling and all that, and stay in school,” Begay said. “Don’t drop out or anything like that. Work hard, especially us natives and don’t do any of that bad stuff so you can succeed in life.”