But the Piedra Vista High School graduate still finished as one of the better wrestlers for Colorado School of Mines. 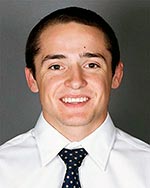 Submitted
Colorado School of Mines wrester Wes Rayburn is looking to improve on his 16-10 record last season in a higher weight class this year.

Splitting time with two teammates in competing at 141 pounds, the redshirt freshman wrestled to a 16-10 record. The four teammates who posted better records — and better winning percentages — were redshirt sophomores or older. “It was a pretty good year,” Rayburn said.

He and two others shared the team lead with nine victories by decision. His top finish was a second place at the University of Nebraska at Kearney Amateur Open in November, when he compiled a 4-1 record. He won by fall, major decision and two decisions before losing 5-2 in the championship bout. “In college there’s no easy match,” he said.

He placed fourth in the season opener, the University of Wyoming Cowboy Open. He finished with a 5-2 record, dropping a 7-5 decision in the third-place bout. His wins were by fall, technical fall, 8-4 decision and two forfeits.

“He’s kind of a slick guy,” Mines head wrestling coach Austin Devoe said. “Flexibility and quickness make him a strong guy on the roster. Wrestling strength is where he excels.

“We’re expecting big things from him this year,” he said.

The redshirt sophomore, who finished 0-2 at the NCAA Division II Super Region VI Championships, enters this season with a more aggressive strategy: “Score as much as I can as often as I can,” he said. “Last year I would get ahead and then pump the brakes.”

He said he realized that opponents “are more focused at scoring at the end of the period so I don’t have a chance to score.”

Though he tended to build a lead in matches, according to Devoe, he did not close out bouts the way he should have by wrestling throughout and building his advantage.

With that lesson learned, Rayburn is more prepared to contend in a challenging weight class. He is in a better place physically, too, for he said he has gained 10 pounds and is more muscular.

“Even the older, more experienced guys, I felt I was as strong and as fast as them,” he said. “I’ve had a lot more time to focus on lifting and getting stronger.”