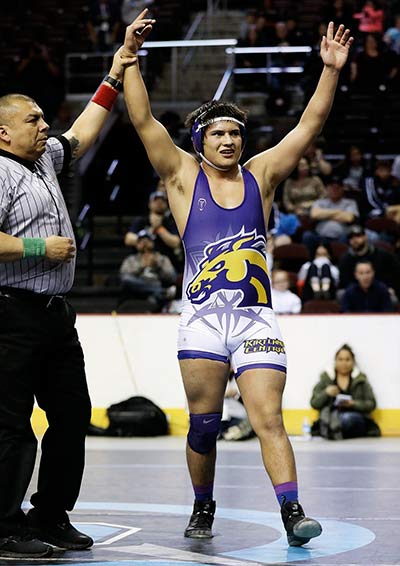 At every practice this season, Jarryd Pollard left puddles of sweat across the mats in the wrestling room.

The shine left on the mats was evidence of the hard work the 220-pound Kirtland Central High School senior wrestler put in. It was affirmation left behind by a soon-to-be state champion.

“He worked with one of my other wrestlers a lot. You knew where they had wrestled because there was sweat all over the mat where they were at, and it was non-stop,” Kirtland Central head coach John Sandoval said. “Two hours, just non-stop. Literally, he and Ian Thomas, nobody outworked those two in the wrestling room. His work ethic has made him into what he is today, that’s why he’s a state champion.”

Pollard, who is Diné and Ojibwe, won his first-ever state championship title in the 220 weight class of the 2019 New Mexico National Guard State Wrestling Championships held at the Santa Ana Star Center over the weekend.

He defeated Del Norte’s Radford Coleton in the finals by a 5-3 sudden victory in overtime, and went 4-0 throughout the tournament. He finished with an overall record of 48-4.

Pollard said it was what he wanted and what he planned for after he finished sixth in the state championships last season.

“It felt amazing. I always dreamt of it, even my sophomore year, even when I did bad, I always wanted to be a state champion,” he said.

Pollard started wrestling in the seventh grade. He started high school at Navajo Preparatory School but moved back to Kirtland his sophomore year and started his high school wrestling career.
Pollard said he remembered it like it was yesterday.

“I came out really rusty,” he said. “I was just trying to get used to wrestling every week. I didn’t do really good.”