There will be a new look when the New Mexico high school wrestling season commences later this year. 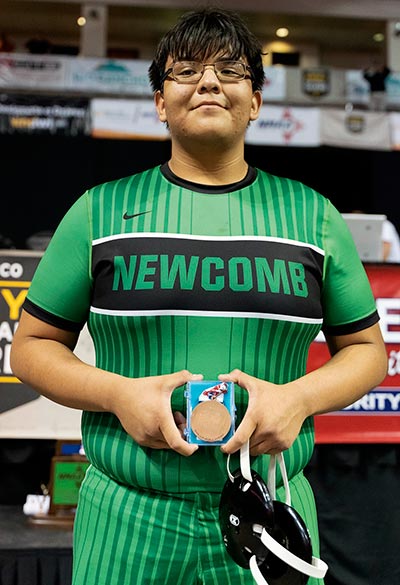 File photo
Newcomb senior Noah Morris placed third at the New Mexico Class A-3A state wrestling tournament at 285 earlier this year. For the next two-year block, the Skyhawks will move into a nine-team district that includes state powerhouses Aztec and Bloomfield.

The New Mexico Activities Association is set to go from a three-tier classification to two classes for boys wrestling.

There are 65 high school programs that compete in wrestling. This past season, 28 schools competed in the big school’s division in 5A, while the 4A division had 25 and the combined classes of 1A, 2A, and 3A had 11.

For the two-year block of the 2022-24 wrestling seasons, the large school division will have 27 teams, and the combined classes of 1A-4A will have 38 schools.

“With us going to 4A next year, it’s going to be a lot tougher,” Newcomb assistant coach Landon Yazzie said. “It’ll be tough, but in our (wrestling) room at Newcomb, we always had that idea that we can roll around with anybody in the state.”

“We just have to keep that mentality for next season,” he added.

In last season’s format, Newcomb was one of seven teams that made up District 1-A/3A. The district also included Shiprock Northwest and Wingate.

For the next two seasons, those three schools will compete in District 1-A/4A, one of New Mexico’s most competitive districts.

The new district will grow from six teams to nine, with Aztec, Bloomfield, and Miyamura the frontrunners. The other teams include Gallup, Kirtland Central, and Shiprock.

“Our district is going to be big,” Yazzie said. “It’s going to be tough, but we’re being real with the kids. We’ve told them that everything they want to do in terms of improving their wrestling skills, it happens during the summer.

“And if they can keep that mentality and chug along throughout the summer, I think you’ll see Newcomb tearing it up on the mat next season.”

This past season, Newcomb got eight wrestlers to state, two of them vying for a medal. Senior Noah Morris placed third at 285, and junior Nolan Dempsey missed the podium by taking fourth at 220.

“What a way to end his senior year,” Newcomb head coach Tom Yazzie said of Morris earlier this year.

In addition, the Yazzie-coached team had three runner-up finishes at the district meet. 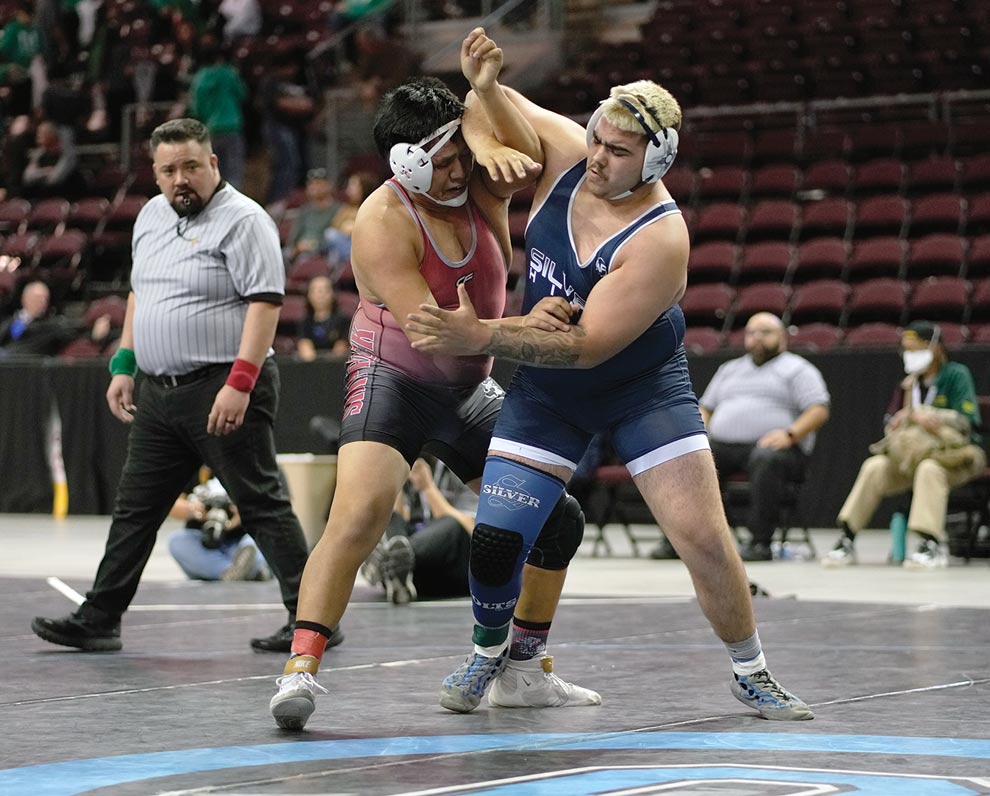 Navajo Times | File
Shiprock’s Jaylon Begay wrestles with Silver’s Marley Gutierrez in this file photo during the New Mexico Class 4A state wrestling tournament earlier this year. For the next two-year block, the boys wrestling will feature two classifications.

Next season, Newcomb is set to return eight lettermen, including four wrestlers that made state.

“We got wildcards for a couple of our kids,” Landon said. “We’re very thankful for that because they got to see what the state tournament is like even though they were a little bit inexperienced.

“Hopefully, that gets them excited for next year,” he added. “To be competitive here at state, you got to have mat time, and you have to have some years behind you, so the state experience will help.”

Landon said the Newcomb squad would be rebuilding with six seniors set to graduate next season.

“With what we have coming back, we’re probably going to have to recruit some kids to join our program,” he said. “But we have a freshman that is looking pretty good, and we have a junior that has one more year, and they’ll be looking to medal at state next year.”

Landon said they usually start the season with 25 wrestlers, and those numbers tend to drop drastically once they realize how much effort they have to put into the sport.

“They understand that we’re wrestling with teams like Rio Rancho, Cleveland, and big schools like Aztec,” he added. “Those are really tough schools, but we’ve always done really great against them, so we’re gonna be OK.”