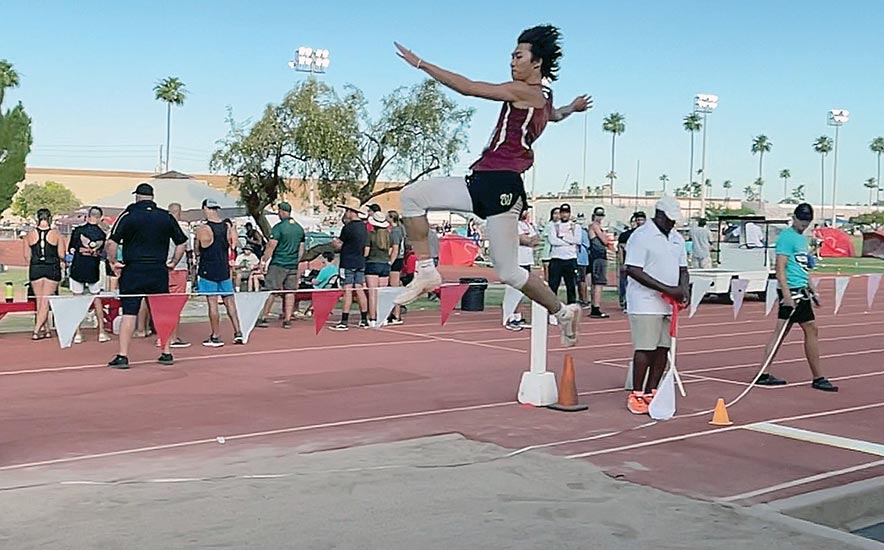 Almost two weeks ago, Jett Jue went to the state track meet with his small team of qualifiers from Winslow High and won gold in the boys’ long jump event.

“It’s really exciting,” Jue said. “I’ve set that goal for myself. Last year I started placed fourth at state, and since then, I’ve just been working really hard, and it’s really fulfilling to actually achieve it.”

Jue is one of a few students from a local school named a state champion, the other being Trinity Bethea of Piñon High.

Jue competed in only track for nearly three, but the COVID-19 pandemic prevented him from competing that year. In his freshman year, he played baseball and then three years of basketball.

“I really liked the idea of track being an individual sport,” Jue said. “Usually with most sports, it’s more of like a team-orientated activity, which is also fun, but I think with track, it’s more based around yourself, so you’re always competing towards yourself.”

The COVID-19 pandemic hit Arizona during his sophomore year, and the school was briefly closed. But Jue was determined and continued training until the school reopened, and he competed in his junior year.

Last year, he came in fourth in the long jump, but that placement encouraged him as he saw how close he was to first.

Working extensively with the track coach, Stacey Berg, Jue slowly increased the distance in his jumps. Jue proudly says that he placed first in his meets this year.

Fourteen members of the Winslow team made it to state, with Jue being the only one to win first place.

Jue said the competition was challenging, and the weather was hot, but he did train in Phoenix and felt he performed better in the heat.

His results were 23-06.75 feet, almost half a foot ahead of second place with 22-09.75 feet. He was also ranked as the top performer in the long jump across all divisions.

“It was a lot tougher competition this year,” Jue said. “I think throughout the season, he (last year’s champion) was ranked first in our division, but before state, I actually jumped 23 feet which placed me at first instead of him.

“It’s been pretty fun competing with such good competition compared to last year,” he said.

Winning the state title was an excellent way to cap his senior year, saying he is satisfied with his performance. He enrolled at Arizona State University for the fall semester and plans to study computer science.

In addition to sports, Jue was a part of the National Honor Society, numerous clubs, and student council. He graduated in the top 10% of his class and was elected homecoming king.

Last year, he participated in the National Junior Olympics, where he came in 11th place.

“My schedule was full most of the time,” Jue laughed. “I definitely needed time management and not really waste as much time, but I think it was definitely worth it.”

Jue said he had a great time competing in sports at Winslow High.

He said sports taught him a lot, especially in shaping his core values and beliefs. It taught him one could do whatever they want with hard work, and when one puts their mind to something, it can be accomplished.

“I just like to thank all the people in Winslow and the community that has helped support me,” Jue said. “I’d like to thank my parents, Jack and Leona Jue, for always pushing me forward to reach my goals and do my best.

“And I like to thank my coaches, Stacey Berg and Andrew Legate, for just being such a good support system for me,” he added.