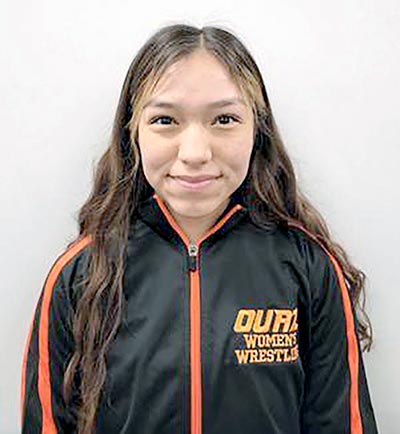 The freshman out of Monument Valley High School begins the new year rated fifth in the 109-pound class in the National Collegiate Wrestling Association’s Jan. 1 rankings. Those ranked ahead were upperclassmen.

Nine teammates ranked higher, including four rated second and one first, as Ottawa Arizona remained No. 1.

Although she has competed at 109 pounds, head coach Ed Cruz said 101 is her main weight class. The lineup fluctuates, with wrestlers moving up weight classes, depending on the opponent’s lineup, he said.

In her November debut at the ERAU Mile High Open, she finished in fourth place at 109 in the women’s freestyle division. She won by a pin in the consolations semifinal match and lost twice by technical fall, once to the eventual class winner.

At a competition a week later, she won by pin at 109 pounds.

She is still getting used to freestyle wrestling after competing in folkstyle. “It was kind of tough,” she said. “I think I could do better with more time.”

“The competition is getting harder and harder,” she said. “They’re more intimidating.”

Cruz said her wrestling has improved because she regularly trains with teammates who helped the squad finish runner-up at last year’s National Championships.

“One of her drill partners is a national champion (junior Hermelinda Mendoza),” he said. “She’s way more confident now.”

Maintaining the proper mindset – and believing in herself – remains a work in progress, Alcott said. “Keeping up with my thoughts about keep going. Being on the mat is all about trying to keep going,” she said. “Thinking I need to score even after I fail.”

The coach said she has been making minor modifications to her technique because the details make such a difference in outcomes. “You sweat the small stuff,” he said.

Alcott lost by technical fall twice at 101 pounds in the December Las Vegas Duals, with each opponent more experienced.