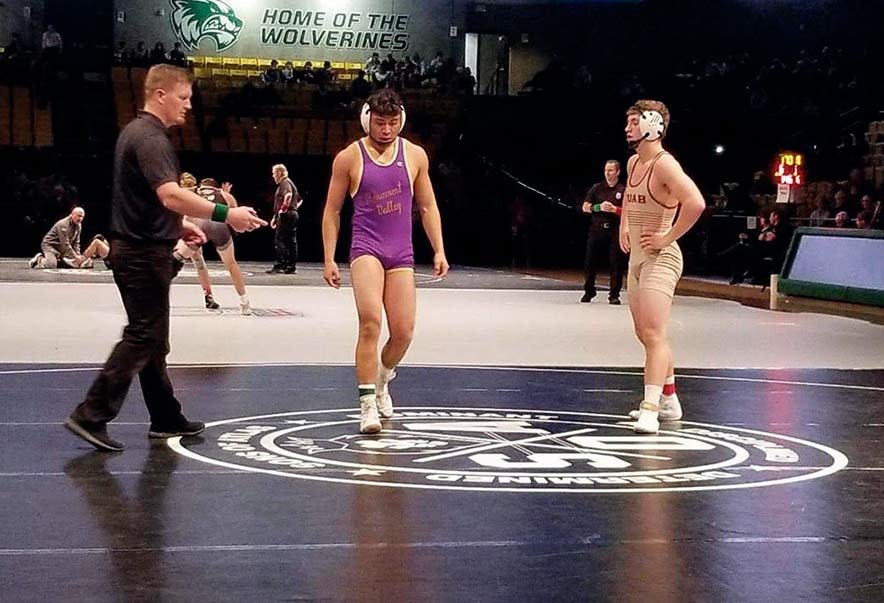 Monument Valley wrestling standout Tanner Tsinigine gets ready to compete at the Utah All-Star Dual in mid-January. At that marquee showcase, Tsinigine picked up his only loss of the season as he amassed a 33-1 overall record as he captured his second state title in the 160-pound division.

Since the start of the wrestling season last fall, Tanner Tsinigine was thinking about wi nning a second state title.

The Monument Valley, Utah senior did just that as he claimed the 160-pound division at the Utah 1A/2A state wrestling tournament on Feb. 7-8 in Richfield, Utah.

Tsinigine pinned all of his opponents during the two-day state tournament and finished with a 33-1 overall record.

“It was kind of like a bittersweet feeling since it was my last year,” said Tsinigine, who followed his dad’s footsteps in the sport. “I just didn’t want to be one of those kids that failed to repeat as a state champion.”

In his past experience, the MV wrestler said he’s seen other defending champions falter in the semis or finals so he stuck to a strict regimen to dodge that fate.

“I avoided high sugar drinks and foods high in fat,” he said. “And after practice I would hit the weight room and then I would run sprints inside the gym to get in more conditioning.”

Monument Valley coach Chase Ellet said it didn’t surprised him that Tsinigine claimed another state title as he moved up one weight class this past season.

“He had a new sense of confidence about him,” the fifth-year MV coach said. “He knew that he was able to achieve what he set his mind to.

“Before he would work hard but it felt like something was holding him back,” he added. “But after he took state we knew he could do whatever he wanted to do.”

Last season, Tsinigine took home the 152-pound state title and finished with a 40-6 overall record. Based on his finish last season and his early success for the 2019-20 season, he was invited to compete in the Utah All-Star Dual in mid-January, which featured the state’s best regardless of class.

At that marquee showcase, Tsinigine picked up his only loss of the season as he was pinned by Will Harmon, a 3A wrestler at Nephi Juab High, at the end of the second quarter.

“I’m actually the first person to be invited from my school,” Tsinigine said, while noting that he was one of two wrestlers from the 1A level to be invited.

“It was awesome to be there,” he said. “I had to wrestle even harder to compete with some of those bigger schools.”

Ellet said it was “a privilege to coach Tsinigine” at that invitational-only dual meet.

“I’m certainly impressed because I’ve never coached someone that’s made it to the all-stars,” he said.

In addition to the all-star dual, Tsinigine grappled with other wrestlers at the 6A, 5A, 4A and 3A level in the tournaments the school entered as he placed first at Pineview Invitational in St. George, the Manti Tournament, the Grand County Invite in Moab and the Peabody Classic, which is hosted by Arizona’s Monument Valley High School.

Tsingine said he used those tournament experiences to better himself as that laid the groundwork for his second consecutive state title.

“I was at another level with the 1A kids but when we went to those tournaments I felt like I had to step up my game,” he said, while noting that he was better equipped to handle the mental aspects of wrestling.

“This year I was unstoppable because of my mentality,” he said.

In the state title match two months ago, Tsinigine matched up with Milford junior Casek Hardy for the second time this season as both grappled for the Utah 1A Region crown the week before.

“He was a lot tougher the second time around,” Tsingine said. “I couldn’t get into my leg attacks so there were no takedowns in the first period.”

With Hardy winning the toss, the Milford wrestler chose bottom and for the duration of the period Tsinigine rode his opponent out until he found an opening.

Despite having state experience, Tsinigine admitted he had jitters going into his final match of the season.

“I could feel it,” he said of the pressure of trying to become a two-time state champ. “And with the way the setup was everybody was watching so that got my nerves up.”

Nonetheless, he felt that there was more pressure on his opponent since this was Hardy’s first time making a state finals.

“I think he was kind of scared,” Tsinigine said of his opponent. “I felt like I had an advantage because it’s a whole different feeling when you’ve made the (state) finals.”

Looking back, Tsinigine said he’s happy with what he’s accomplished and he credits his dad, Marques, for introducing him to wrestling.

“I used to watch videos of my dad when he wrestled,” said Tanner, who added that his father was also a state finalist back in his heyday.

With plans to wrestle at the collegiate level, Tsinigine said he has yet to visit any colleges due to the novel coronavirus epidemic.

“I was supposed to be taking recruiting trips but they were all cancelled,” he said.

Ellet expects his pupil to do well at whatever college he chooses, based on his work ethic.

“He’s a type of kid that wrestles all year so he just doesn’t do one style – he does all the styles he can get,” he said. “College wrestling is much different than high school but I think he’ll fit in well because he’s able to adapt to his surroundings.”

The MV coach said he hopes other kids in the community will be inspired by what Tsinigine has done despite not having the same resources that other Utah schools have.

“He’s left an expectation that anybody can achieve the same thing that he has,” he said. “I think he gives the kids hope and it’s going to help with the kids coming back next year because they’ll know that if they keep working hard they can get at that level.”