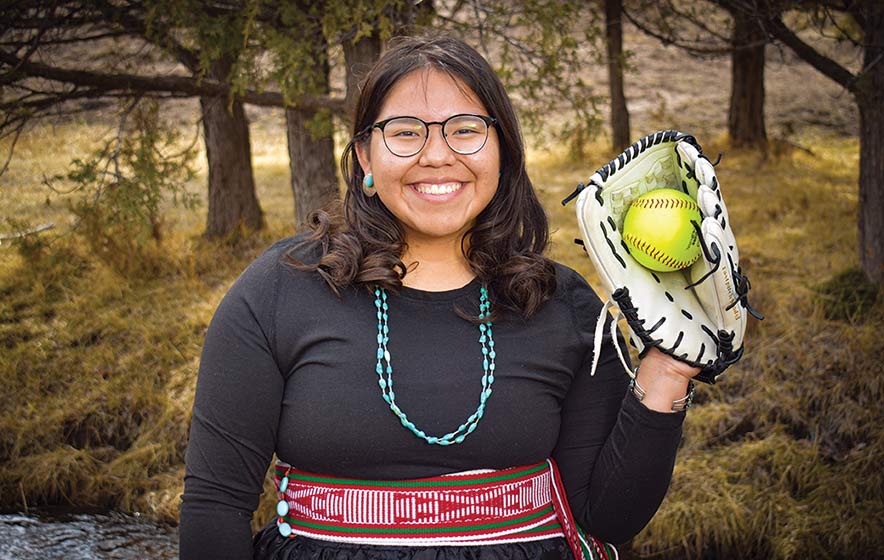 Submitted
In what she hoped might be a photo for her graduation announcements, Cina Curley of Chinle holds her mitt and softball. The Chinle High School senior has been accepted by five top-tier schools.

Cina Curley was always told she was smart and good in school. When she was eight or so, she started picturing herself as a college student attending an Ivy League university.

But when she revealed those aspirations to her friends, they were less than supportive. “They were like, ‘You don’t want to go to a place like that!’” she recalled. “So I settled on the University of Arizona.”

That was her dream until her junior year at Chinle High School when she walked into Parsifal Smith-Hill’s advanced placement English class. Over the years he’s been teaching at Chinle, Smith-Hill has made it his mission to get as many of his students as possible into top-tier schools.

When Curley confided her plan to go to UofA, Smith-Hill seemed to know that wasn’t her real dream. “He was like, ‘You know you can do better than that, right?’” Curley recalled.

Smith-Hill encouraged Curley, who is Nakai Diné’e, born for Ma’ii Deeshghiizhnii, to take advantage of a spring-break tour of Cornell. As she walked across the green lawns among the castle-like red brick buildings, her childhood dream came flooding back.

Hoping to get into one Ivy League institution, Curley applied to all of them, plus Stanford for good measure. She backed up those applications with some safety schools: all three state universities plus Grand Canyon University, Seton Hall and Pomona College.

“I was expecting to get into one,” she said. “I had gotten what Pars calls a ‘likely’ letter from Cornell, so at least I was pretty sure I was going to college.”

These days, you don’t wait for acceptance letters. Each school has an “applicant status portal” you can check. The day the schools were supposed to reveal their decisions, Curley was so nervous she had to call a friend to check the portals for her.

It wasn’t one yes among the Ivies – it was four: Harvard, Brown, Columbia and Cornell. (She’s waitlisted at Dartmouth.) The next day, she found out she got into Stanford. On the one hand, Curley was elated; on the other, she has some serious choosing to do.

“At this point, I’m leaning toward Harvard,” she mused. “They have a really good psychology program, which is what I’m interested in.”

She’s keeping an open mind, though. She’ll miss the experience of being courted; in these days of COVID-19, all you get is a virtual campus tour and a Zoom chat. “I’m going to have to do a lot of my own research, and get my financial aid situation figured out,” she said.

While she’s grateful to have such an astounding array of choices, she’s also nervous. Like most every other high school senior across the country, the rest of her school year has been canceled in favor of online classes and distance learning packets.

The Arizona Board of Education is supposed to come up with graduation requirements, but so far it hasn’t. “All the schools want final-year reports and I’m not sure how my school is going to handle that,” she said. “I don’t know how transcripts will be dealt with. I don’t know how I’m getting my diploma.”

So far the colleges have been understanding, she said.

What’s the secret to getting into five of the country’s best schools? It’s no secret.

“Honestly, it’s just a lot of hard work,” Curley said. “I’ve been prioritizing academics since I was in first grade.”

That doesn’t mean she hasn’t left time for other things: She’s an outfielder on the Chinle High softball team and a percussionist in the school band, both pursuits she would like to continue into college if possible.

It also helps to have a teacher like Smith-Hill and a supportive family, she said. Her parents, Carlson Curley and Tammie Henderson, have always stressed education, and since she got into high school her friends no longer dismiss her big dreams.

“I have to give a lot of thanks to my family and friends,” Curley said. “They knew I could do it before I did.”

Curley is actually the second CHS student to get into five top-tier schools in as many years. Keanu Gorman, now a freshman at Harvard, logged a similar average last year.

The common denominator was Smith-Hill. The English teacher, who is retiring after this school year, said his strategy is to show the kids examples from his own life of hard work paying off — specifically his success as a rock climber.

“Once I’ve done that, it’s about getting them to believe in themselves as much I believe in them,” he said. “That means speaking with them every day, asking them what their goals are, encouraging them to research the schools they’re interested in, and reminding them that this is the one and only life they get to live and that, in the end, the decisions they make, especially regarding college, has to be their own.”

He also invites former students to come speak his class about their accomplishments. “When current students see that young women and men who are thriving in college were just like they are now, taking the same classes in the same school from the same area, it gives them confidence that they, too, can succeed anywhere,” he said.