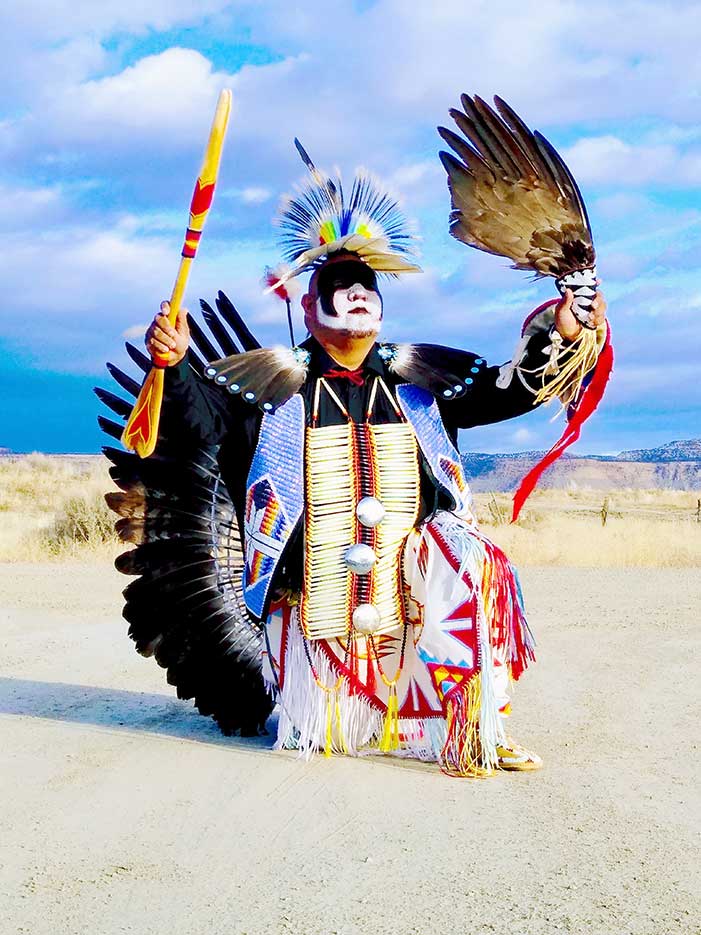 Courtesy photo | Terece Newman
“Prayer for all Nations,” an image of the artist posted in the Social Distance Powwow, by Jerome Lopez of the Ute Mountain Tribe.

There’s a new powwow in cyberspace and it’s taking the world by storm. The sensational Social Distance Powwow group on Facebook launched just two weeks ago and its growth has been exponential, in a good way!

The site, with 110,000 members as of Monday, has been gaining up to 10,000 members per day, said Stephanie Hebert, Mi’kmaq, behind-the-scenes platform coordinator and beadworker.

“We broke the internet!” said Hebert. “It’s exciting, it’s different, it’s vibrant! There has been an explosion of activity in the past two weeks.” Native American dancers, singers, drummers, storytellers, musicians, and artists are posting video performances and photos from all over the globe, says Hebert.

What do they all have in common? Prayers for healing the world. Northern traditional dancer Jerome Lopez, Ute Mountain Ute, said he was drawn to the Social Distance Powwow because he thought it was a great idea. “To me, it’s a healing,” said Lopez. “I believe many prayers are going to the Creator. It’s very strong and powerful to see everyone doing their part. We’re not there in person, but when you see those things on Facebook it gives people hope and pride. It brings their spirits up just to see everyone coming together as one.”

That’s precisely what the distance powwow group’s founder Dan Simonds, Mashantucket Pequot, a wampum jewelry maker, had in mind. Simonds says the main reason he started the group was to find a way to offer some hope in the face of the coronavirus crisis.

“Me sitting on the couch seeing people consumed by this, I said, ‘This is going to drive people crazy if this is all that’s on the media,’” he said. Simonds said he wanted to bring some “love and light” to the world.

“As you know, the media focuses on the negatives,” said Simonds. “That’s what we need to stop doing. It doesn’t help. We have to stop breaking each other down because that negativity isn’t getting us anywhere.” Simonds believes the continuous flow of talented singers and dancers keeps everyone’s minds off of other news.

He’s thankful the group is redirecting people from negative posts to positive ones. “We’ve broken the rules of media and it’s something that’s rarely done,” he said.

Many agree the distance powwow is the best thing to hit the news feed in this time and provides a welcome antidote to the constant drumbeat of coronavirus updates.

“The feedback has been overwhelmingly positive,” said Hebert. “I struggle to remember a time when over a hundred thousand Native people and others around the world gathered together to lift each other up.”

With all of the posts and prayers, there’s no doubt good vibes are going out to the universe, she said. “The positivity of this group is doing so much for everybody, mentally, spiritually and physically,” said Hebert.

In the big picture, Simonds believes the earth is telling us we have to go back to original ways of being because this society is collapsing, not only because of the virus but because of the way we function.

We have all been programmed to only think about the negative and that has to change, he said. “We have to rewire and reprogram,” he said. “We have to wake up and ask ourselves, ‘How did this society collapse and how can we create something that works?’” Life is on pause right now and we’re all going back to how things should be, he said.

Simonds said because of multiple powwows, arts events and conferences have been shutting down due to the pandemic, many arts and crafts vendors were losing opportunities to sell their merchandise and earn their livelihood. As an arts vendor himself, he said most of his shows have been cancelled, which translates into a major loss financially.

“I wanted to bring a platform that allowed not only dancers, singers, performers, but also artists and vendors,” he said. “I wanted to make sure that money (from sales) goes back to Native families and communities.”

Metis artist Pam Cailloux, Huron/Algonquin, has made a big splash on the distance powwow site with her popular paintings. Cailloux said the response to her work has been so enormous that she might have to hire an assistant. She’s even sold pieces that are not finished yet.

“The amount of messages and the amount of work that’s been asked of me is unbelievable,” said Cailloux. “It’s absolutely been beneficial and has opened doors to other places. It’s bringing the globe together as a nation and broadening the horizons for knowledge.”

The distance powwow’s host and emcee Whitney Rencountre, Crow Creek Sioux, said he had no expectation the site would turn into what it is now. “It just started going viral,” he said. “It caught on like wildfire!”

Rencountre said it’s remarkable that just when everyone thought this year’s powwow season was lost, now the powwow family has moved online. “It’s helping us so we’re happy it’s helping other people in this time of quarantine,” said Rencountre.

He says it feels good when he and his wife can jump on Facebook and connect with everyone who’s usually at powwows. “We don’t have to travel a thousand miles,” chuckled Rencountre. He says the whole thing is also sparking ideas for the future.

“This is going to open up so many doors, not only for powwow people but artists,” said Rencountre, who believes the site has the power to facilitate a better understanding of Native American culture overall.

“The biggest thing for me is powwows are usually for powwow people, but with this online platform, it opens it up to the world,” he said. “There are people who have never seen a powwow before watching the singers and dancers for the first time.”

Many special things are happening, said Rencountre. For example, just this week members of the Maori tribe have committed to doing a live Haka ceremonial dance on the live feed soon. “It’s certainly creating opportunities for all indigenous cultures across the world,” he said. “It’s going to connect us all.”

Rencountre believes the distance powwow experience in the face of the pandemic is also giving people a chance to remember who they truly are and what their purpose is.

“We’re trying to promote Native entrepreneurs, storytellers, cooks, musicians, comedians,” he said. “We’re hoping this group can provide a platform to promote their gifts and talents to a world-wide audience.”

Rencountre said participating in the distance powwow by definition keeps people’s minds off of the fear and uncertainty in the mainstream media. “When we started this page, it put my mind in a different place,” he said. “We’re interacting with people. That’s what our traditional ceremonies and social gatherings do. They help you to enjoy life, and learn how to respect other people, how to be generous and compassionate.”

Recountre said the site is bringing a lot of humor and laughter too. “Like when you see mothers, grandmas and auntees getting their children out in the front yard to dance, and you see the Rez dogs looking at the kids like they’re wondering what’s going on,” said Rencountre.

Bottom line, the distance powwow has turned into a grassroots movement, said Rencountre.

“This is something that’s helping us through this tough time,” he said. In the meantime, Rencountre said he’s looking forward to another great powwow on Saturday. The songs, dances, artwork, language and interactions from home will surely inspire again, he said. “We have a great line-up of champion dancers, singers and other people who will be joining in on the live feed,” he said. “To me it’s just becoming the longest running powwow… It doesn’t stop.”