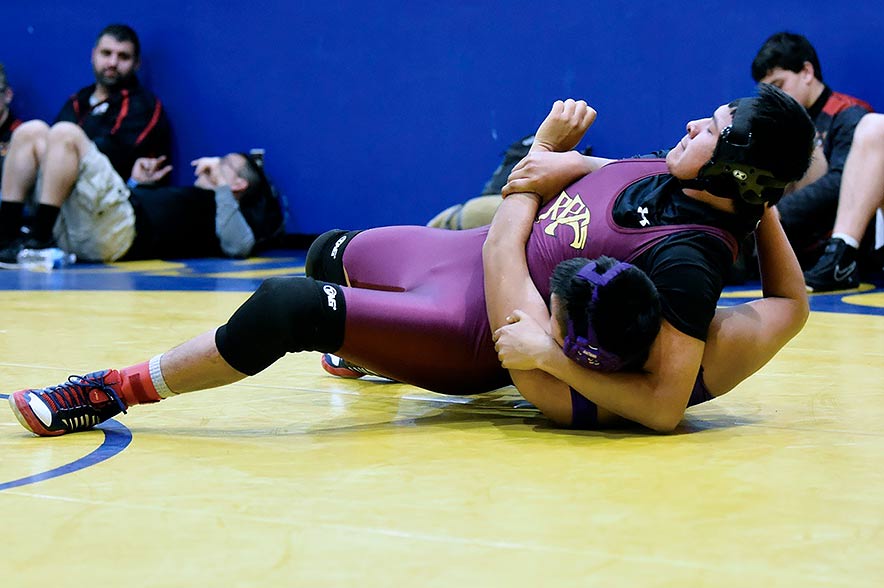 When Fred Boone was first asked to run the Rock Point wrestling program he was hoping to start something at the elementary level.

Instead he was summoned to launch the high school program from scratch. In his first year last season he had six wrestlers on his team.

In his second year, Boone started the season with seven wrestlers but he lost half of his squad due to grades. Besides losing those individuals, Boone said the basketball team picked up two of his wrestlers from last year’s squad.

“We’re competing against the basketball team,” he said of the task of getting individuals to join his team at Rock Point High, which has a student body of 135 from ninth to 12th grade.

With the season more than halfway done, Boone is now coaching three individuals.

As a longtime enthusiast of the sport, Boone said he wrestled at the elementary level while attending Tuba City Boarding School.

“That’s where I got my start,” he said. “It’s one of the powerhouses at the junior high level.”

In addition to the Tuba City Boarding School, Boone said they saw good competition from the middle schools at Page and Kayenta. With strong wrestling programs, he said those schools are thriving and in the long run it benefits their high school programs.

“I would like to start something like that for the kids at Rock Point,” Boone said. “It’s best that they start that early.”

The Rock Point coach said learning the sport at an early age helps develop their stamina and more importantly it allows them to develop their skills. Like golf, he said it takes time to grow your game.

“Wrestling is an individual sport,” he said. “It takes time to learn the fundamentals. You have to have the determination, desire and dedication to do it.”

Rock Point senior Myrin Harrison has acquired some of that desire and dedication as a second-year wrestler.

“I wanted to try something new,” Harrison said when asked why he joined.

Admittedly, the Rock Point wrestler said it was hard to get himself familiarized with the sport but with the help of his coach he’s learning a lot.

“I love the workouts and I love wrestling too,” he said. “It’s fun for me and my coach keeps me motivated.”

By joining the team, Harrison said its also paying dividends in the classroom.

“It helps keep my grades up,” he said. “Wrestling keeps me disciplined.”

And while he’s still learning, Harrison said he’s grasped a lot of the concepts.

“I’ve learned some new techniques,” he said. “I’m doing my workouts and I’ve learned how to manage my weight.”

To further develop his understanding of the basic wrestling moves, Harrison said he studies others and tries to mimic them.

“I try to figure out what their techniques are and I try to do what they are doing,” he said.

Begay said his pupil is a model student of the sport and he’s hoping to inspire others to join his program.

“I want to grow this sport for the kids at Rock Point,” he said. “To build a solid program the kids have to start early so I want to establish a program at the elementary and junior high level.”

As one of the first athletes to join the team, Harrison could be considered a pioneer for the Rock Point wrestling team.

When prompted about that notion, Harrison said he didn’t feel that he deserved that recognition.

“I haven’t thought about it like that,” he said. “I just hope this keeps going and I hope (the program) does well after I graduate.”