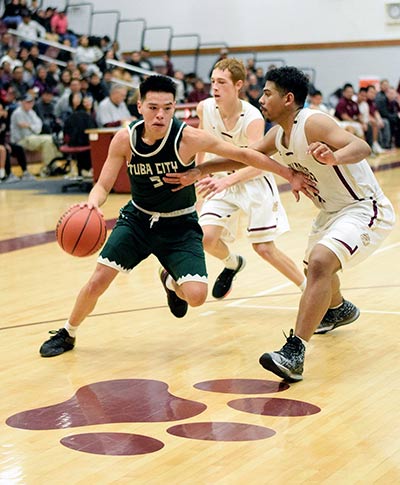 The Warriors finished the regular season with a 5-17 record one year ago with six of those setbacks being less than eight points.

This year’s team, which returns three veterans, had compiled an 8-7 record heading into last night’s 3A North Region game with Monument Valley under first-year coach Roger Tsingine. Results for that contest were not available at press time.

“I believe we can be one of the top four, or even top three teams in the conference,” Tsingine said. “We still have a long ways to go as far as matching up teams like Page and Chinle but I believe we’re able to do it. We just have to put four solid quarters together.”

Not since the Sedona Red Rock Invitational have the Warriors done that. In that tournament last December, Tuba City went 3-1 with its only setback to Coconino.

“We actually surprised ourselves,” said Tuba City junior guard Jeremiah Byjoe, noting the team was in sync for the entire tournament.

“We got everyone involved and our defense was real good,” he said. “We were communicating and everything seemed to click for us.”

Since then the Warriors have dropped five of their last 10 games. Last Thursday, they couldn’t overcome a barrage of threes from Winslow, losing an 80-49 decision. In that contest, the Bulldogs shot lights out by connecting on 13-of-32 treys.

On Saturday night, the Warriors rebounded with a 54-49 win over Window Rock to even their conference record at 1-1. Tuba City led by double digits for most of the contest before it withstood a late charge by the Scouts.

“We have a bunch of young guys that move up from last year,” he said. “We’re are trying to get them more focused on the little things that I know that is going to be a big step down the road.”

In addition to Byjoe, his top returners include sophomores Britton Hardy and Tyler Williams.

“A majority of our kids are first-time varsity players,” Tsingine said.

The Tuba City coach said Byjoe has been a big asset to the team.

“Jeremiah is an active leader,” he said. “He gives a lot of direction to the boys and it seems that the guys embrace what he has to say.”

With his team being so wet behind the ears, Byjoe said his role has changed somewhat.

“I’m trying to get more players involved,” the junior guard said. “Last year we had others that could create on their own. This year I’m trying to put the scoring and passing together.

“I’m mainly trying to lead the team the best way I can,” he said. “I want to be the example while on the court. I’m (also) trying to keep our energy where it needs to be.”

As one of the area’s best scorers and ball handlers, Byjoe said he likes drawing the opposing team’s best defender. Of course, that attention is just another way he’s gaining respect for his game.

As for last season’s playoff snub, Byjoe said that rebuff is what’s driving the team to win as many games as they can.

“We have the talent to go very far,” Byjoe said. “We just have to put it all together. I feel like we can win a lot more games. We just have to be patient.”

Like his pupil, Tsingine said his team is headed in the right direction.

“We’re still working and putting things together,” the Tuba City coach said. “Right now they’re looking good but I know we can do better. I’m just stressing to them that we have to work hard for everything we’re getting.”