50 Years Ago: Fair hosts winners of ‘The Dating Game’ 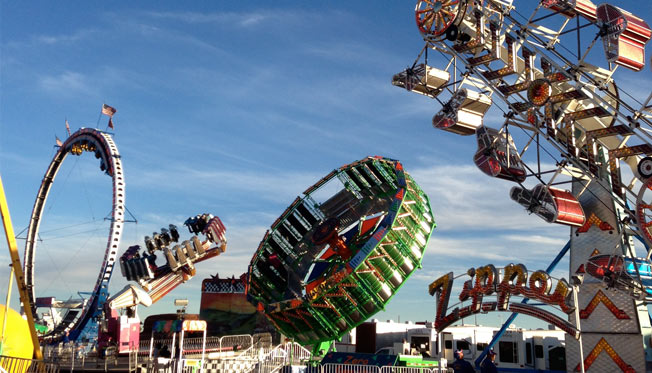 The 23rd annual Navajo Tribal Fair will get underway on Wednesday and fair officials are making plans for some special guests. Wilbur Jim, a spokesman for the fair office, said the winners of next Monday’s episode of “The Dating Game” will be arriving on Tuesday and will attend the fair after they enjoy an airplane tour of the reservation.

The fair entered into an agreement earlier this year with the producers of the popular NBC game show to make a visit to the fair the big reward on Monday’s show. Jim said this was a relatively cheap way to promote this year’s fair to a nationwide audience. Jim was asked, since the winner will be announced Monday night, this doesn’t give the winning couple a lot of time to prepare for the trip.

He responded by saying Monday’s episode was taped six weeks ago and the producers are just keeping their names secret until the show airs. Also scheduled to show up this year is the U.S. Marine Corps band. This isn’t costing the fair anything and was arranged earlier this year when members of the Navajo Code Talkers visited Washington, D.C.

The plane was to fly the band into the Window Rock Airport but someone with an understanding of the capabilities of the airstrip realized that it was not big enough to handle a plane that could transport a 50-member band. So the plane will land in Albuquerque and the fair will rent buses to bring the band to Window Rock for the annual parade and later a concert. The fair will begin at 11 a.m. Wednesday with the annual free barbecue.

The fair has purchased three tons of beef for the event and expects to feed 10,000 visitors. The big news this week, however, comes from federal court where DNA-People’s Legal Services filed a lawsuit demanding that the federal government start regulating traders on the reservation and stop the practice of “saturation credit.”

Today, when many Navajo families get monthly welfare checks, a trader allows them during the month to buy up to the limit of their welfare check. He then requires the family to list the trading post as the place to send the welfare check and when it comes in, the owner has the entire check signed over to him, leaving the family with no money to spend elsewhere.

Mitchell also asked the federal government to put a stop to having the trading post operators serve as agents for the railroad. The railroad still hires hundreds of Navajo men each year to work as laborers to build and maintain tracks, a job sought after by many Navajos.

But what the traders do, Mitchell said, is choose only those men that owe them a lot of money. The railroad worker’s salary is one of the largest in the area so they have enough to pay for their trading post debt as well as enough to live on. Navajos know this is how the jobs are allocated so this encourages Navajo families to go into debt to the traders in hopes of getting one of these jobs.

The lawsuit also asks the federal government to do something about the prices traders charged for their merchandise. The BIA did an annual survey every year comparing the prices charged at trading posts with those charged by stores in border towns for the same products. The surveys found that the prices in the trading posts were sometimes three times what was charged in the border communities.

The traders blamed the high prices on the cost of transporting the goods to their locations on the reservation but BIA officials estimated that should increase the cost by no more than 5 percent. The real reason for the stiff prices was basically greed, according to Mitchell. Because of saturation credit, their customers had no money to shop elsewhere so traders could charge whatever they wanted. Mitchell’s lawsuit wasn’t asking the federal government to regulate prices but to regulate profits.

He wanted a system established where traders were allowed to make a profit of a certain percent to be established by economists, something that would be fair for the traders but also consumer friendly. He also wanted the federal government to set up some kind of a governmental body that would listen to complaints filed by customers of the trading posts. That body would also have the authority to mandate changes in trading practices if the practices unfairly affected reservation consumers. Another factor that needed to be addressed, according to the suit, was the quality of merchandise sold by the traders.

Many traders offered the cheapest type of merchandise because that provided them the opportunity to raise prices the highest. And finally, the lawsuit wanted the federal government to enact regulations that would control the way the traders handled pawn, which was one of the major complaints DNA received annually from Navajos.

The lawsuit wouldn’t go anywhere – the courts could find no justification for the federal government to get involved in commercial operations on the reservation – but it did accomplish one thing. The accusations that the traders were abusing the pawn business attracted the attention of the Federal Trade Commission and others, which eventually led to public hearings a couple of years later and a set of new restrictions. Those restrictions, according to traders, took away the profits from the pawn business and eventually, one by one, they stopped taking pawn, forcing reservation residents to go to pawn dealers in the border communities.