Animals have always been a part of fairs but when you think of fair animals you usually think of cute 4-H’ers and their prize lambs and hogs. This year, the Central Agency Fair will be celebrating rez dogs. 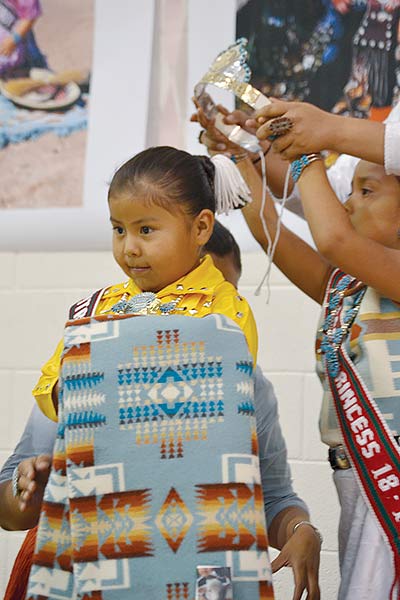 The first ever Bow Wow Dog Show will take place Saturday from 3 to 5 p.m. at the fairgrounds and feature such categories as Golden Oldie, Best Pubby, Rezziest Mutt and Most Talented. Registration is $5 and owners are welcome to enter their best friend in multiple categories. “It’s going to be a highlight,” predicted fair director Bess Yellowhair-Simpson. None other than famed sportscaster L.A. Williams has been recruited to announce the show.

“She’ll make it exciting,” Yellowhair-Simpson said. “When people hear her voice, they respond.” Another new event will be a gourd dance to honor veterans. That will take place from 11 a.m. to 6 p.m. on Saturday. “The theme this year is ‘Our Lives, Our Stories, Our Community, Our Nation,’” Yellowhair-Simpson said, “and our veterans are definitely part of our stories as a community and a Nation.” Co-grand marshals for this year’s parade will be Arizona state representatives Arlando Teller and Myron Tsosie, both from Central Agency.

“I am sincerely appreciative and humbled by this honor from my own community,” said Teller, who hails from Valley Store, Arizona. Teller said he intends to walk in the parade in front of a vehicle containing his mother, his sister and his aunt, whom he describes as “my support community.” Tsosie could not be reached for comment. Also honored will be the Chinle High School boys’ and girls’ basketball teams. “People really want to see them honored now that they’ve been recognized in that Netflix documentary (‘Basketball or Nothing’),” Yellowhair-Simpson said. “I haven’t heard from (Chinle High School Athletic Director) Shaun Martin yet, but I’m really hoping at least some of them can come home from college to participate in the parade.” Also receiving special honors will be last year’s Miss Ceremonial queen, Ashley Claw.

The parade will start at 8 a.m., just after a 5K fun run along the parade route. As usual, there will be several dances with locally famous rez bands. “I’m proud that this year we will have Neon Moon Express and Fenders II,” said Yellowhair-Simpson, “as well as EDM, who will appeal to the younger crowd.”

EDM will perform from 8 to 11 p.m. and the other two bands will be on tap from 9 a.m. to 1 a.m. Neon Moon will also play tonight from 4 to 9 p.m. and Friday from 9 p.m. to 1 a.m. Yellowhair-Simpson said she’s a little miffed at Apache County offering a competing dance at the same time and hopes it doesn’t siphon people away from the fair. “I hope people remember that the admission for the dances is a big part of meeting our expenses for the fair,” she said.

Today’s (Thursday) events include Youth Day at the Chinle Community Center, food and arts and crafts at the fairgrounds, the carnival and the Neon Moon dance.

Here’s the rest of the schedule: