If you are over the age of 55, it’s very likely that you can remember where you were 50 years ago this weekend. Several thousand Navajos converged on Window Rock that weekend for the opening of the first supermarket on the Navajo Reservation. 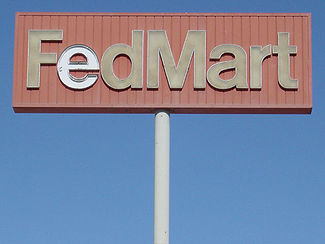 “FedMart opening herald new era,” proclaimed the Navajo Times in its front-page article the next week. If you don’t remember stopping by that weekend, there is a good chance someone in your family did. FedMart officials said they were expecting a lot of people but no one expected a crowd of that size.

The parking lot was packed with cars from the moment it opened up on Nov. 1 until it closed. By the second day, the management was calling for trucks to come by to replenish almost very section of the store because everything, from groceries to clothing, was fast being sold out. FedMart officials said it was the biggest opening in the company’s history and at the end of the first week of business, the new store was still breaking records.

Navajo Tribal Chairman Raymond Nakai said during the grand opening that FedMart would be the cornerstone of major economic development in that area. The tribe had received a $1.2 million grant from the federal government and had just broken ground east of the supermarket for a hotel and restaurant complex.

The tribe was also planning to build administration buildings north of the complex, he said. Nakai said he was also told that the company planned on building satellite branches throughout the reservation.

In actuality, the company only built one branch because of internal problems that by 1970 saw company officials cutting back on the stores off the reservation because of debt and increased competition from other supermarket chains. But the store in Window Rock was declared this week to be a great success with visits by a number of federal government dignitaries, including Stewart Udall, the Secretary of the Interior.

Udall, in his speech, alluded to the effect the new store would have on trading posts on the reservation, saying the day when the Navajos were burdened by stores that charged two or three times the retail rate for merchandise was over. FedMart promised and delivered prices that were so low that the store started attracting families from Gallup because its prices were lower than supermarkets in Gallup. So what was the most popular section of the store?

Ray Manzer, the marketing director, said it was hands-down the meat section. The company would have problems for weeks keeping enough meat on hand to meet the demand, especially in weekends. That’s the good news. Here’s the bad. Company officials reported problems almost immediately with shoplifters.

The company knew this would be a problem but because of the crowds and the fact that the aisles were jammed, it became almost impossible for store employee to keep an eye on everything and a lot of the food and merchandise was being taken and hidden inside loose clothing.

The store had security at the doors but so many people were coming in and out of the store throughout the day that it was impossible to keep track of everyone.

Store officials expected as much as 1 percent of the merchandise would be shoplifted but in the early days, it was suspected to be as high as four or five percent. Security did catch some people but in order to keep good relations with Navajo shoppers, very few were turned over to police. Instead, they were escorted off the premises and told not to come back. It was only after a person was caught twice that company got serious about having them arrested.

And very few ever received a jail sentence.

In other news, the Navajo Times printed a letter from a former waitress who worked at Hotel Shiprock. The author of the letter was as not named but the Times’ management said they felt her concerns were too important to be ignored so they printed it without her name. So what was she concerned about? The first part of her letter had to do with showers. She said that she received a lot of complaints from people who used the showers about how expensive they were.

Charging 50 cents for a shower was just too much, especially since the Indian Center in Farmington only charged 10 cents and supplied a towel and soap. The Farmington center also had individual stalls so a person could have a little privacy as opposed to Hotel Shiprock where no individual stalls were provided. She said she was also upset about how much dishwashers were paid.

They made $3 a day. How could anyone live on that? she asked. She said she decided to leave because of the poor pay for waitresses and the fact that they were expected to work without breaks.