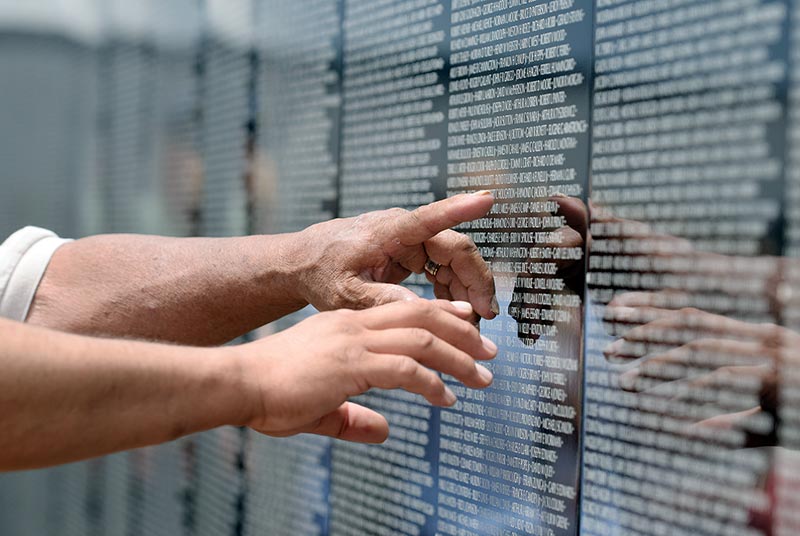 Navajo Times | Donovan Quintero A father and his son read the names of fallen military personnel who gave the ultimate sacrifice during the Vietnam War last Friday during the Vietnam Veterans Memorial, The Moving Wall, opening ceremony at Twin Arrows Casino Resort.

This being the Memorial Day issue for the Navajo Times in 1968, the paper honored those who have given their lives in the war in Vietnam since 1962.

The Times reported that there were probably more but given the level of reporting available at the time, this was the most complete list. These were the ones who listed home addresses on the reservation or in nearby border communities, but there may have been some who lived in places like Los Angeles or Phoenix whose names have not been turned over to the tribe.

By the time the war was over in 1973, the list would have included more than 70 names, according to figures issued by the tribe”s Office of Veteran Affairs in the 1980s.
In other news, Navajos may have been first among tribes in many things but it sure wasn’t housing, according to the Navajo Times.

By 1968, the tribe had built about 600 homes on the reservation but more than 10,000 would have to be built to match he number of homes the Sioux Tribe had built on the Rosebud Sioux Reservation.

Because of these figures, according to the Navajo Times, the tribe was sending a delegation to the Rosebud Sioux Reservation to study how they were able to achieve such a lofty percentage with the hopes that they would return with clues on how Navajo leaders could improve their housing numbers.

Robert Bennett, the U.S. commissioner of Indian affairs, and David Cargo, the governor of New Mexico, were among the thousands of people who came out on June 1 for the annual Treaty Festival held in Fort Defiance to celebrate the signing of the Treaty of 1868.

This was the 100th celebration of the signing and the historic significance of the event could not be ignored and tribal employees as well as organizations on the reservation went all out to make that year’s parade the best ever.

The parade, according to the Times, was more than a mile long and consisted of more than 75 entries. Those who attended had to get there before 8 a.m. to get a good spot then had to watch more than two hours for the entire parade go by.

Along with the parade, the chapter held a ceremony for a memorial recognizing the importance of the day.

Bennett, who once worked in Fort Defiance, gave a speech congratulating the tribe’s leadership on the progress that has made over the past hundred years.

Cargo also gave a short speech during which he quoted Ernie Stevens, a Navajo, who attended a seminar the previous week and opened up the proceedings by saying the Navajos “did not come to the conference to sell beads and trinkets but to learn now to set up industry on the reservation.”

The highlight of the festival, by all standards, was the presence of Mrs. Old Man Mud’s Wife and her twin sister, Mrs. Crookedneck, who came all the way from Tuba City to participate in the event.

The two were 104 years old and were the only living Navajos to have been at Fort Sumner during the captivity. Neither spoke but they watched the parade and shook a few hands before they began their journey home.

Their presence there, however, created s stir as reporters for the Associated Press and the Chicago Tribune were on hand to report on the event and their photos appeared the next day in hundreds of newspapers all across the country.

Navajo Tribal Chairman Raymond Nakai also gave a short speech in which he noted that the Navajos had gone from less then 10,000 in 1868 to more than 110 000 a century later.
Given this level of population growth, Nakai said he would not be surprised to see the tribal population surpass a million by the 200th anniversary.

Dick Hardwick, the editor of the Navajo Times, remarked in his column that while there was a lot of progress over the past century, some things never seemed to change. To prove that, he told this story.

He was at a conference the week before and when it was over a Navajo man came up to him and complained that a “paleface” had stolen his pencil.