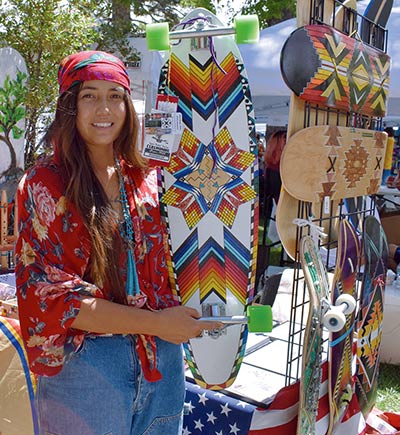 “Any art that comes from me is definitely ancestral based,” she said. “It’s more of a feeling.”

She likes to use colors that appear in nature as in the sunrise and sunset.

“Life is the biggest teacher when it comes to my art,” she said. “I just see the way Mother Nature does it and it’s like, I can’t do it like that, but I’ll try to get close.”

Greenwood got her first big break as an entrepreneur at 16 when Melinda Scott, owner of Scott’s Food Stand at the Window Rock Flea Market, bought her a pack of skateboards to paint and sell.

“She taught me a lot about work ethic,” said Greenwood, who worked for Scott at the food stand. “She’s the one that saw me designing boards and she gave me that start, so Scott’s Food Stand was my first, original sponsor.”

Then Scott set Greenwood up with her own sales booth at the flea market and, now 26, Greenwood hasn’t stopped expanding her creative and entrepreneurial footprint since.

She credits her family for her strength and perseverance.

Raised by her grandmother and great-grandmother in Sawmill, Arizona, Greenwood is the middle child out of five children.

“I am fortunate,” Greenwood said. “I didn’t know that what I had was so special until I moved to the city.”

She said a lot of her confidence comes from her outspoken siblings who are always pushing her to “be the best” at whatever she does.

Greenwood also learned the art of wood burning, which she uses to engrave designs into her skateboards and flutes, from her late uncle.

Her uncle was master flute maker and flute player Virgil Teller, who taught her brother Levi Bowman the art of flute making as well.

Together, Greenwood and Bowman have kept the family flute-making tradition alive in their uncle’s honor.

‘Trained by the streets’

These days, Greenwood divides her time between her home in Phoenix, Venice Beach, California, and her traditional homelands.

She says she started skateboarding not as a form of recreation, but out of necessity and as a “transportation tool” when her family moved to Phoenix.

“I learned to love the skateboard because I found it useful to my life in the city,” she said. “I didn’t have a car so I was skating everywhere and I got really good at navigating my skateboard.

“I really got trained by the streets,” she said, “with uneven surfaces, rocks.”

Greenwood’s second big break came four years ago when her talent was discovered by a skateboarding company, Propel Skateboards, as she was teaching children how to skateboard at the famed Venice Beach Skatepark in Los Angeles.

Greenwood made the trip to Venice Beach just so she could skate the park herself but Propel hired her on the spot to become part of their team of paid teachers.

They also invited Greenwood to become an apprentice to learn the process of making skateboards from scratch.

“They taught me everything I know about pressing and cutting skateboards,” she said.

Last year, Greenwood qualified for the tryouts for the U.S. Olympic skateboarding team and made it to the semifinals.

She learned that she needed world skateboarding contest points from outside of the United States to advance to the Olympic Finals.

“You’ve got to find someone who’s going to help you fly abroad and do contests just so you can have the opportunity to have world skateboarding points,” she said.

That said, Greenwood believes the time has come for the Navajo Nation to build an Olympic training facility to support youth in every athletic discipline, including skateboarding.

“It’s time to have Olympian Natives,” she said.

Greenwood says when she is teaching youth how to skate, it’s as much about learning how to fall correctly, which requires strength and flexibility.

“Movement is medicine,” she said. “In order to be skating on a level that you want to be skating at it’s almost impossible to make it there if you’re not taking care of your body, because when you fall, boy, it hurts.”

She said practices like running and yoga are a good place to start in preparation for skateboarding.

For her next venture, Greenwood intends to start a distribution house in the Gallup area where Native American skateboard companies across the country can ship out everything they sell online.

“When I was in California learning how to make skateboards and ordering supplies, I learned very quickly what a distribution house does,” she said.

She said she found out that even the big skateboarding brands do not ship skateboards out of their own warehouses.

“They hand their skateboards over to a distribution house that sells everything needed for skateboarding,” she said.

“Whether I open the facility on Navajo or the Navajo Nation wants to help me make that facility,” she said, “skateboarding is now in the Olympics and it should be treated with all respect and should be taken very seriously.”

Greenwood has already set up a limited liability corporation and has secured the required sellers’ permit in order to set up the Native skateboard distribution hub.

“As soon as I got my wholesale license, being able to buy in bulk, I saw how my people could benefit from having a distribution center,” she said.

If all goes as planned, she’s also hoping her distribution house will be able to sponsor her entries into foreign skate competitions so that she can earn points toward future Olympic Trials.

Greenwood said that, without a doubt, her determination, confidence and focus on self-reliance were fortified in the past year.

“During the pandemic, for sure, is when I really figured out you’ve got to be your own hero because no one’s coming to help,” she said.

With her skateboarding skills and designs, she hopes to continue to inspire youth to try skateboarding if that is what they desire.

“It’s possible with the right amount of support and a strong will,” Greenwood said. “I hope that these skateboards that I create last a lifetime so when people see them it opens that conversation up about Natives still being here and doing things that are modern.”