When we caught up with Jaden Redhair last Thursday, he was making a grocery run for his family, helping his folks avoid a trip to the store as the COVID-19 infection rate on Navajo reached an all-time high. At the same time, the new Nalgene water bottle featuring his “Tó éí Iina” design had just sold out – again.

Which means he was also bringing water to a rural Navajo community. He had to admit, it felt pretty good. “Doing something I like and getting paid for it while also helping people — it’s pretty crazy!” said the 20-year-old graphic designer and engineering student. “I didn’t expect it to take off the way it has.”

Much of that has to be credited to Redhair himself, said Elissa McGee, general manager of Nalgene Outdoor. “He must have a lot more people on his social media than I do,” she quipped. “He put it on his Instagram and the bottles sold out within days.” 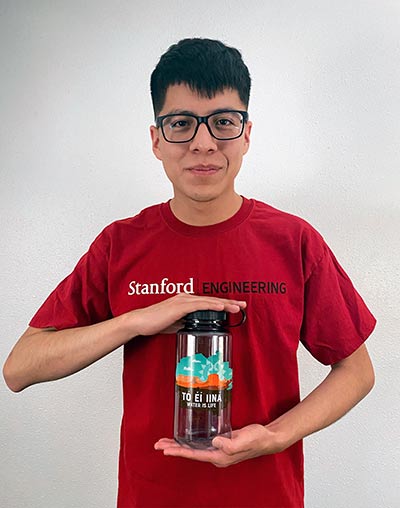 SUBMITTED
Jaden Redhair of Window Rock poses with the water bottle he designed for Nalgene as a fundraiser for water projects on the Navajo Nation. Redhair, 20, is also an engineering major at Stanford and does design work for the university’s football team.

They’re currently on their fourth production run. Redhair’s design features a scene from Monument Valley inside a frame shaped like the Navajo Nation. Faintly visible in the background of turquoise sky is the pattern of a Navajo basket. Redhair said it symbolizes the spiritual importance of water in Navajo cosmology. The words “Tó éí Iina” are emblazoned across the bottom of the design.

Nalgene, which bills itself the original reusable water bottle company, started its Nalgene Water Fund in 2019 as a way to return some of its success to communities that not only don’t have water bottles — they don’t even have clean, easily available water.

“A lot of the big water charities were focusing on the Third World, and that’s certainly the obvious place to start,” said McGee in a telephone interview. “But when we looked at the issue, there were a lot of American communities that needed help. “It’s kind of appalling, when you think about it … as industrialized as this country is, there are pockets across the nation that don’t have something as basic as a reliable source of clean water.”

Nalgene partnered with the U.S. Water Alliance to find grassroots organizations to work with, and the alliance led them to Dig Deep and Community Outreach for Patient Empowerment, both of which were already involved in water projects on Navajo. Nalgene decided that COPE, which was planning a series of water filling stations in remote areas of the reservation, would be its short-term partner, while it would work long-term with Dig Deep to build water infrastructure.

Then there was the matter of how to raise the money. “We’re a pretty well-known brand,” said McGee. “We thought, ‘How can we use that to cast a light on some of these things people aren’t aware of?’ That’s where the idea for the specially designed bottles came from.”

COPE recommended Redhair, who had done some posters for them that, appropriately enough, urged Navajos to drink more water as opposed to soda and other sugary beverages.

Five dollars of the $15 purchase price of each bottle will go the water effort on Navajo. According to McGee, six locations have been identified for the filling stations, and Nalgene will also donate 90 13-gallon carboys to help people carry the water home.

The filling stations will be placed at chapter houses, trading posts, schools and other places where people gather. “The idea is to decrease the distance people have to drive to get water for their daily household use,” McGee explained.

Redhair said he’s grateful on behalf of Navajos less fortunate than himself. “I’m from Window Rock, so I grew up with running water,” he said. “But I’ve helped my grandparents in Sanders haul water for their animals, and I definitely know a lot of people who have to haul water. So I’m happy to be a part of this effort.”

McGee said meeting Redhair, as well as the young people of Flint, Michigan — another location the Nalgene Water Fund is focusing on — has been a highlight of the experience. “These young people are going to change the world,” she said. “We feel lucky to be working with them.”