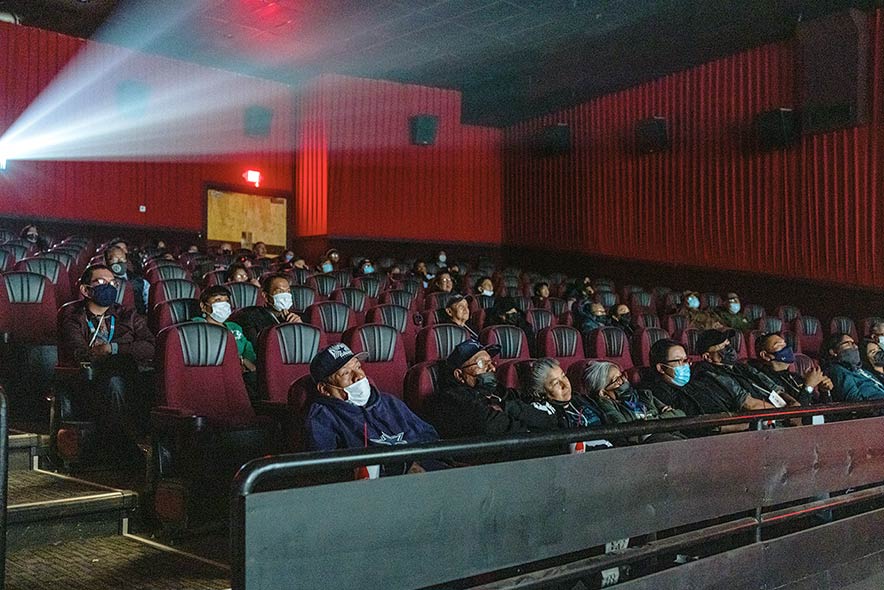 The Window Rock Cinema was filled with laughter and cheering when the Navajo Nation Museum premiered its third film dubbed in the Navajo language, “A Fistful of Dollars,” on Tuesday night.

The film was made possible by the Kino Lorber company in New York City and the Navajo Nation Museum.

“That’s a rare thing and all of you guys who worked on it, you should be very proud of that,” he said. “It’s a one in a million thing that you guys worked on.”

It was recorded at Native-owned Native Stars Studios in Gallup. The cast was completely made up of Diné voice actors.

Many of the voice actors for the film enjoyed everything that went into the process.

Some of them, along with audience members, talked about how the movie being a Western was their favorite part of this project.

Wheeler said he made this movie for the older generation of Navajo people because they requested it.

James Bilagody, the voice for Benito Rojo, said he loves old Westerns and has watched “A Fistful of Dollars” countless times and did not think that one day he would be a voice in it.

He also said Western movies make up the base of what is in Hollywood right now, especially in space movies like “Star Trek” and “Star Wars.”

“All those are basically Westerns and the idea of a person falling in love with another person and riding off into the sunset, that all started with Westerns,” he said. “Now you see them in love stories, in Christmas stories, it’s kind of the backbone of Hollywood.”

Not everyone had the same reason for loving Western movies.

Willie Castillo, the voice of Piripero, said he loves old-school movies and said he had fun recording the movie.

“He likes the shooting,” Earlene Castillo, the voice of Consuela Baxter and Willie’s wife, joked.

Leandra James, who attended the premiere, said Western movies are based in the country side of living and she believes a lot of older Navajos can relate to it because it is similar to their lifestyles.

Shawn R. Jim, the voice of Clint Eastwood, holds the same beliefs and said Western movies play a huge role in the lives of older people because it reminds them of a simpler time to which they can relate.

One of the amazing aspects about this film is the effort that went into the translation.

The movie was translated from English into Diné Bizaad by Diné professors Jennifer Jackson Wheeler and Joe Kee.

“They’re (Wheeler and Kee) a rarity because not only can they translate but they translated to match the lip movement of the character that you can see,” said Manuelito Wheeler.

Jennifer Wheeler said it took her and Kee about three days to translate the movie. She said they started with the script in English and talked and typed it out in Navajo.

After this, they watched the movie while they translated to match the lip movement of the characters.

“When that (the script) is ready, we take turns in the studio recording what we translate because many of our people who are voice actors, they can’t read it, so they listen to the audio,” Jennifer Wheeler said.

She said that throughout the entire process, she and Kee supervised each voice actor to make sure pronunciation was right.

The reinforcement that dubbing movies in Navajo is important for youth and language revitalization was repeated throughout the night.

Jennifer Wheeler said older people need to accept the fact that Diné youth are losing the language due to many families not speaking Diné Bizaad in the home.

She said youth are also into pop culture, which is where dubbing these films is important in getting their attention.

“With all the different genres of media, one of them is film,” she said. “That’s one way to show the youth that our language is versatile and our language can be adapted in any setting.

“We hope that it gives them hope and shows them that it is possible to learn our language,” she said.

As Navajo people, Jennifer Wheeler hopes that we continue to support our youth and help them learn the language.

Jacob Bitsoie, the youngest voice actor in the film, also believes in the importance of youth learning the Navajo language.

“I think it’s awesome for movies to be in Navajo so younger generations can carry their culture to other people,” Bitsoie said.

Ravonelle Yazzie, voice actor of Marisol, said dubbing movies in Navajo is important for language revitalization and incorporating age groups into a film to build relationships between generations.

She hopes these films continue to be made with more films with female leads considered.

The film will be shown in Window Rock, Kayenta and Tuba City over the next few weeks.

The Window Rock Cinema was filled with laughter and cheering when the Navajo Nation Museum premiered its third film dubbed in the Navajo language, “A Fistful of Dollars,” on Tuesday night.