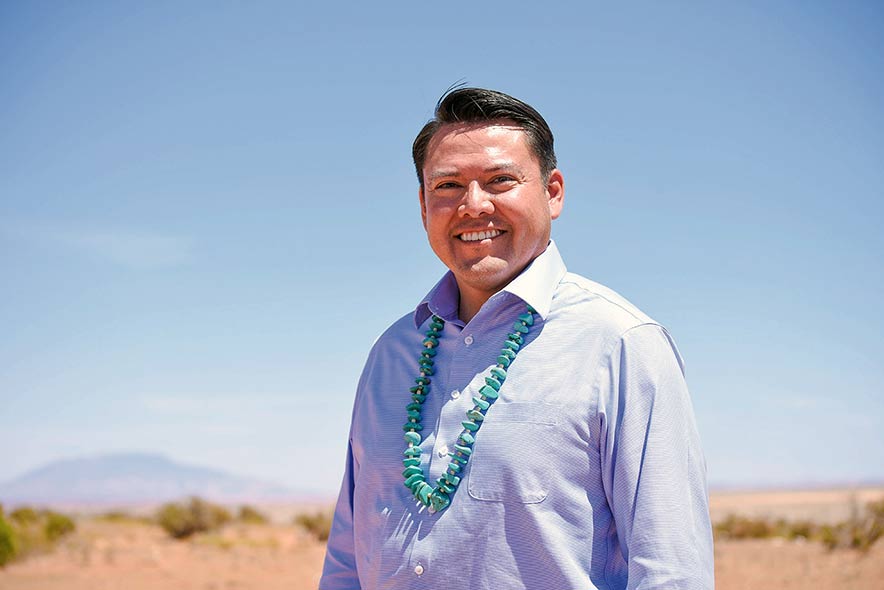 Navajo Times | Krista Allen
Greg H. Bigman, 41, stands in the foreground of Naatsis’áán laccolith during his first campaign rally in Kaibeto. Bigman, the Diné College Board of Regents president, is running for Navajo Nation president.

The Diné College Board of Regents president announced in late April he’s running for Navajo Nation president, injecting a progressive voice into the contest and championing economic equality.

Greg H. Bigman, 41, said he’s serving his fifth term as board president, a position he was elected to in fall 2019. Now, he’s considering a run for the Nation’s highest office.

He’s a scientist, among other things, of distinction. Bigman’s originally from T’iis Názbąs, where his mother, Marie, calls home. His father, Howard, is from the Tsai Skizzi area in Kaibeto.

Bigman believes he’s the change agent to improve life in Diné Bikéyah, and he knows he can make an impact on public services and how they are disseminated.

He said he would do so by changing the narrative of the Navajo government.

“These are things like (making) sure that our elders have good care (and) that we have good education and health care,” Bigman explained. “The pandemic showed us many of the things that were wrong not only internally but also (externally).”

Bigman said he envisions economic growth for the tribe – faster growth, more jobs, and less inequality – and an economy on a healthy trajectory through necessary policy interventions that would strengthen that growth.

He said he would do so by building an economy of the future, from physical and technological infrastructure – such as roads and broadband – to clean energy.

“Every year, you see the same priorities,” he said. “How do you change the narrative in order to actually have something that’s impactful?

“When a president goes into office, there are constant fires after fires,” he said. “This is really about knowing how to prioritize and say, ‘This is what needs to happen.’”

Many drastic changes in Diné Bikéyah would happen through amendments to Title 2 of the Navajo Nation Code, considering the hurdles involved, said Bigman.

“(Getting) services disseminated and money trickling down the chapters by helping support regional development – that becomes the key,” he said. “A lot of these economic development plans, sometimes they’re hurtful because they require a waiver of sovereign immunity. So, having a transparent government is also very important.”

Of the numerous pressing issues troubling Diné Bikéyah, Bigman said when it comes to policing and the Navajo language, implementing change requires a coordinated approach.

“As a person, I’m working on that as well, and it’s not just because of this election,” Bigman said of the language. “It’s something I’m passionate about. I’m not fluent.”

“It’s about bringing the community together as well,” he said. “And that hasn’t happened in a while because of the pandemic. Way back when community events happened, there was probably less crime.”

Bigman’s distant relatives were involved in the June 2011 shooting that resulted in the death of a Navajo police sergeant who responded to a domestic violence call at a housing complex in Kaibeto.

Before considering the run for president, Bigman said he worked as a basketball coach, financial broker, educator and scientist – a cancer researcher.

He earned a bachelor’s in 2003 in biochemistry and molecular biology from the University of New Mexico.

The bill (CAP-23-22) amending the charter of Diné College, was approved on May 6. It would allow the college to modernize operations and facilities, seek alternative sources of revenue, and professionalize the Board of Regents.

Bigman says he’s ready and fit to lead the largest tribe in the U.S. He envisions a social innovation framework that reflects a social contract.

“One of the most important things is sitting down with (Diné) and listening,” he said. “I know my ideas (will) get better (as) I listen to people and hear their input.

“They want to see better services; they want a constitution,” he said. “A lot of them talk about issues with leasing under Title 26 (Local Governance Act). The other thing I’m hearing is better health care and education.”

He added: “These are all great priorities. It’s finding a way to position the government to (ensure) that our people are in a better position so services can get to them.”