The dancing studio Kaylissa Logan practices in is mostly empty, a far cry from what it’s usually like. In addition, she trains while wearing a mask, making it a little hot and difficult to breathe, but the 10-year-old continues on. 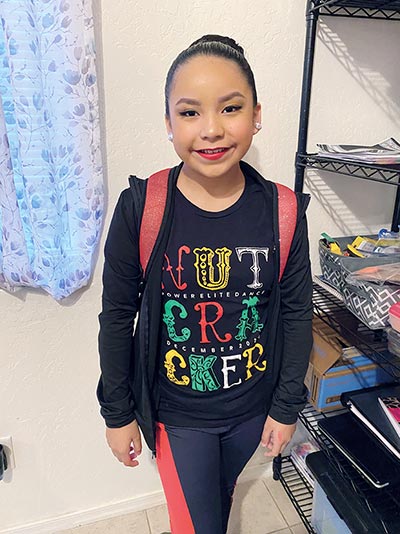 Courtesy photo
Kaylissa Logan, 10, is a dancer whose first competition of the year is coming up next month in Safford, Ariz. Her family moved from Chinle to Globe, Ariz., in 2014 and not long after that she became interested in dancing.

Her first competition of the year is coming up next month in Safford, Arizona. It will be her second time performing solo and she is determined to be ready. Kaylissa is the youngest of five siblings, children of Aaron and Nadia Logan.

Her first clan is Edgewater and her second is Redhouse. Part Navajo and part San Carlos Apache, she and her family moved from Chinle to Globe, Arizona, in 2014 and not long after that, Kaylissa became interested in dancing when she was five years old.

Now she can dance ballet, jazz, lyrical contemporary, hip-hop and tap. “I was just watching YouTube then I saw this video and I clicked on it and I was watching a dancing video,” Kaylissa said. “And I asked my mom if there was a dance studio here and she said, yeah, and I told her I wanted to do it. “It (dancing) makes me happy and I get to learn different stuff every single day,” she said.

Kaylissa has about 10 performances under her belt. In 2019 she and her company were invited to open for a Phoenix Suns game. In July they traveled to Las Vegas for a four-day competition, the Tremaine Dance Convention, where they met and even trained under Paula Abdul, a world-renowned dancer and performer.

The school Kaylissa goes to is the Power Elite Dance Academy, which is owned and directed by Tina McCarey. McCarey is a dancer herself and performed in 13 countries before becoming a full-time instructor. The academy belonged to her mother before her and it will be celebrating its 50th anniversary soon.

“We are definitely a youth development program, and we have seen young girls and boys (learn),” McCarey said. “The kind of benefits I have seen is self-confidence, it makes them more independent, being able to express themselves through music. “I do feel like its healing to the heart, mind and the soul,” she said, “definitely a bonding sport, something you bond (over) with your instructor.”

Although there are many who see dancing as little more than a hobby, McCarey sees it differently. It’s an activity that can be just as stimulating as any other sport. It helps young adults deal with aggression and teaches them valuable lessons.

She also points out dance instructing is actually a well-paying job that has helped her former students. In her 30 years of teaching, she has helped kids who have been dealing with depression or home troubles. She told them that they matter and helped continue their growth into wonderful people. She feels like this is her calling, helping children through dance.

“Some kids are into athletics and football, volleyball – but dancers, there’s just something different about a dancer,” McCarey said. “Dancers carry art, spirituality … I think they are very close to the spirit because they can sense it and feel it through music.”

McCarey has seen Kaylissa grow ever since she first started taking lessons at the studio and she has seen the little girl become a leader. “She has danced with us,” McCarey said. “She has been with us for five years and that little girl had come from being a shy, won’t talk, won’t look at you, to now she stands in front of the class and leads the class.

“She loves little kids,” she said, “she definitely is an example to those kids that are younger than her. I feel that as she grows into a young woman that she will have many little girls watch her and want to be like her.”

Kaylissa’s temperament also draws other girls to her. “Kaylissa has that in her,” McCarey said. “She is a creator, she is a beautiful little girl who is kind and gentle to everyone. I don’t think I have ever heard her snap at a little kid or anybody. She never back talks to me, her teacher, she’s always been respectful. And, yes, I think she will make it in the dance world.”

While half the class is made up of Native kids from the nearby San Carlos Reservation, Kaylissa is the only Navajo in the dance company. According to her mother, Nadia Logan, Kaylissa has been in love with dance since she first started.

“For me as her mother, just seeing her happy makes my heart happy because I know she loves dancing,” Nadia said. She remembers the times when Kaylissa would become ill or injured and was unable to participate in classes. “She was able to still attend, but was just to watch,” Nadia said. “Just seeing her being upset because she can’t dance, that just shows me she has that love for dance there.”

Nadia doesn’t let practice interfere with her grades, however. Currently she is a straight-A student at Destiny School in Globe. “She is mature for her age,” Nadia said. “I see it. She is very well behaved. She is a very helpful person. Not just out in public but also here at home. She is dedicated to being on top of things, in which I believe, if anything, she just wants to do good.”

Despite being far from the Navajo Nation, the family still makes regular trips to see their relatives. “Every time we went back, and this was before COVID, we always got to see family,” Nadia said. “And she was always excited to show her cousins what she had learned within being in dance.

“I know a couple of times she was asked to perform at a birthday party or just to get together just because that’s what we do in my family,” she said. “Last year before March, her grandpa passed away and she did a little dance in dedication of her late grandfather, she did that in front of everyone at the reception. It meant something to her.”

Kaylissa is the first dancer in the family and she loves sharing her talent with her family, especially with her late great-grandmother on her father’s side, whom she helped take care of in her final days.

“(Great-grandma) always encouraged Kaylissa, ‘Do your best’ and she would always tell great-grandma, ‘OK, I’m going to go to dance’ and great-grandma would say, ‘OK, show me, show me what you learned today.’ “And as old as great-grandma was when she passed away — I think she was like 93 — she would sit in the living room watching Kaylissa dance and just seeing her happy … it was just touching,” Nadia said.

It hasn’t always been easy for Kaylissa to dance. In order for her to make it to competitions, the family would have to hold fundraisers, especially to go to places like Las Vegas. The little dancer won a $500 scholarship for dancing, which helped.

The COVID-19 pandemic has made things difficult, though. The academy was closed for two months not long after the start of Kaylissa’s spring break. In May the gym slowly reopened, but they did virtual classes for a while. Now they are trying to have in-person classes again, but students must always wear masks and social distance.

Normally the school would have a big performance for families at the end of the year. This year they had three small performances so that the crowd would be smaller. The adaptations have not deterred Kaylissa’s dreams, nor dampened her admiration for those who have inspired her.

“When I grow up,” she said, “I want to dance all over the world because of one of the dancers … Her name is DJ.”

An instructor who taught and inspired Kaylissa is Djaniel “DJ” Holzkamp-Carter. DJ has always taught her young pupils that anything is possible. A former Phoenix Suns dancer, the choreographer has also appeared in Sports Illustrated magazine and has done a few music videos as well.

Her performance and dedication have inspired Kaylissa to follow in her footsteps as she hopes to become a professional dancer as well.

“Kaylissa is one of a kind,” McCarey said. “There’s not many kids that are as gentle and sweet as she is. We have enjoyed every moment with her and I see her as a great person from our community. “I hope she’ll get out, go to college and see the world,” she said, “but I know that someday if she comes back to this area, to her native land, then she will be a wonderful person that will raise up individuals to better themselves.

“I think she’s one of those people who will change the world,” she said.