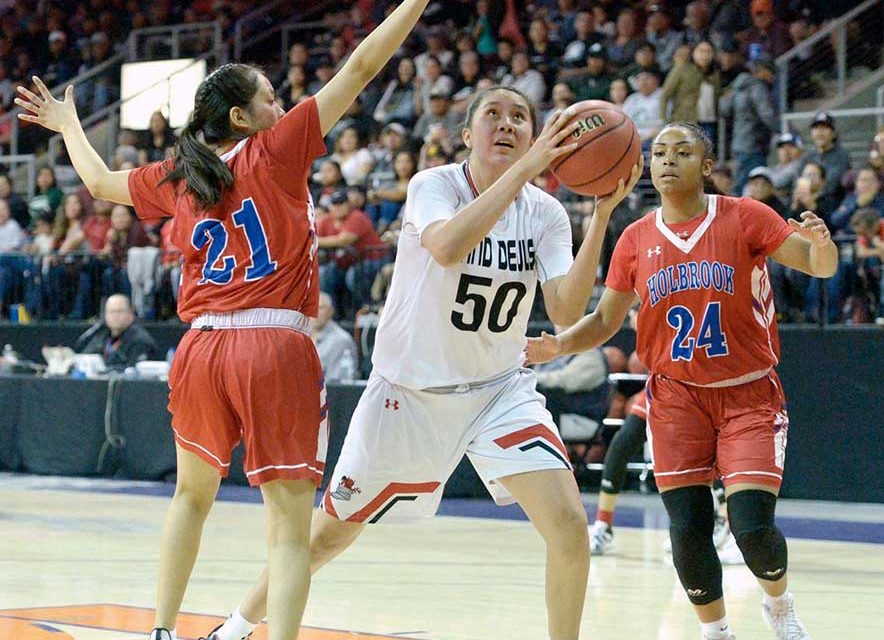 File photo In last year’s state playoffs, then-Page junior Torrance Begay (50) gets by Holbrook players Desirae Bain (21) and Madison Chappell (24). Page High is going ahead with its winter sports with basketball, soccer and wrestling for the upcoming season.

Page High and St. Michael Indian School are planning to have a basketball season this year — so far, the only rez schools to do so. Because of the high number COVID-19 cases in the state, both schools promise to make health a number one priority, as expressed by Page High’s Athletic Director Ernest Rivers III and St. Michael AD and head girls’ basketball coach Carl Adams.

“I think there are going to be some challenges because obviously COVID-19 is going to pose some; however I think our kids are just happy to play, our coaches are happy to play,” Rivers said.

This season will be different in many ways for the teams. Only varsity will be competing for St. Michael while Page will have varsity and JV girls. In addition, both teams will be following all COVID-19 regulations set forth by the Centers of Disease Control and Prevention and reinforced by the Arizona Interscholastic Association, from mask-wearing to deep-cleaning the gyms after each practice and game session. 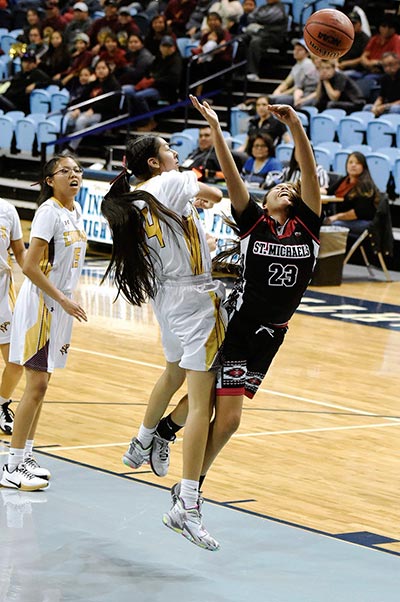 File photo
In this file photo, St. Michael guard Gabrielle Simpson (23) gets the ball knocked away from her during the 1A North championship game last year. St. Michael is the only reservation school that is going to play basketball this season.

“Technically we’re the only ones [playing this season],” Adams said. “I know Page is competing this year but technically they’re not on the reservation.”

In order to play, Page High has switched its region to 3A North Central and St. Michael changed their conference to 1A North East. This way the two schools are able to find other institutes to compete against.

Adams also said they would follow the two-week mandatory quarantine for the whole team should anyone on the team — coach or athlete — test positive.

Although such measures will take a deep cut out of an already short seven-week season, both ADs are firm when it comes to student safety.

The teams have been practicing since December, before the official AIA start date for winter sports was pushed back due to an uptick in COVID cases in Arizona. Despite this, the teams continued their training virtually.

“We log on, go online, do our virtual practices, do our dribbling, do our shooting, do our conditioning and so it’s really interesting using the advantages of technology to help us with our practices and making sure these kids are conditioned, fit, and healthy and ready to go for the first game,” Adams said.

The beginning of winter season was set for Jan. 5 and the first basketball games are to take place next week.

The new schedule for the teams can be found on the AZprep365 website. Since the CDC and the AIA warn against crowds, neither school will permit fans to attend the games; however the schools will livestream their games via their respective school websites and their social media accounts.

Adams also cautions that not everything is set in stone. The schools that are playing this season are still getting their schedules together and there is also the threat of the virus forcing a school to cancel a prescheduled game.

“Currently right now a lot of people are in the scheduling process,” Adams said. “We’re back today for virtual learning, but everybody is still scheduling games and still getting their schedules together and everything.”

One additional hurdle St. Michael faces is finding an arena to host a home game. Their gym doesn’t meet measurement requirements to allow competition so they are reaching out to other schools to see if they can borrow one, which is difficult as all gymnasiums on the Navajo Nation have been closed. If need be, Adams said the team is prepared to play all their games as away games.

Page will also be going head with its other winter sports, such as wrestling, soccer and activities like color guard and cheer team. But Rivers states the same COVID procedures will also apply to them.

The basketball teams themselves are small for both schools, but they have enough participants to make a team. As Adams said, the choice is up to the individual student whether they feel comfortable competing or not.

“We understand, especially with the year we’re dealing with,” Adams said. “We’re fortunate enough to have enough people join up for basketball and they understand that we can only limit to 10 players this year for boys and girls, and we did a virtual tryout for everybody.”

Both athletic directors are fully aware of the threat of the virus, but they assure that they are taking all the necessary precautions seriously. Their concern is for their students’ and coaches’ wellbeing, but they also wish to give said students their time to shine on the court, especially the seniors.