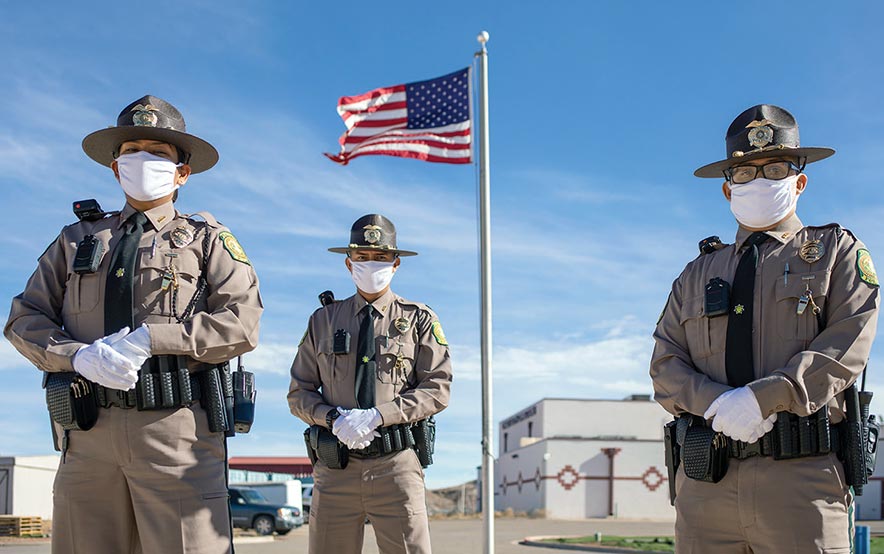 Class 55 defied the odds a global pandemic placed upon them as eight police recruits graduated Saturday and became the newest members of the Navajo Nation Police force.

It was a different kind of police graduation the department held at the Navajo Police Academy in Chinle.

Usually the graduation is held inside the Wildcat Den so family, friends and fellow officers can fill the gym and watch as the newest police officers take their oath. But Class 55 has been interesting from the beginning. In March the class was supposed to begin but had to be postponed a few weeks due to COVID-19.

Knowing the need for more officers, the academy resumed with 26 recruits and then within a matter of days the academy had a small outbreak of COVID-19, which forced it to shut down for a couple weeks.

“It was an interesting class considering they had to go through COVID-19 and modify how we operate,” said Navajo Police Chief Phillip Francisco. “It was kind difficult to arrange and plan with COVID in mind.”

Not due to the virus, but the class size dwindled either because recruits decided it wasn’t for them or they had a hard time with the curriculum.

“Some folks felt it wasn’t for them,” said Recruitment Training Officer and Tuba City District Cmdr. Robert Williams. “Some had issues with the curriculum. It’s challenging and I think maybe some underestimate the curriculum. So we ended up with eight, and they are eight hard-chargers.”

With modification still in mind, the graduation held was live streamed and held outside in a tent in order to practice social distancing. Only a few family members were allowed to watch in person, and recruits were sure to wear their masks.

Jasmine Peaches, 28, a mother of three, stood next to her classmates Aaron Brown, 24, and Klyton Belone, 22, just before their final inspections.

Peaches described the day as “surreal” because the process to get to that graduation day was long. She said her youngest son was only three months old when she started the process to be a part of the academy, and now he is one. “At the beginning it felt like it was never ending,” said Peaches, who will be working with the Kayenta District. “I wanted to join to help with issues in the community and how they say there isn’t enough police officers. I also wanted to be a role model to my kids.”

When it comes to concerns over COVID-19, and having the class shut down, Brown said he wasn’t too concerned. “We knew the challenge and we knew what we are getting ourselves into,” said Brown, who will be joining the Window Rock District. “We also knew the consequences of COVID, but we all chose to be here for a reason and that is to serve our communities and protect our communities.”

Also a father, Belone agreed that it was a long process and COVID-19 was a worrisome thought but for the most part serving his community was always the priority. “We wanted to be here,” said Belone. “The drive and determination that it takes to make it all the way, it was a long journey. We all knew COVID was there but it was important we got this done, not only for ourselves (but) our community.”

In a time of national turbulence between cops and citizens, that type of friction isn’t found on the Navajo Nation. Francisco explained Strategy Matter, a consulting firm, did surveys and although communities aired grievances about response time, dispatch issues, and other problems, communities wanted more police presence.

The next Navajo Nation Police Academy class is slated for March. There have been been well over 100 applicants and Francisco said there are about 30 who are good potential candidates. “Our goal now is to get more recruits to the academy and get more officers out there on the road,” said Sgt. Fabian Thinn of the Tuba City District.

“With the pandemic going on, right now is the time to serve and protect the community,” Thinn said. “We need all the help that we can to get young Navajos to come out.”