A dream sparked Brian Young to write “Healer of the Water Monster,” a children’s story about a boy’s encounter with one of the Holy People.

Faced with rejection notices from dozens of agents and publishers, he said it took seven years to get his book published.

Then, he received a positive response from HarperCollins’ Heartdrum – a collection of books by Native American authors. 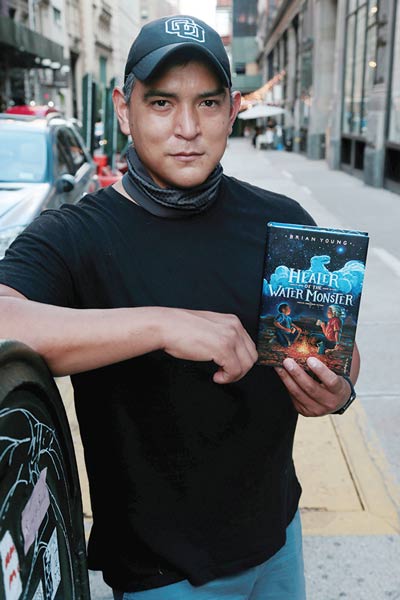 Courtesy photo | Diné Studies Conference
In his virtual talk, Brian Young, the author of “Healer of the Water Monster,” encourages Navajo citizens to write and publish.

“This is hugely important for Native writers all across the United States,” he tells listeners tuning into Diné Studies Virtual Talk series. “HarperCollins is committed to publishing Native stories by Native authors.”

Young is one of several Diné authors giving virtual talks during November’s Native American Month. The talks are sponsored and hosted by Diné Studies Conference, a nonprofit that hosts conferences, workshops, seminars and the virtual talk series.

“I am here to tell anyone who wants to write their own stories, you can do it!” Young said during his hour-long engagement with listeners that included an introduction in the Navajo language, reflections on how the stories saved his life and excerpts from the book.

“Healer of the Water Monster” is about a boy who leaves video games behind to spend summertime at his Nali’s homestead where there’s no running water, electricity or cell service.
But there are stories, traditional stories that offer lessons and enhance healing.

“I was so very fortunate to be taught these stories (by my Nali),” Young said. “The stories were often about dangers – cliffs, thunderstorms, flash floods – the monsters were metaphors of those dangers.”

He points out there are many more stories to be told and a need for Diné authors to tell them.

“If there is anything I want you to take away from my talk, it’s the realization that enemies have modernized,” he said. “They are now global warming, racism, uranium mining and substance dependency.

The Dine’ Studies Conference newsletter lists 2,000 subscribers, many of whom are teachers looking for educational content.

“We (the board of directors) are aware that there is a real need and desire for work around Navajo issues,” Greyeyes said. “Teachers especially are needing this type of material.”
During the month of November, Miranda Haskie brought attention to the book she co-authored – “The Future of Navajo Education.”

According to an online description, her book explores organizational change that incorporates harmony with the natural world and social responsibility in accordance with Diné philosophy.

Lloyd Lee also presented his book, “Dine’ Identity in a 21st Century World.” His research focuses on issues such as Native American identity, leadership, philosophies and Navajo Nation building, according to an online bio.

Coming up on Nov. 30, will be a talk by Farina King, Diné, on “Returning Home – Diné Creative Works From the Intermountain Indian School,” which she wrote with Michael Taylor and James Swenson.

“The board discussed bringing awareness to some of these books,” said Greyeyes.

These include Ezra Rosser, a law professor at American University who wrote “A Nation Within: Navajo Land and Economic Development”; James Swensen, his work as an American photographer capturing the American West in pictures; and Michael Taylor, co-author of “Returning Home – Diné Creative Works From the Intermountain Indian School.”

There’s more talks to come.
With the success of the November talks, Greyeyes said a discussion will be offered monthly from now on.

One of them most likely will be presented by Greyeyes. She wrote “History of Navajo Nation Education – Disentangling Our Sovereign Body,” which is scheduled to come out after the first of the year.

“Wendy Greyeyes is essential reading for policymakers and advocates for self-determination in the education of Indigenous people,” wrote Harvey Rude, director of the Colorado Center for Rural Education.

“We are on the lookout for new authors,” she said.

Added Brian Young, “Young Navajo readers deserve to see a representation of themselves in a modern context.”
Young has a sequel to “Healer of the Water Monster” coming out soon.