‘The ways of our people’: Centennial Indian Market winners steeped in tradition 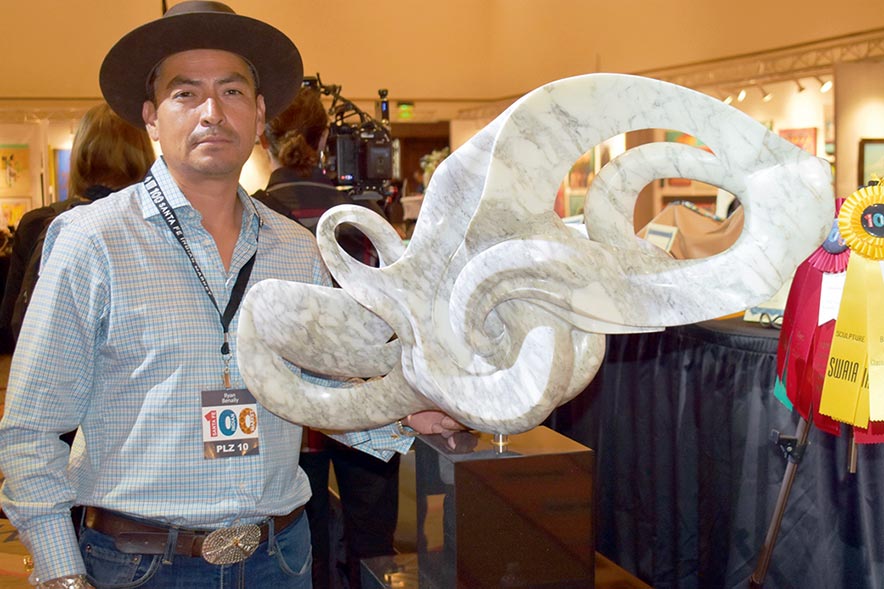 This year’s 100th SWAIA Santa Fe Indian Market brought over 1,000 art entries into the annual art competition, which were juried by about 40 judges at the Santa Fe Convention Center last Thursday.

“The work was phenomenal,” said Indian Market Operations Director Jamie Schulze. “There was truly an amazing amount of talent in the room.”

At Friday’s Indian Market awards ceremony, abuzz with hundreds of art aficionados, this year’s overall best of show award and a $30,000 prize went to San Ildefonso Pueblo potter Russell Sanchez for his polychrome pot titled, “One Hundred Years in the Making!”

“My idea for the pot was to take all of the styles, techniques and design elements that San Ildefonso potters were using during the time of the first Indian Market,” Sanchez said. “I took those ideas and brought them into the now.”

Sanchez, who uses only traditional materials and techniques, has been making pottery for close to 40 years starting at age 12 under the tutelage of famed San Ildefonso potter Rose Gonzales.

“My aunt Rose would teach me,” he said. “I would put pots in front of my house to sell.”

He also fondly recalls going to Indian Market with his mother and Aunt Rose.

“I remember going to her booth when I was young, sitting there, helping her sell pots,” said Sanchez.

Another famous potter, Anita Day, owner of the renowned Popovi Da Studio of Indian Art, taught Sanchez how to do gemstone inlay.

Sanchez said Day told him to “never, ever skimp” on stones or materials.

“She said always use the best quality and the best grade,” said Sanchez.

His best-of-show pot is inlaid with hematite stones and sleeping beauty and lone mountain turquoise.

Sanchez said the water serpent design on the pot signifies cleansing and the bear on top is a healer and protector for all people to keep them safe and healthy.

In fact, Sanchez said, in his culture the pots themselves are treated like people.

“In our language, every time you discuss pots, that’s how you describe it,” he said.

He said even the blemishes that emerge naturally on pots are valued as marks of distinction.

“You treat it the same way, you give it the same respect and courtesy, because, just like us, we’re not perfect as humans and neither are pots,” he said. “They’re your kids, treat them right and respect them.”

Speaking of children, Sanchez said he would like to see more young people get involved with the process of learning traditional art forms.

Sanchez said there are many things you just can’t learn in art school.

“You have to learn from your communities, your Pueblos, your tribes,” he said. “Take the time to listen to the history and one of these days it comes into play with the work that you’re trying to do.”

‘Best of the best’ 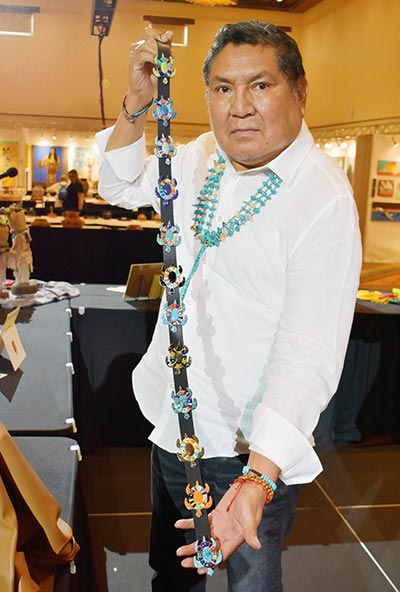 In addition to Sanchez, eight veteran fine artists earned best of class with prizes of $2,500, according to SWAIA.

The piece, which he calls “wearable art,” has 12 colorful jeweled turtles that took him six months to make.

“It’s got over 30 different stones from all over the world inlaid into the belt,” he said.

After participating in Indian Market for 20 years, Benally said it’s a great feeling to win best of class, especially on the occasion of the 100th anniversary.

“Santa Fe Indian Market draws the best of the best in every category,” he said.

Benally got his start working for a Gallup jewelry manufacturing company when he was in high school.

“That’s where I learned all of the silversmithing, all of the lapidary work,” said Benally. “I loved working with the metal, the different stones. From there, it just took off.”

Then he purchased all of the equipment, tools and torches he needed to build his own pieces and started his own line of jewelry.

He said the first art market he participated in was the Gallup Inter-Tribal Ceremonial in the 1980s and then he branched out to Indian Market.

“You have the collectors who always come by and look at your best pieces and you make friends with them,” he said. “They always end up buying your one-of-a-kind piece.”

Award-winning Hopi weaver, painter and farmer Ahkima Honyumptewa (Bacavi) won best of class for textiles for a white Pueblo-style dress with wool woven in diamond and diagonal twill with hills and valleys.

“It was a big surprise,” said Honyumptewa. “I wasn’t expecting that. It feels good that everybody knows what I do now.”

He said his best of class weaving was immediately purchased by a museum in Minnesota.

He said he’s honored to be acknowledged for carrying on his Hopi traditions while incorporating contemporary elements into his work.

“It’s humbling after all these years to finally be recognized,” said Honyumptewa. “It took me 10-plus years to get to where I am now. Now I’m stepping into the next level.”

Ryan Benally, who won for his hand-carved Italian marble and granite sculpture, “Bold as Love,” said he was grateful for his traditional upbringing in Cove, Arizona, where he spoke Navajo with his elders and lived without electricity or water.

His first exposure to sculpture was as a teenager when he became an apprentice to renowned Navajo sculptor Tim Washburn.

“He set me on the right path of creating sculpture as an art, not as a hobby or a craft,” said Benally. “I saw what he was able to do and it was something I’d never seen before except in books.”

Then Benally dedicated himself to working in art foundries for 17 years, creating sculptures in metal, bronze and stainless steel for other artists, including at the Shidoni Foundry near Santa Fe.

“I wanted to know how to do every process of different sculpture,” he said.

He then met renowned Pojoaque Pueblo sculptor George Rivera in 2010 and began collaborating with him in building Rivera’s work.

Seeing what Benally was capable of early on, Rivera commissioned Benally to do a life-size Yei’bi’chei figure.

“That’s when I created a seven-foot Yei’bi’chei in Italian marble, which is on display at Buffalo Thunder,” said Benally.

That sculpture premiered at the 2011 Pojoaque Pueblo Poeh Museum show.

To this day, in addition to creating his own pieces, Benally is Rivera’s right-hand man for production at Rivera’s studio at the pueblo.

Benally said that the remaining piece of marble from the large Yei’bi’chei sculpture is what he used to make his winning piece, “Bold for Love,” which carries on the spirit of healing.

“Love is always coming and going, but it’s always infinite and it’s in our hands and our hearts,” said Benally.

“That’s how I thought about the work,” he said. “Whether we’re with someone or not, we still have to love ourselves. We have the love within us.”

“It’s a teaching of the culture and the way of life,” said Chavarria. “All cultures have lifeways since time immemorial. Some might have forgotten them or lost them, but we still have them and we pass them down.”

Chavarria has been carving for almost 50 years. Already at age 10, he was influenced by professional artists, he said, including Otille Jackson, who taught him old-style techniques using all natural materials and pigments.

“She was the first woman carver in Hopi,” said Chavarria. “She raised her family on carving katsinas.”

Chavarria said winning the best of class award for carving with his unique and very traditional style was a great affirmation.

“I really appreciated it,” he said. “I knew what I had when I entered it because it’s totally unusual. I’ve been refining the technique over the years.”

“You can do it,” he said. “You just have to keep working and going for it.”

“I know there’s a lot of youth artists out there who entered like me,” said Patricio. “It’s kind of hard because only one artist wins the best of classification. I think it’s really special to win something at a young age.”

“He really inspired me to keep the family tradition going because his mother and his father taught him at the age of 9,” she said.

In turn, their father passed on the pottery teachings to her and her sister, she said.

Regardless of what she chooses to do after she graduates from high school, Patricio said she will always continue making pottery and plans to enter Indian Market as an adult next year.

“Nothing will stop me,” she said. “I’m always going to get better.”

Patricio advises other aspiring youth artists that even times of trial and error, which can be challenging, can help you grow and improve as an artist.

“I think it’s really important for all of the younger artists to keep going, no matter what, and not to stop loving the things they love to do,” she said.