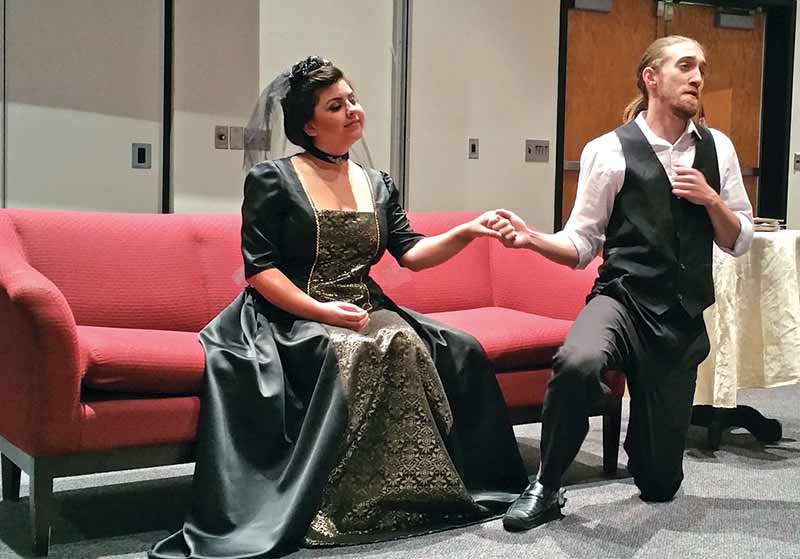 Yasmeen Lookman and David Hobbs perform during “The Bear” act of the Uniersity of New Mexico Opera production at UNM-Gallup this past Monday. (Times photo — Shondiin Silversmith)

Yasmeen Lookman and David Hobbs perform during “The Bear” act of the Uniersity of New Mexico Opera production at UNM-Gallup this past Monday. (Times photo — Shondiin Silversmith)

It’s not everyday one gets to visit the opera, but a few dozen people witnessed the University of New Mexico’s Opera Theatre students perform at UNM-Gallup Monday night.

Their two-hour performance featured over a dozen performers and several different acts in a production called “The Bear Essentials of Opera.”

Co-director Leslie Umphrey told the crowd that this was the first time the UNM opera ever performed outside of Albuquerque.
“It’s very, very exciting,” Umphrey told attendees.

The UNM opera performed in the Calvin Hall Auditorium and performers changed props and set up the stage in front of the audience.

The program featured five acts: “A Hand of Bridge,” “The Bear,” “Starbird,” “Elisha and the Bears” and “The Trial of Goldilocks.”

Ty Cox sings to the crowd as his character David in the “A Hand of Bridge” act of the opera. The character David sings about his fantasy of being as rich as his boss. (Times photo — Shondiin Silversmith)

“A Hand of Bridge” featured four performers set in the home of Bill and Sally for a weekly bridge game. The plot revolved around two married couples whose frustrations and desires are revealed in each of their ariettas.