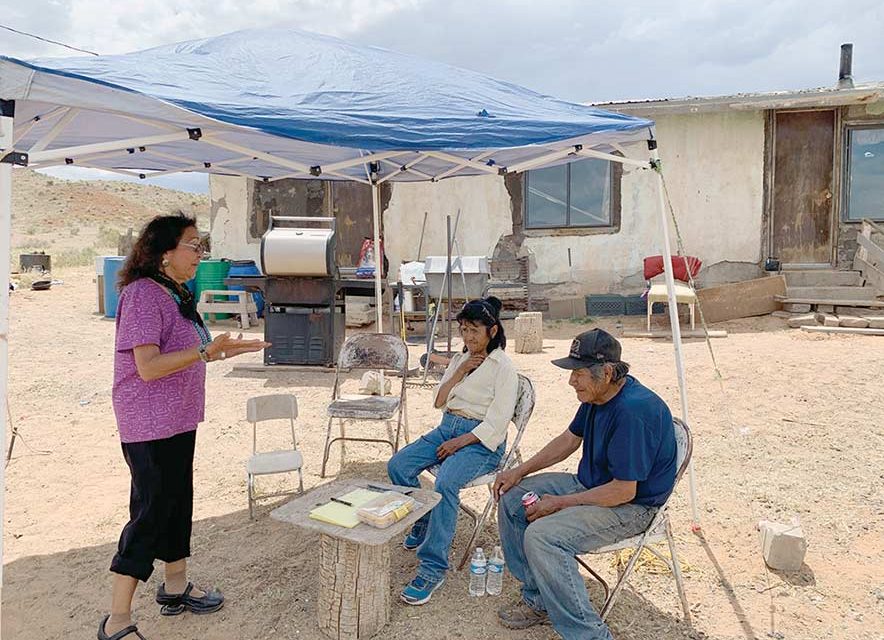 Less than a week after an article appeared in the Navajo Times detailing the plight of an elderly Indian Wells couple living in a ramshackle house with no way to get to the grocery store or chapter house other than walking, it was a much different scene.

A visit to Lester John and Evelyn Begay Tuesday found the smiling couple situated under a donated shade canopy as they manned a table with a sign-in sheet to keep track of all the help and donations that have been pouring in. The sheet logged two church groups, a representative of the Navajo Nation president’s office, and five or six individuals and families, many of them related to John.

The house and yard had been cleared of debris and old appliances, which were neatly stacked in front, waiting to be hauled away. The floors, worn to the floorboards except for patches of linoleum here and there, were swept and tidy. Someone had patched a large hole in the kitchen ceiling with a vinyl tarp. More importantly, the pantry was stocked to the gills (unfortunately, John revealed, the couple had to toss a lovely donation of fresh meat because they have no refrigeration and it spoiled).

And the two metal water barrels the couple already had had been joined by four others, all full, courtesy of Water Warriors United and other groups. Someone had set up a hand-washing station with a spouted five-gallon container, liquid soap, paper towels and bleach, and another volunteer had cut and styled Begay’s hair and decked her out in a crisp new cotton blouse, jeans and a pair of brand new sneakers, even some stylish sunglasses.

She smiled shyly as Laverne Joe, who had brought the couple to the attention of the Navajo Times last week, told her she looked pretty. The makeshift grill the couple had been cooking on had been replaced with two gas grills, although they still need propane cylinders.

Best of all, John’s grandniece had set up a GoFundMe page to buy the couple a prefab home. As of Wednesday morning, $3,323 had been raised of a $5,000 goal. While we were there, John’s niece, Frieda John of Winslow, and her daughter Yanabah Lester came by with a chicken dinner from Church’s and a carload of new houseware.

Frieda said Lester John’s relatives all live far away and weren’t aware until the article came out how much the house had deteriorated. Yanabah offered to advocate for John and Begay at NTUA, since the couple says they have been paying an electrical bill for three years even though the electricity was shut off and the meter removed.

She also said she would look into becoming certified as a caregiver so she could look after the couple.

“When we lived here, Grandpa Lester babysat for her while I was at work,” Frieda explained. “Now she wants to give back.”

As Joe translated all the happy developments into Navajo, John teared up. “Nizhoni,” he said softly. “I appreciate all this.”

“I want to hug everybody, but we’re not doing that any more so I’ll just dance!” declared Joe as she broke into a joyful gyration to the amusement of John and Begay.

Of course, the work to improve their lifestyle is just beginning, and Frieda says she hopes people will continue to check on the couple now that their immediate needs have been met.

Joe reminded that there are many more elders across the Navajo Nation who are living in similar conditions. “It’s great that all these people are stepping up for this grandma and grandpa,” she said, “but what needs to happen is for the tribe to figure out a way to find all the people who are living in these conditions and get some help to them, COVID or no COVID.”