‘I’m so stoked’: ‘Navy brat’ soccer star finds a home at nearby college 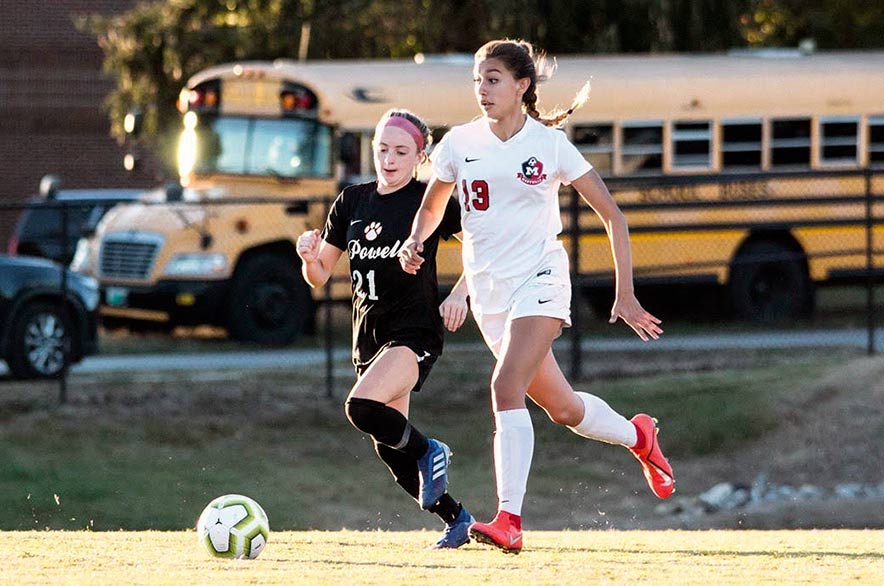 Diné athlete Arianna Whitehead (13) signed her letter of intent to play for the women’s soccer team at Tusculum University in Greeneville, Tennessee.

Arianna Whitehead lived the fast-paced life of a military brat.

Her parents, Mayford and Jessica Whitehead, put in 33 years between them in the U.S. Navy, with her dad serving 25 years before retiring recently.

With her family moving from place to place, Arianna found it hard to establish herself as a soccer player among her peers.

“I think that was the hardest part, with me changing schools,” said the Diné athlete, who has maternal lineage from Tuba City. “We moved quite often so it was hard to get my name out there.”

Arianna thought her family had found a permanent home in Kingsland, Georgia her freshman season. But after playing one season the family moved once again, this time to Maryville, Tennessee.

“I kind of knew that was the school I wanted to attend,” she said of the high school in Georgia. “But all of a sudden we took a shift and we moved out to Tennessee so I had to restart things. I had to get my name out there again to a school where the girls have never met me.”

At her new high school, Arianna was part of team that was nationally ranked for three consecutive years. This past season the Maryville Lady Pioneers reached the Final Four in their division with an overall record of 18-5-3 overall.

And while she played on a great high school team, Arianna got plenty of looks from college scouts while playing club ball.

Of the interest she got, Arianna narrowed her choices to five schools before settling on signing with Tusculum University in Greeneville, Tennessee, which is one-and-a-half-hour drive from the family’s current home in Maryville.

“I’m so excited,” Arianna said of inking her name to the Division II school. “I’m so stoked, words don’t describe how excited I am. It’s been a long and hard journey to get to this point in my life.

“I had a lot of hardships playing soccer,” she added. “There is a love/hate relationship with soccer but I think the most rewarding part is I finally made it. This is just a pat on the back for me, entering this next step in my life.”

With Arianna earning a scholarship, her mom, Jessica, said it’s going to help ease the burden of the family paying for her education.

“As a family we put a lot into her soccer so this has been like an investment,” the Whitehead matriarch said. “It’s going to help quite a bit. She chose a school that gave her a nice scholarship.

“I’m just really proud of her. I grew up on the rez and it’s always such a big accomplishment to see athletes go on to the next level,” Jessica said in between tears. “I’m so happy to see her succeed and have that opportunity to pursue her dreams, and basically to have her do it on her own. She worked so hard and it’s rewarding to see your child succeed.”

Since she was five years old, Jessica said, her daughter developed a passion for playing soccer.

“(Arianna has) been very headstrong and very driven to what she does,” Jessica said. “And when it comes to soccer, she’s self-motivated. She puts in the work and over the years I’ve been there for the ride, just cheering her on.”

Besides soccer, Arianna also dabbled with basketball when she was younger but “as I got older I realized I should stick with one.”

Playing soccer, however, had to take a backseat when the family moved to Japan for three years.

“I did track and field while I was there and I really didn’t start club ball until we moved to Hawaii,” she said.

Before living in Japan and Hawaii, Jessica said she brought her two daughters (Arianna and Nevaeh) home to Tuba City to live with their maternal grandparents.

“We’ve always been on the move as a family and when my husband was deployed we came back home to the rez to live with my parents,” Jessica said. “They got to hang out and they got to know their grandparents for the four months we lived there.”

While there, Jessica said her daughter developed a love for running and ran for her elementary school team.

“She really loved it and she would run the sand dunes,” she said. “That was her favorite thing to do.”

That love for running evolved onto the soccer pitch as Arianna plays midfielder for her soccer teams.

“Midfielders do a lot of running and we have an important role on the team,” she said. “We really set the tone in the game. We have to control the field. We create the scoring opportunities and we also have to play defense sometimes.”

With a lot of conditioning involved, Arianna said, “you have to be super fit” to play midfielder.

“You can’t hold anything back,” she said. “You have to take advantage of every opportunity you have, and it requires a lot of running.”

For a good part of the year, Arianna said she trains six days a week and during club season it gets really intense.

“Our summer workouts are brutal,” she said. “We don’t touch the ball too often. A lot of times it’s just getting fit.

“Outside of what we are doing I like to go above and do more than that,” she added. “I would lift and make sure I’m eating right and hydrating. What I do is beyond whatever they put on a piece of paper.”