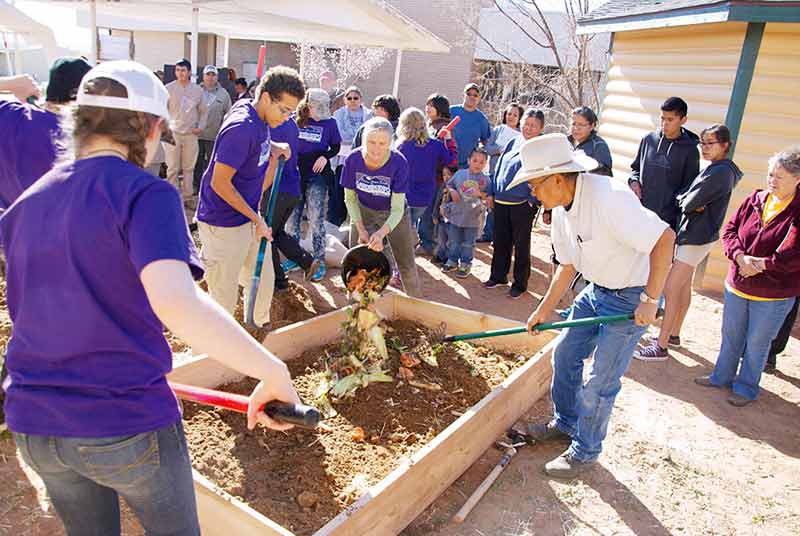 The garden expo on March 12 was an oasis for people ready to venture out and to dig their hands in the dirt. Tuba City Regional Health Care Corp.’ s Health Promotion Diabetes Prevention Center celebrated this year the latest trends in gardening, landscaping and edibles, and attracted hundreds of people across Northwestern Navajo.

Garden enthusiasts on Saturday morning participated in a 3.1-mile run and walk near the TCRHCC campus, where the annual expo took place.

Expo-goers joined other gardening enthusiasts subsequently to share ideas, gain inspiration, and to create something new.

This year’s event featured a handful of new demonstrations in lawn and garden tools. Also new this year was an expanded focus on food, from the bounties of home gardens to raised-bed gardening.

Kim Howell-Costion, who has been recognized for establishing the Community Supported Agriculture Project, was on site in the healing garden where she demonstrated how to make a double-dug lasagna – a form of gardening in which the soil is formed in three-to-four-foot-wide beds of any length or shape.

“A raised-bed works really great in places where it’s hard to grow,” explained Tyrone Thompson of North Leupp Family Farms. “In those areas, raised-beds are an absolutely great tool to grow food and to keep it local.