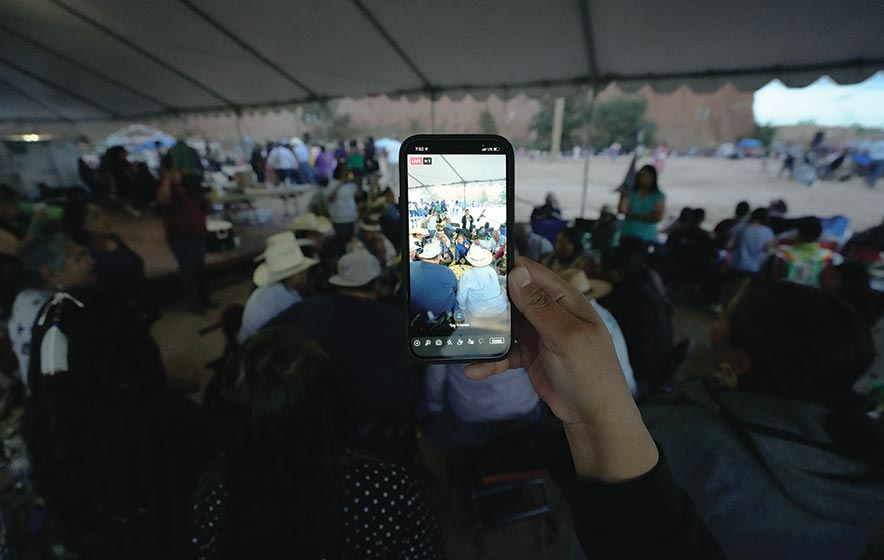 The Gallup Inter-Tribal Ceremonial Powwow held its first grand entry since 2019 at the Red Rock Park on Aug. 12.

The COVID-19 pandemic caused the event to be canceled and to go virtual in 2020 and 2021, and no powwow was held due to guidelines and regulations.

Red Rock Park was filled with many attendees and vendors on Friday, which was also a free day sponsored by the Fire Rock Casino.

Grand entry for the powwow began at 7:30 p.m. when all the dancers lined up at the eastern portion of the powwow grounds.

The excitement was evident as the speakers emphasized repeatedly how it was the first Ceremonial powwow in three years and how grateful they were to be back finally.

Edd Scott, who danced in the golden age category at Friday’s powwow, has been dancing at Ceremonial for more than 30 years. He said it was a relief to be back on the powwow grounds.

“It’s a relief, a relief,” Scott said. “It’s good to see all my powwow friends, new and old, but it’s good to hear the drums most of all.”

It’s a healing process to be back, he said.

“It’s a healing process for us because of the pandemic,” he said. “All that time, we just had to wait, wait, wait, until it was time, and sure enough, it did open to us right now.”

Scott was not the only one to feel relief over returning to the Ceremonial powwow grounds.

Derrick Valencia, Pueblo of San Filipe, and a singer with the drum group Iron Star, said he was excited to be back at the powwow.

The group first sang at the powwow in 2016 and did not have the chance to return to the powwow until this year.

Valencia wanted to return earlier, but because of the pandemic, he could not.

Valencia said that the drum group would return to the Ceremonial powwow in the future.

“This is our second year of coming back, and I’m really happy about coming back,” he said. “It makes my heart full with joy coming back and seeing all of my fellow relatives, fellow drum groups here all around.

“I’m happy to see all the dancers dancing,” he said.