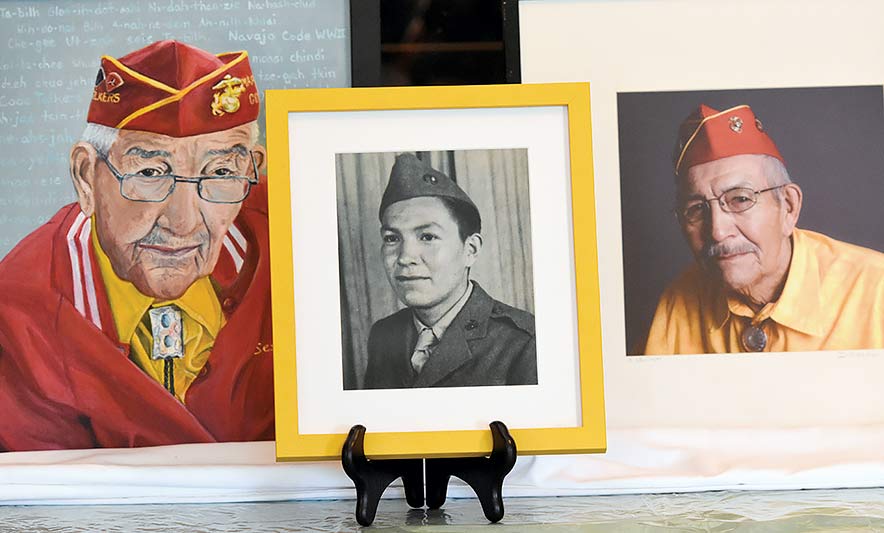 Navajo Times | Donovan Quintero
A portrait of a young Navajo Code Talker Alfred K. Newman Sr. is set next to a current photo of him on Jan. 19 during his funeral service in Farmington. Newman died on Jan. 13 in Bloomfield, N.M.

In 2019, the Navajo Nation mourned the passing of four Navajo Code Talkers, leaving only five left of the heroic dynasty.

The late New Mexico state Sen. John Pinto, who was a Navajo Code Talker, was considered the longest-serving member of the senate, having been first elected into office in 1977 and served until he passed on May 24, 2019.

Just before he passed on he was bestowed an honorary doctorate from Navajo Technical University.

“As a senator and a code talker he has always pushed Navajo Technical University for funding,” said NTU President Elmer Guy during NTU’s May commencement. “We are honoring that past that has made the university what it is today. In that context, we are honoring Senator Pinto with an honorary doctorate.”

As a unit, the Navajo Code Talkers are revered worldwide. Having fought in World War II and helped to win the war by using their Navajo language as an unbreakable code, they are seen as superheroes.

But for each Navajo Code Talker their accomplishments in life didn’t end after the war was over. For most it was just the beginning of a long career. 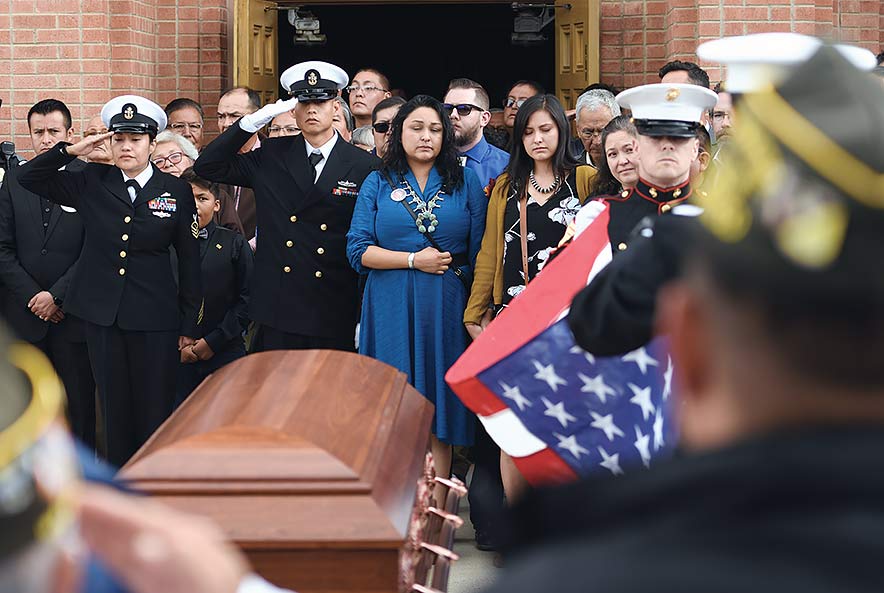 Navajo Times | Donovan Quintero
The family of the late state Sen. John Pinto attends his funeral on May 30 at the Sacred Heart Cathedral in Gallup.

The late Fleming Begay fought in WWII, but afterwards he was a school guidance counselor, businessman, and even gave fiduciary assistance to the establishment of Navajo Community College.

At the beginning of the year, Navajo Code Talker Alfred K. Newman passed away. While in the Marines he was in the 1st Battalion, 21st Marine Regiment, and 3rd Division from 1943 to 1945. He was honorably discharged and received the Congressional Medal of Honor.

This year also saw the passing of former instructor of English and advanced reading at Diné College LaFrenda Frank, who also was an editor at Salina Bookshelf in Flagstaff.

She worked with Evangeline Parsons-Yazzie on her novels of the Long Walk beginning with “Her Land, Her Love”; with Rex Lee Jim to revise a bilingual work of poetry “Saad Lá Tah Hózhóón”; and with Cindy Yurth of the  Navajo Times on the two-volume set “Exploring the Navajo Nation Chapter by Chapter”.

She also worked with children’s authors including Daniel Vandever, author of “Fall in Line, Holden,” and Anita Poleahla, author of “Celebrate My Hopi Corn.”

In October, renowned Navajo artist James King, originally from Shiprock, passed away. You can see his paintings not only in the lobby of the Phil Thomas Performing Arts Center in Shiprock, but also the Heard Museum, the Museum of the American Indian, the Denver Airport, and many top-notch galleries and private collections all over the world.

Navajo Police Sgt. Lamar Martin had been with the Navajo Nation Police for 22 years when he passed away in November. Considered a natural leader, his superiors said he was bound to rise higher in the ranks before his untimely death.

Originally from Crownpoint, Martin was a Marine veteran and a member of the New Mexico National Guard.

Another notable passing of 2019 was that of the Navajo Generating Station. Whether you were against the power plant or for it, its passing leaves an impactful blow to hundreds of Navajo workers who depended on the jobs NGS had supplied.

Also impacted are the Navajo Nation’s and Hopi Tribe’s budgets. Navajo had relied heavily on the $40 million or so that NGS had brought in for the Nation each year.