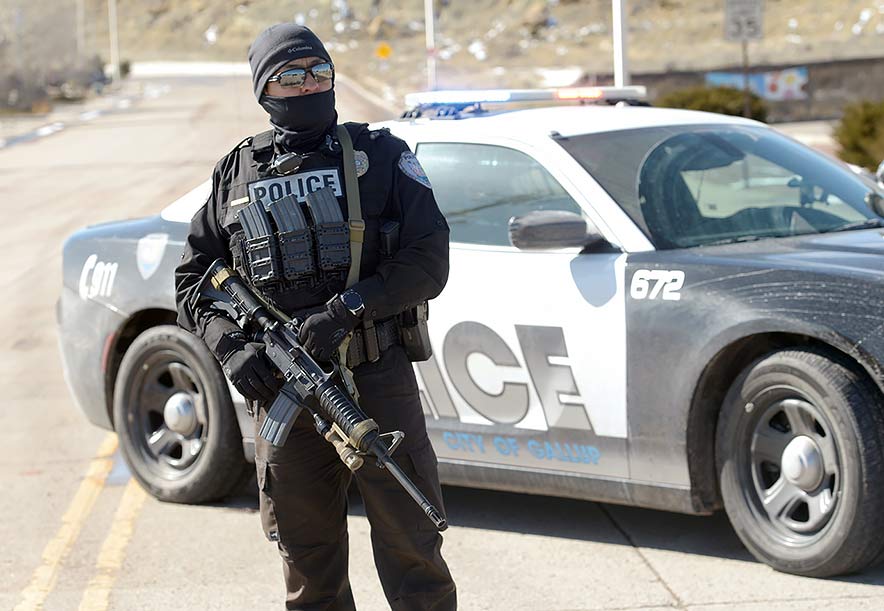 Navajo Times | Donovan Quintero
A heavily armed Gallup police officer guards the intersection of Jefferson Avenue and U.S. Highway 491 in Gallup on Feb. 11 during a manhunt for a possible shooting suspect. Police later determined the shooting was by kids firing at targets.

Every year, we print hundreds of stories of people doing wonderful things in their communities or winning high-level honors. And every year, you pretty much ignore them.

When it comes to what you want, no matter how much you protest on Facebook that we never run enough “good” news, the statistics do not lie. You click on the stories of murder, rape, and mayhem, missing children, and scandal.

It’s not your fault. Our brains are hard-wired to perk up at bad news, many studies have shown.

“Our capacity to weigh negative input so heavily evolved for a good reason—to keep us out of harm’s way,” wrote Hara Estroff Marano in a 2003 article in Psychology Today.

“From the dawn of human history our very survival depended on our skill at dodging danger. The brain developed systems that would make it unavoidable for us not to notice danger and thus, hopefully, respond to it.”

And that’s why every journalism student learns in her first introductory class, “If it bleeds it leads.” Because — yes — we are here to sell newspapers. That is not our entire function, but we wouldn’t be here to bring you the good news if we didn’t at least break even.

He didn’t get his job back, but people seemed to gravitate to this story about courageous minimum-wage laborers risking their jobs to stand against injustice.

This story didn’t bleed, but it led, at least as far as you’re concerned. So maybe there is more to the human psyche than raw animal survival instinct.

Here is a list of 2019’s most clicked-on stories from our web site: