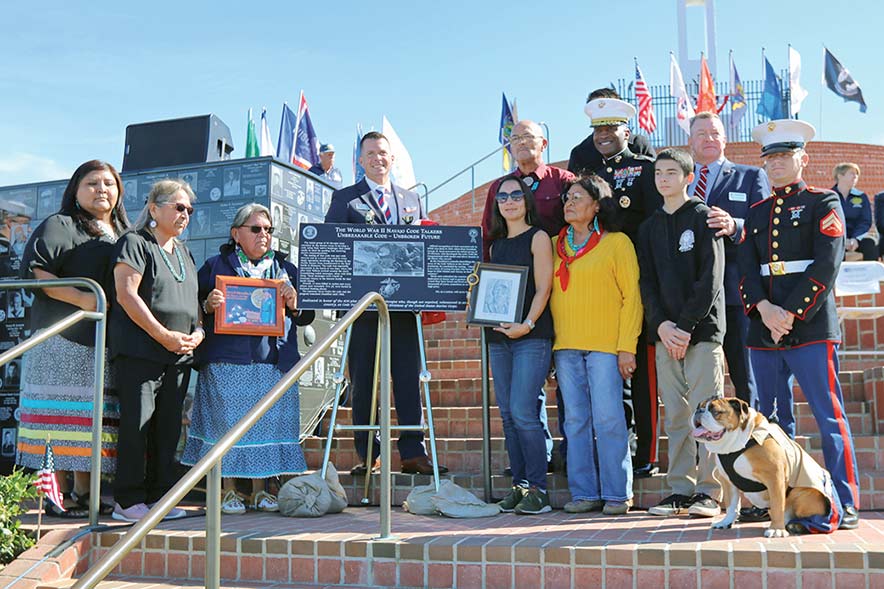 On Saturday morning, Nov. 5, 2022, the Mt. Soledad National Veterans Memorial in San Diego, California, conducted a dedication ceremony to add a Navajo Code Talkers plaque to its wall. Over 150 people were in attendance which was also livestreamed across the country. 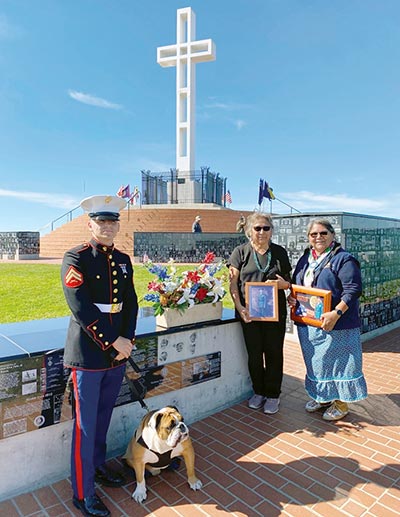 Mt. Soledad is located 822 feet up a hillside with a gorgeous view all around the San Diego Bay, a panoramic view in four directions. This park was founded in April 1952, and at the highest point stands a 29-foot concrete white cross with a footing base of 14 feet. The memorial holds over 5,500 plaques of men and women who have served in the armed forces, past and present.

The family of the late Sgt. Johnny R. Manuelito Sr., one of the original 29 WWII Navajo Code Talkers, also arrived, including daughters Leanna Manuelito-Mojado, Dolly Manuelito and granddaughter Tara Frank attended. Each daughter held a framed photograph of their father.

They traveled from Bishop, California, from the Paiute Tribe, where they were born and raised. He helped develop the code and was one of the instructors to teach the code to the new Navajo Marines who arrived for training.

Both Dolly and Leanna primarily grew up in Bishop, but they remember visiting their father’s family in Sheep Springs, New Mexico, when they were younger. They still visit the paternal side of the family in the Navajo Nation.

Manuelito had seven children, 18 grandchildren, and 27 great-grandchildren. On April 1, 1968, Manuelito died. His family didn’t know what a vital role he played as a Navajo Code Talker until 2001 when they were presented with the Congressional Gold Medal for their father’s service.

Mt. Soledad Memorial Association wanted to honor the Navajo Code Talkers in November for Native American Heritage Month. Since they are a part of the local San Diego history, the original 29 Navajo Code Talkers were sent for training to the Marine Corps Recruit Depot San Diego, then onto Camp Elliot, where they developed the code.

“The Navajo Code Talkers that we honor today were the original Americans that fought for their nation at a time when they were still not deemed citizens of the United States, nor even allowed the freedom to vote,” said retired Maj. Phil Kendro, who served more than 20 years in the U.S. Marines as a pilot and instructor. Kendro is the president and CEO of Mt. Soledad Memorial Association.

“However, due to their strong work, persistence, and dedicated warrior ethos, those stories will not be forgotten,” he said. 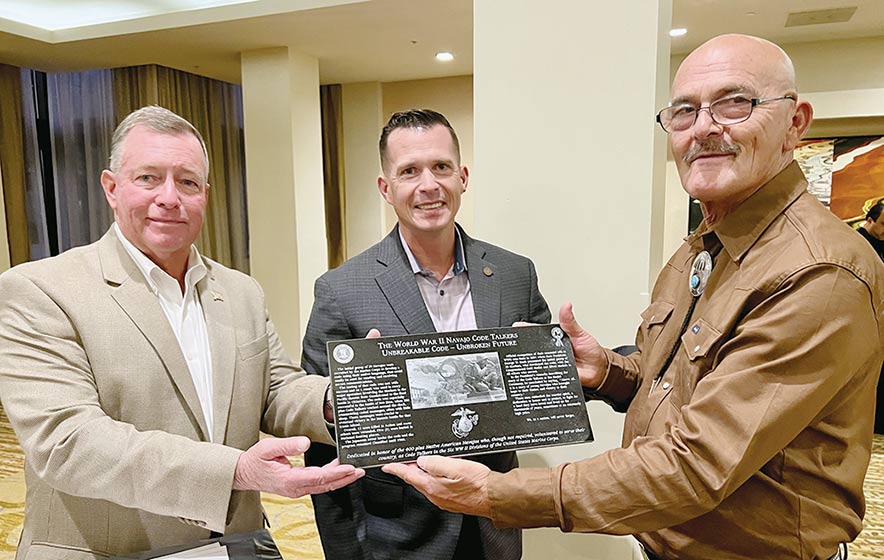 At the end of August 1942, when the young Navajo Marines were shipped off, they joined the battle in the Pacific Theater, where they used their sacred language in World War II to defeat Japan.

“Today, we enshrine 400 of our warriors who stood in defense of the homeland. That is why these Navajo teenagers went to war; it was their homeland,” Hawthorne added. “In 1942, there was no Navajo Nation flag, but in 1942, there was a threat to this flag (U.S.). It was these soldiers that now stand under this flag, that defended that and raised it higher, so all the world can see that we are America.”

Keynote speaker Brig. Gen. James A. Ryans, Assistant Commanding General, 1st Marine Division, explained how the military began using Native Americans who were fluent in their language to help communicate starting in World War I. But it was the Marines who fully embraced the idea.

Marine Staff Sgt. Philip Johnston came up with the idea to use the Navajo language and recruit Navajo teenagers to help with communication that the enemy did not understand since (Navajo) was not a written language.

“This first platoon of Navajo men successfully completed boot camp as the highest performing platoon out of all the platoons within the company at the time,” Ryans said. “Following their graduation from recruit training, the new Navajo Marines were sent to communication school, where they learned the fundamentals of operating military radio.

“Then, after graduating from communication school, they were transported back to San Diego and informed of their top-secret mission,” he said.

The Navajo Marines were flawless in the test of combat using the double code. The Navajo code was a success, and the enemy could not break it, added Ryans.

A special appearance by the Marines bulldog mascot named “Manny,” who is named after Manuelito, who helped develop the Navajo code. He then became an instructor to teach other code talkers. After the ceremony Nov. 5, Manny the bulldog posed for photographs with the Manuelito family.