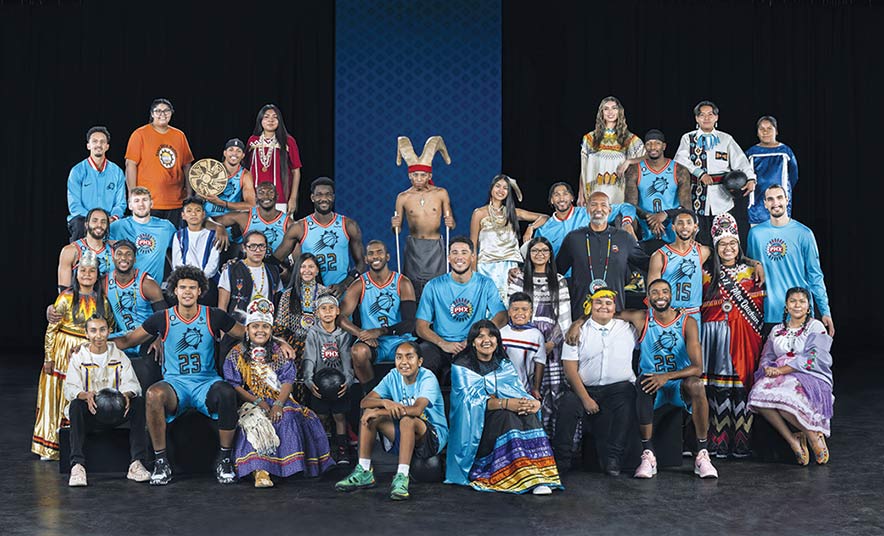 Courtesy photo | Jenelle Scott
The NBA Phoenix Suns poses with some tribal youths in unveiling the new City Edition jersey, which pays tribute to the rich histories and cultures of the state’s tribal nations.

When Shawn Martinez joined the Phoenix Suns family as the senior director of live presentation about two years ago, he committed himself to push the Suns’ City Edition jersey project past the finish line. 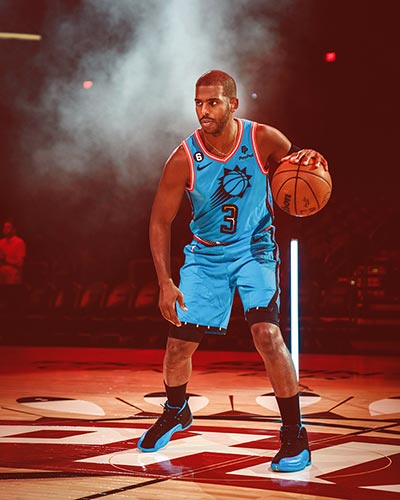 Martinez has done just that as the Phoenix Suns unveiled its 2022-23 City Edition jersey on Nov. 10, 2022, before the Suns players, leadership, tribal leaders, and youth representatives.

“There are a lot of dreams coming true in all directions with this jersey,” Martinez said, adding that this was a project that had been in the works for over two years. “This project, the process, and everyone who has put in hard work to make this happen – it has been a labor of love.”

The Sun’s City Edition uniform pays tribute to the rich histories and cultures of the state’s tribal nations and celebrates the shared love of basketball, according to Martinez.

The jersey has sparked Native pride throughout Arizona as the jersey celebrates all tribes in Arizona.

The jersey is turquoise and includes Native-inspired designs and details that were thoughtfully and carefully selected.

The jersey features a new logo inspired by the Native American medicine wheel, depicted on the shorts’ waistband, representing the four cycles of life and the four cardinal directions. There are also 22 feathers in the medicine wheel logo and 22 arrowheads lining the bottom of the shorts. The arrowheads represent each of Arizona’s tribes.

One of the most significant and unique features of the jersey is the black tape running down the side of the jersey top and shorts, which depicts the word for ‘sun’ in each of the tribes’ respective Native languages.

“The words in all the different languages hits home for a lot of people,” Martinez said. “People have said, ‘That is me; that is a part of me.’ We had to reach out to all the tribes to get their word for ‘sun,’ which is probably the most important piece for all of us because each word is unique to each tribe.

“We are most excited about that because it was hard to reach out to every tribe during the pandemic because a lot of offices were closed,” he said. “We just kept going, and we made it happen. We just wanted to ensure that all 22 tribes and their stories were represented.”

Spearheaded by the Suns

The project took much collaboration and coordination from many.

The idea, research, and design process for the uniforms were spearheaded by the Suns’ in-house marketing and creative teams with consultation from Navajo designer Lacey Trujillo from N7, a program at Nike that is committed to supporting Native American athletes and Indigenous youth.

Martinez and the Suns also worked directly with the Inter-Tribal Council of Arizona, comprised of the leadership of 21 of the 22 tribal nations of Arizona, and the Navajo Nation, to ensure the leaders of each sovereign nation were included in the development process. The Suns also collaborated with local organizations and groups, including the Heard Museum, Phoenix Indian Center, Cahokia SocialTech, and ArtSpace, an indigenous-led platform for creative place-keeping in downtown Phoenix, for educational and creative support.

Born and raised in the Navajo Nation, Martinez dreamed of making it to the NBA.

“My ultimate dream was to play in the NBA, but I found my way to the NBA in a different way,” said Martinez, an alumnus of Window Rock High. “I am here to let the younger generation know that it’s possible, that they can do it, and they can’t let those distractions or roadblocks stop them from finding a way to their dreams.”

The unveiling event brought together youth and leaders from tribal communities across Arizona.

“We reached out to all 22 tribal nations to get a youth representative to take a picture with the team,” he said. “I could feel the excitement, the energy, and the hope that they we’re going to meet their heroes. It just means so much to me that I’m in this position to help amplify the voice of all 22 tribal nations.”

Each Suns player received a jersey, a beaded medallion from a Navajo artist, and new uniforms.

“All the players were excited to get their Native bling,” Martinez said of the Suns players upon hearing the significance of the uniforms. “They were so excited. Ayton ran out onto the floor and told the rest of the team, ‘You know what this means, guys? It means we gotta play hard when we wear these jerseys!’ When they put on the jerseys, they will feel the pride of 22 nations of Arizona.”

In addition to the jerseys, a matching hardwood design debuted at the Nov. 16 game against the Golden State Warriors. The hardwood design features the medicine wheel at the center court and the 22 translations for the sun along the perimeter. The color configuration of the medicine wheel at the center court is rotated to ensure that the white and black colors face north while in its fixed position in the arena.

The Suns will wear the uniform throughout the 2022-23 season, starting with last night’s home game against the Golden State Warriors, which also featured a halftime tribute to the tribal nations.

The team will wear the uniform 10 times at home as part of “ORIGINATIV,” a season-long celebration series hosted by Gila River Resorts and Casinos honoring the 22 tribal nations of Arizona.

The Suns will also wear the uniform on the road for seven games, primarily focusing on cities with large Indigenous populations.