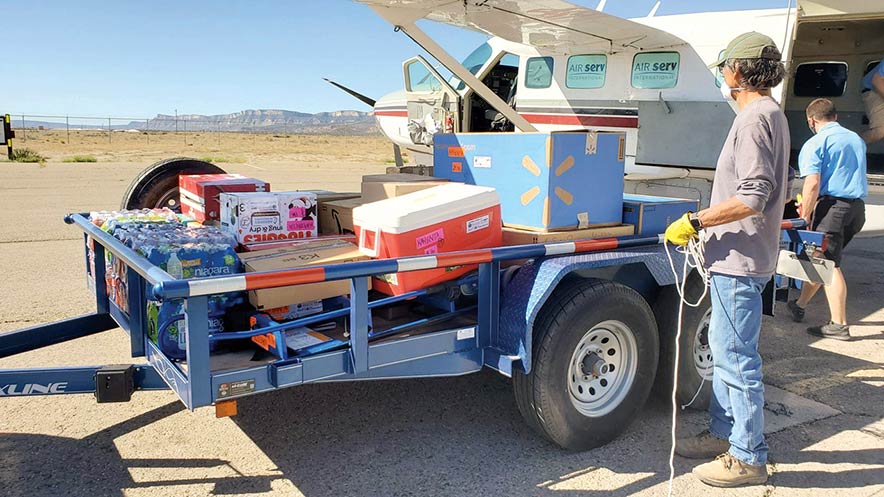 The grassroots Navajo & Hopi Families COVID-19 Relief Fund, which has raised over $5.6 million since March, has now partnered with Air Serv International to bring aid to Navajo rural communities by air.

“I’ve never been a part of something like this,” said Cassandra Begay, NHFRF communications director. “I never would have thought that I would be coordinating a humanitarian air program for my Nation. It kind of feels like, yeah, I’m fighting COVID with airplanes!”

Air Serv, a nonprofit charity, is a humanitarian organization dedicated to the movement of cargo and personnel by air. Air Serv operates overseas in conflict areas or places without infrastructure, where it’s unsafe or not possible to transport cargo by ground.

“The primary mission of this program is to reach isolated and remote communities and people who would not otherwise have access to supplies,” said Air Serv Communications Director Danielle Payant, who has been coordinating the operation from the Westwind Air flight school at Deer Valley Airport in Phoenix.

Air Serv collaborates with groups like Doctors Without Borders and the United Nations Humanitarian Air Service, and obtained a grant of over $70,000 dollars from the International Society of Transport Aircraft Trading to fund the NHFRF Navajo Air Bridge Program.

This is their first-ever domestic deployment. Begay said getting as many resources to as many communities as possible is a big part of the relief fund’s mission.

“That’s all we do all day long is try to think of innovative ways to get as many resources out as quickly as possible,” she said. “This is our way of augmenting our distributions.”

Additionally, Air Serv has supplemented the ISTAT grant with over $20,000 toward procuring donations, and they have been receiving supplemental donations from small and large donors from across the United States.

“We’ve received an incredibly generous amount of donations from the public,” said Payant, who unpacks and inventories each shipment. “The response has been like nothing I’ve ever seen before. We’re literally getting deliveries every day at all hours of the day from people sending supplies.”

While the Air Serv-Navajo Air Bridge collaboration that began July 6 was set up to make three flight deliveries per week for six weeks, Payant says she already sees the need in communities is greater than anticipated.

“It’s been an extremely eye-opening experience,” she said. “We’ve moved over 11,000 pounds of donations in the last two weeks. I’ve told my team that if we have the resources to run six flights a week, we could. There would definitely be a need for it.”

Payant says they are trying to hit every area on Navajo that has a distribution team ready on the ground. The planes are flying caravans, which are very sturdy aircraft built for the purpose of landing in difficult terrain.

“They can land wherever there is a landing strip and there’s a ground crew ready to take delivery,” she said. Payant says she is very impressed with the NHFRF team leaders and dedication of all of the volunteers. “Nothing like this would ever be able to take place if it weren’t for the volunteers,” said Payant. “I have incredible respect for them.”

To date, the Relief Fund has served over 18,000 households and 72,000 individuals, said Begay. The air deliveries include essentials such as water, cleaning supplies, sanitizers, portable hand washing stations, masks, face shields, diapers, and dog food. “We are also purchasing refrigerators for distribution sites and we’ll be flying those out to remote communities,” she said.

Additionally, they supply tents and cots tor COVID-19 positive relatives. “We want them to have a space to be able to isolate away from their families,” said Begay.

So far, they have made flight deliveries to Chinle, Kayenta and Shiprock and this week they will be delivering to Monument Valley, Montezuma Creek, Page and First Mesa. Begay said it’s amazing how residents have stepped up to coordinate volunteers and receive the supplies, and disseminate them into rural communities.

“They’re ready and good to go,” she said. “They pull up right onto the airstrip with flatbeds and trailers when the plane has landed.” Begay is particularly moved by the youth who have gotten involved. “They say, ‘I’m young, I’m talented, I want to help my community and my elders,’” said Begay. She sees an overwhelming amount of strength and kindness in them. “That’s the beauty and power in this,” she said. “What’s driving our relief fund is that empowerment.”

In the midst of all of the crazy politics, bureaucracy and systemic issues around the world, Begay says the teamwork that has emerged is a great example of what the rest of the country can do. “I wake up every day and I’m, like, ‘There’s people out there that need us,’” she said. “That’s what drives me.”

Payant says she never would have learned about the living conditions on Navajo and Hopi had she not been involved with this project. “I had no idea what people endure, especially on a reservation,” she said. “I had no idea of the limited resources. It’s heartbreaking that this is happening within the borders of the United States of America.”

Payant said from her perspective most Americans are not taught the living history or what the conditions are like now for tribes.

“I really feel that Indigenous people are forgotten in America,” said Payant. “We’re in the middle of a major cultural revolution right now and I would really like to see Indigenous people included in that movement.”

Payant said as awful as the pandemic is, it has shone a light on injustices that might not have come to people’s attention otherwise. “In that sense, there might be good things that come from this,” she said. “For example, the Relief Fund is phenomenal.

The amount of money that they’ve raised, the amount of publicity that they’ve earned — it’s gotten world-wide coverage! That is unheard of for a grass roots movement, especially in this short of a timeline. They’ve really brought attention to this need and I think the results are invaluable.”

Begay says partnerships like the one with Air Serv exemplify the spirit of K’e in recognizing the interconnectedness of all beings. “What we’re doing when we work together in this way not only with our own community members, but with other relatives who are non-indigenous, is recognizing the sacredness in all humans,” said Begay.

“We can all help each other by honoring that sacredness in each other.”

Begay said a similar synergy occurred when the people of Ireland stepped up to support the Relief Fund. “That was really beautiful,” she said. “A lot of our work is very much about collaboration and partnership with people around the world.” Begay said the goal is to keep building relationships and community so people can make a difference in a way that is mutually beneficial. “We want to highlight our volunteers and appreciate them where they know that the things that they do with their time and energy and money matters,” she said. “What you’re doing is bringing healing, resources and protection to communities that need it most.”

Payant said if they can get more funding to continue the airlift operation it could be a possibility. Payant said once Air Serv completes the six-week operation, one of its carriers, Westwind Air Service, could continue flights if there is funding.

Now that the NHFRF knows how the operation works it could continue even if Airserv departs, she said. Begay suggested the Navajo Nation government could also step in to help the people with transporting essential supplies to communities by air. Regardless of mode of transportation, said Begay, NHFRF is prepared to continue providing relief support to Diné and Hopi through the end of the year. “We know that fall and winter are coming and we know that people are going to need help,” she said.