They waved and blew kisses through the window, and that was all the thanks Veronica Lane and her group needed to stay motivated. 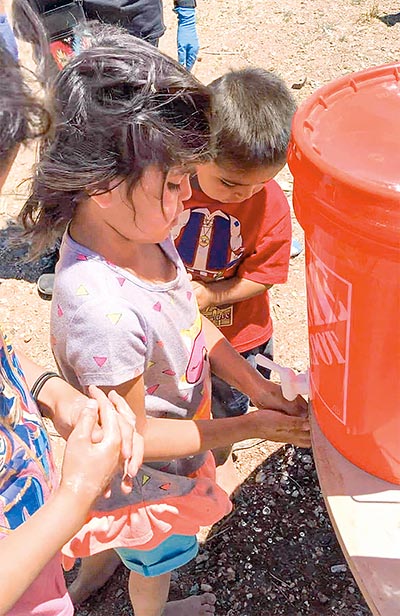 “We made sure that we were keeping our distance,” said Albuquerque resident Veronica Lane, a Diné originally from Coppermine, Arizona, as she showed photos of the people she and her team had visited earlier this month.

“We want to get the awareness out there so we can work with chapters, help identify the folks (who) really need these and get an idea of how many more kits are needed in (Western Navajo),” she said. “That would be really fantastic.”

Lane – along with her husband Nathan Lee, aunt Cindy Begay and uncle, Delegate Paul Begay, and a handful of others – has joined the fight against the coronavirus and is bringing help to those without running water.

The group has worked day and night since May assembling and distributing portable hand-washing kits to remote homes that do not have running water.

The project, Lane says, started with a simple Facebook post by Cindy, who posted a May 27 photo of two portable hand-washing kits she had made out of empty liquid detergent containers. She had gotten the idea from Pinterest, a sharing and social media service.

Cindy said she gave the two assemblies, which included a role of paper towel, antibacterial hand soap, and a discard bucket, later that day to two elders who showed up at the Coppermine food distribution.

Her post received 110 likes and 32 comments, one from Lane asking if more families needed them. Lane said she’d ask members of her church ward for donations.

“When this COVID-19 came up, we kept hearing, ‘Wash your hands for 20 seconds,’” Cindy said. “I saw on (social media) a demonstration of a (portable hand-washing station). It had paper towels, it had soap.

“It brought me back to my childhood because during those days, I lived on the Navajo Nation,” Cindy said. “We just had a pan of water and that water sat there all day and all of us washed our hands in that over and over again. I decided we need to help our people out.”

Hand washing frequently for at least 20 seconds is an effective way to eliminate viral particles on hands. Lane said she’s heard that again and again from health authorities. But some health officials make the flawed assumption that everyone has running water to practice good hygiene, she said.

For the 2.2 billion people in the world who lack safe drinking water, that advice is difficult to follow, according to the World Health Organization.

DigDeep’s Navajo Water Project reports that about 30 percent of Diné don’t have a tap or toilet at home. That’s an estimated 16,000 households without running water, said Deenise Becenti, spokesperson for the Navajo Tribal Utility Authority.

“We grew up without running water as well,” Lane said. “So this really hit close to home. We were looking at the liquid laundry detergent, which you have to keep pushing the button (on the valve) to get the water to come out. We were a little worried about that and we wanted something that could hold more water.”

Lane and her husband started looking for more ideas online. Lee came up with replacing the liquid laundry detergent container with a 5-gallon bucket (and 3-gallon containers for those who can’t lift a 5-gallon bucket) and attaching a spigot.

“My aunty worked with Boston’s Ace Hardware here in Page,” Lane said. “They donated buckets and lids. We met someone who works for Home Depot in Albuquerque. His name is Ron and he’s been really great to work with. Working with him, he’s donated 90 buckets from Home Depot.”

Lee started drilling holes for spigots once the plastic faucets arrived from Amazon. The lids also required a small hole for an air vent. The couple also collected more than 200 liquid antibacterial hand soaps from stores like Lowe’s.

“It took a long time to get all the materials because there are limits on hand soaps,” Lane said. “So we’ve been buying three at a time for the last (seven) weeks to get what we need.

“We received enough monetary donations from people across the country to build about 140 (portable hand-washing stations),” she said. “And then with other donations, we were able to get 250 (stations).

Lane said some of the materials, such as mop buckets and paper towel holders, came from dollar stores. The cost of one portable hand-washing station is about $12. The plastic spigots, however, are a bit pricey, ranging from $6.24 for a pack of two to about $11.99 for a pack of four. Each hand-washing kit also comes with instructions.

“It went really well,” Lane said. “We just wanted to see how this would go. And the response has been amazing. Me and my aunty were talking, and we received an overwhelming response. I think we’re going to go ahead and turn this into something more official.”

Lane, Cindy, and their team on July 7 and 8 delivered some of the first portable hand-washing kits across Western and around the Grand Canyon Navajo area, showing families that received them how to hand-wash properly.

Paul said the team also discussed with the families other ways to stay healthy, such as not touching the facial mucous membranes – the eyes, nose and mouth, all entry portals for the coronavirus and other viruses.

“We know that there’s a water shortage out there and people don’t have running water,” Paul said. “We needed something to really spark the effort of hand-washing. It was pretty easy to put together. Now, everybody wants to help. It’s been very popular, and a lot of people are asking about it now.”

Paul said a portable hand-washing station can be set up right outside a house. Sunlight will heat the water inside the 5- or 3-gallon bucket so it is warm like it should be.

“Basically, when you’re using it, (the water) is nice and warm,” Paul said. “… People are beginning to use it. This is kind of an interesting thing, so people are using this a lot.”

Paul said more materials are on order to make more portable hand-washing kits and the team is getting volunteers to help assemble them and to help deliver to rural homes across the Navajo Nation. Two kits have been delivered as far away as Názlíní, Arizona.

“We know that this is a short-term fix, hopefully long-term,” Lane said. “We want everyone to have running water … to have (indoor plumbing). For now, we think that this is a cost-effective way and they’re really mobile.

“We’ve even had folks reach out to us saying this would be really great because, ‘We can take it from our home to the sheep camp. And we don’t have to put something huge in our truck,’” she said.

“We like their portability, we like that they’re really cost-effective,” she said. “So I’m really hoping that the awareness and the exposure of the need will really push funding and that projects from the chapters can really get off the ground.”