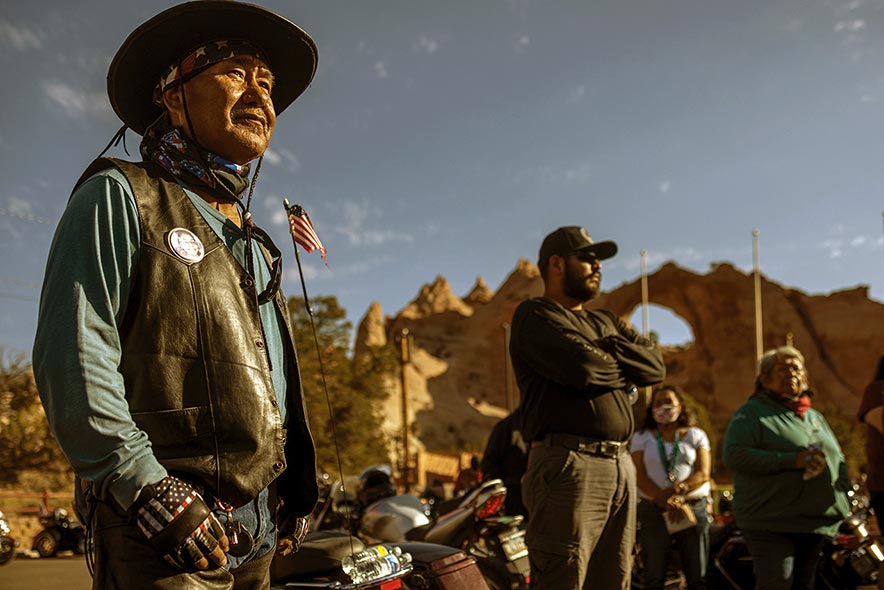 Navajo Times | Sharon Chischilly
Jerry Bahe of Albuquerque stands with his fellow riders before the start of the Annual Lori Piestewa Navajo Hopi Honor Run in Window Rock on June 11.

For one day, grief took a backseat.

For two Gold Star mothers who lost their children to war, roaring motorcycle engines shaking the ground underneath them was a welcome sound that reminded them that they were not alone.

Shondee and Piestewa stood by, ready to welcome the riders with a warm embrace and appreciative handshakes.

It’s why the founder of NNHR, Bobby Martin, Lori’s cousin and who saw images of her on TV during his birthday celebration, created the annual remembrance and honor ride, which is usually a four-day run. This year’s run was a one-day ride because of the COVID-19 pandemic.

The ride, which began 19 years ago, was intended to let Percy know she was not alone, said Martin, on June 11. 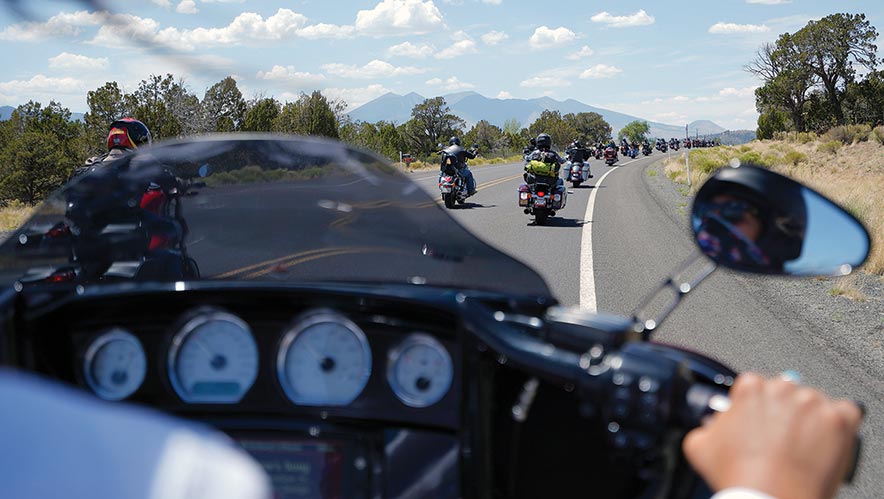 Navajo Times | Donovan Quintero
The Navajo Hopi Honor Riders travel in formation as they approach the Doney Park area near the San Francisco Peaks on June 11.

“We were in Gallup, I was outside grilling, my family was inside watching TV,” Martin recalled, “all of a sudden my wife is yelling, ‘Bobby, Bobby, come inside.’

“And so, I went inside, and so I look at the TV screen, I see my cousin’s picture on the screen, and we’re like, ‘Whoa, what’s going on here?’”

After seeing the images of his cousin, his 33rd birthday turned from a day of celebration into a day of trauma and heavy grief. Coming from a very close family, he knew he had to see his aunt and uncle, Terry Piestewa, in Tuba City, where they were living at the time.

He and a few of his close biker friends decided to ride to Tuba City. They set out with the images of his injured cousin sister seared into his mind.

Lori, who was assigned to the 507th Maintenance Company in the U.S. Army, and her company ran into an ambush in Nasiriyah, in southern Iraq, when a rocket-propelled grenade hit their Humvee. She, Shoshana Johnson, and Jessica Lynch were injured in the attack and taken prisoner, and she later died from her injuries. Johnson and Lynch survived and were later rescued.

Martin said one of the last cherished moments, the last time he saw Lori alive, was at the Western Navajo Fair when she surprised him with a hug.

“Me and my family were out there eating at a restaurant, and we were getting ready to go to the carnival,” Martin said. “We were sitting there, and these arms came up behind me and gave me a really big hug. She said, ‘Hey, cousin, how are you doing?’ And I turned, and it was Lori.” 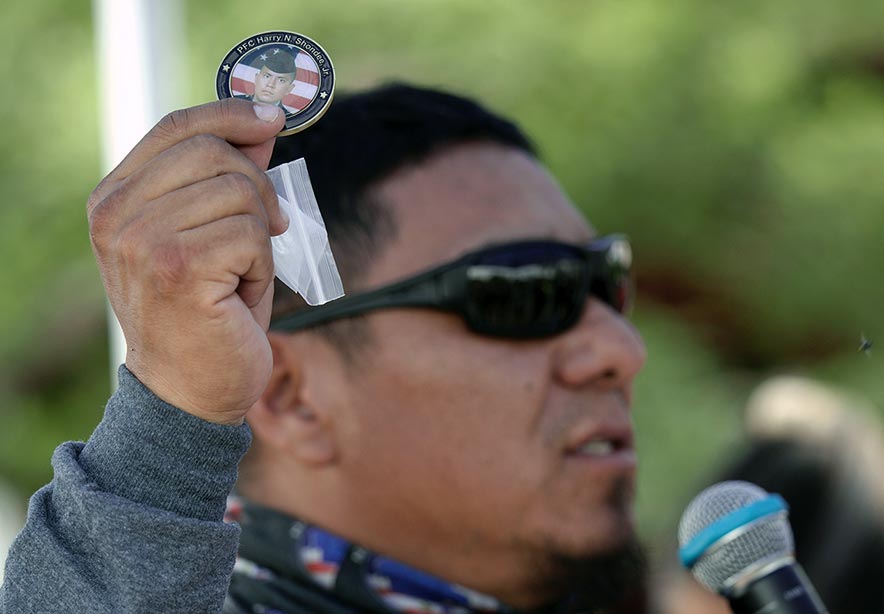 Cpl. Bernice K. Yazzie, 21, after re-enlisting with the Marine Corps, died on Nov. 28, 2004, while on a visit back home in Tohatchi. Her father, Benson Yazzie, who rode for her on June 11, said she died in an automobile accident while returning to Camp Pendleton, California. She was supposed to report to her new duty station in Hawaii after serving two tours in Iraq. She was buried with full military honors, said Benson.

This year’s ride made a stop in Ganado, the hometown of Pfc. Shondee, where they presented a coin with an image of Isabel’s son imprinted onto it. Martin said the nonprofit organization tries to honor Gold Star families with a challenge coin every year.

Shondee was assigned to the 2nd Battalion, 12th Armored Cavalry Regiment, 1st Cavalry Division. According to military records, he died of injuries sustained while on patrol on Aug. 3, 2004, when an improvised explosive device detonated near his vehicle in Baghdad, Iraq.

He was active in sports at Ganado High School and was a member of the National Honor Society.

After the presentation, Isabel thanked the riders for remembering his son and shared a memory of her son and her daughter arguing over their parents.

“One time, what’s that place called, Furrs in Gallup, when they first opened. We were all eating. And then we sat at a table. The boys on the other table and then him (Pfc. Shondee) and her, we were sitting with them at our table. And then they got into an argument. He was about maybe 2, and he was saying, ‘Mama-mama, Dada.’ And she got up in the chair, and she said, “No, that’s my mom, Izzi, and my dad is Harry!’” Isabel remembered. “We were so embarrassed, we just left, and everybody turned their heads; they were just laughing. I just remembered that. That’s history.”

Isabel thanked the riders and reminded them to “put something in their tummies” before continuing their journey, with some snacks they gathered for them.

“Thank you again. We appreciate it very much; thank you, to each and every one of you, for being here. Get something to eat,” Isabel said.

Heroes of the red, white and blue 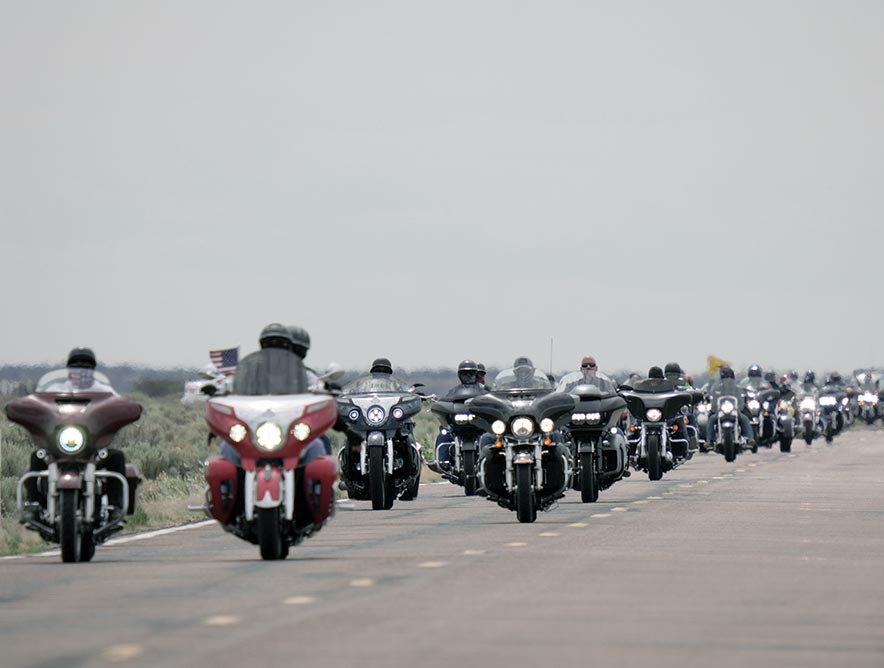 Navajo Times | Donovan Quintero
The Navajo Hopi Honor Riders travel in a group as they travel in formation during the Annual Lori Piestewa Honor Run to Flagstaff on June 11.

West of Steamboat, Arizona, Army veteran Leroy Nelson Jr. and his family stood by, ready to wave at and cheer on the procession about to ride by.

Nelson said this was their first time doing something like this but decided they wanted to represent Walter Nelson, who was killed in action. Walter’s name is on the memorial wall at the Navajo Veterans Memorial Park in Window Rock, said Leroy.

“We want to represent him today and just to be part of it,” Leroy said.

On the Hopi reservation, the ride made a quick stop in Kykotsmovi, Arizona, where Chairman Tim Nuvangyaoma said America needed to know that Native America also fought for the country.

A hot breeze kept the riders company after leaving Kykotsmovi. They rumbled through Leupp as oncoming vehicles pulled off to the side. Some honked, and some waved at the riders. After nearly two hours, they made it to Lori’s mother’s place.

Percy Piestewa greeted the riders at her front doorstep, with Dook’o’oos?ííd overlooking them.

A Last Roll Call ceremony for the 16 Navajo and Hopi servicemen and women who paid the ultimate sacrifice since 2003 was given.

Percy lost her husband, Terry, a Vietnam veteran, nearly five years ago. They were together for 56 years, she said. The loss of her daughter created a void in her heart that would always be there.

“There are good days; there are bad days,” she said. “But I’m doing great – I’m healthy. I’m working. I’ve helped my babies graduate.”

Percy is referring to her grandchildren, Lori’s two children, Carla and Brandon, who were 3 and 4 when they lost their mother. She added that Brandon graduated with his bachelor’s in exercise science and nutrition, and Carla is a certified medical assistant.

She said her nephew’s annual ride to honor his cousin sister and all the other servicemen and women was a way of giving back and letting Gold Star and Blue Star families know they were not alone. Her late husband wanted Bobby never to stop.

“He (Terry Piestewa) was the one that said, ‘We need to we need to thank the veterans, the riders for what they do,’” Percy said. “And from day one when they first came, the first time in 2003, we’ve been able to do that, and we’ll continue to do that. It’s a small part, something we can do to give back for what the veterans do for us.”

Percy said her daughter’s purpose has been to unite people in peace and unity.

“She’s done a great job of that, bringing people together, helping us heal,” she said of her daughter.

More could always be done, though, for veterans who have PTSD, said Percy.

“Always remember that; thank God for the veterans that give us those freedoms to be able to have fun and be able to get together with our families,” Mrs. Piestewa said.

And of Bobby and Lori, she shared how all the kids grew up so close.

“They were connected, Adam, Lori, and Bobby. And then Bobby’s birthday is on the 23rd when we lost her,” Percy said. “She loved life; she loved all her cousins. If she saw them anywhere, (she) always acknowledged them.”

About 100 bikers participated in the June 11, Navajo Hopi Honor Riders’ annual remembrance and honor ride for Navajo and Hopi servicemen and women who paid the ultimate sacrifice. They rode a total of 196 miles from Window Rock to Flagstaff.

Here is a list of Navajo and Hopi servicemen and women who died or were killed in action from 2003 to the present:

Her father said she served two tours in Iraq in First Marine Division. And she returned in 2004. She had re-enlisted and was scheduled to report in Hawaii. She graduated from Tohatchi High School in 2001.