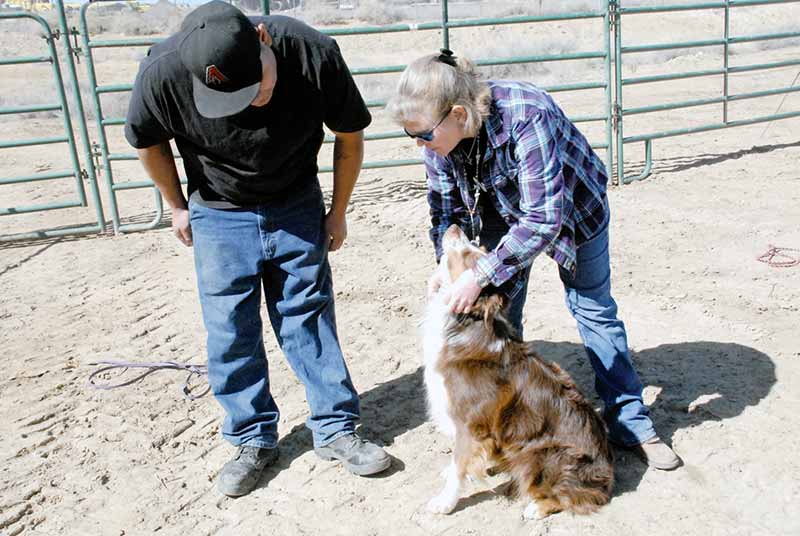 Trainer Shawna Davis talks to Navajo Technical University student Nicholas Clark about prong collars during her demonstration at the Veterinary Hospital on March 6. Clark said he didn’t know anything about prong collars until Davis explained them. (Times photo – Shondiin Silversmith) 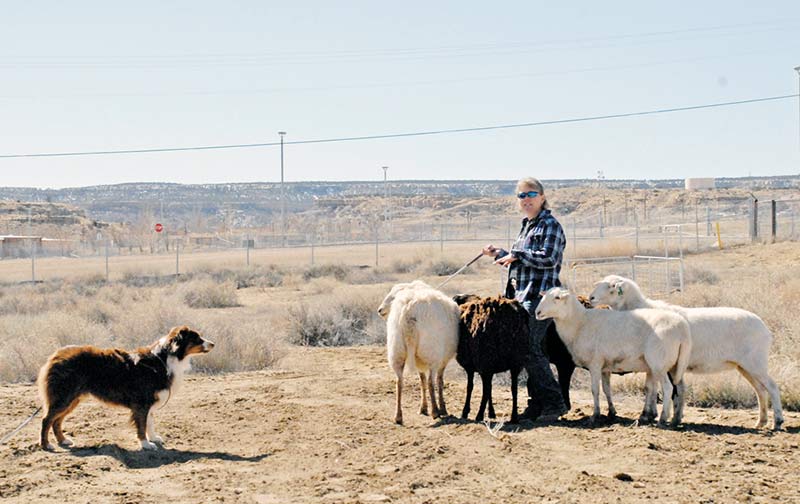 The Navajo Nation doesn’t have a shortage of dogs, but there is one type of dog that is sought after by many – sheep dogs.

Gauge, an Australian shepherd, tilts his head back as his master clips on the prong collar during her demonstration on March 6. Gauge was one of three dogs trainer Shawna Davis worked with during her visit. (Times photo – Shondiin Silversmith)

The sheep dogs found on the rez have the ability to take care of those wooly creatures the Navajo people have relied on for survival, as the furry herder is usually seen trailing behind them.

But how do those dogs herd sheep? Is it instinct or perhaps training? Those were questions the staff members at Navajo Technical University’s Veterinary Hospital wanted to be able to answer, so they brought in a professional.

Twyla Zoey Benally, veterinarian at NTU, said they wanted to offer this demonstration to the community because surveys from their sheep workshop last year showcased it was an area of interest.

Benally said this demonstration was just a way to help those sheep owners who aren’t able to watch their livestock all the time.
“Sometimes you don’t have folks around to help you. If you have a dog it will make it quick,” she added.

Davis said that the whole thought process behind the ICE methodology is the dog owner takes their dogs natural instincts and create a connected working relationship so that it’s enjoyable for the dog.

Trainer Shawna Davis talks to Navajo Technical University student Nicholas Clark about prong collars during her demonstration at the Veterinary Hospital on March 6. Clark said he didn’t know anything about prong collars until Davis explained them. (Times photo – Shondiin Silversmith)

“The whole point is to have fun and the dog gets to work,” Davis said, and once that is understood you won’t have to walk all over the place to get your livestock.

“You’ll have a working partner with what you’re doing,” she added. “It makes everything much easier.”

Davis wanted people to know that pet obedience is not the same as training a dog to herd sheep because basic obedience is sit, laydown and come.

Davis said when you are training you have to remember that “dogs understand touch and they understand sound.”