Most at risk: COVID-19 aid not getting to everyone who needs it

As Laverne Joe of Klagetoh was driving home from helping with a food delivery in Grey Mountain, Arizona, last Wednesday, she started to wonder whether, in spite of all the government-, church- and nonprofit-sponsored food and water distributions on the Navajo Nation in response to the pandemic, there were still people slipping through the cracks.

In a few minutes, her question was answered. Heading north on Highway 77, she spotted an elderly couple hobbling along the roadside, each carrying a plastic grocery bag. “They had a bottle of soda, a loaf of bread and a can of pork, and that was about it,” Joe recalled.

She offered them a leftover food box from the distribution, and since they had no way to carry it, drove them to their home. It was a good 10 miles up the highway and another two miles up a bumpy dirt road. The couple explained they walk to the highway and hitchhike to Holbrook every couple of days to get groceries. Without a car, they can only bring back what they can carry, so there’s no way to stock up.

Joe, a retired medical technologist and former Klagetoh Chapter vice president, had seen some humble dwellings in her day. Still, she was shocked to see how Lester John, 73, and his companion, Evelyn Begay, were living.

“The house was literally falling apart around them,” she said. “If you were going to fix it up, I don’t know where you’d even start.”

John complained that he had recently found a large snake in his living room.

John and Begay were grateful for the food box, but said they were running low on water. Although there is a water tank within sight of their home, they have no vehicle and no way to fill the two 55-gallon barrels they siphon water from for drinking, washing and bathing outside in a repurposed horse trough. 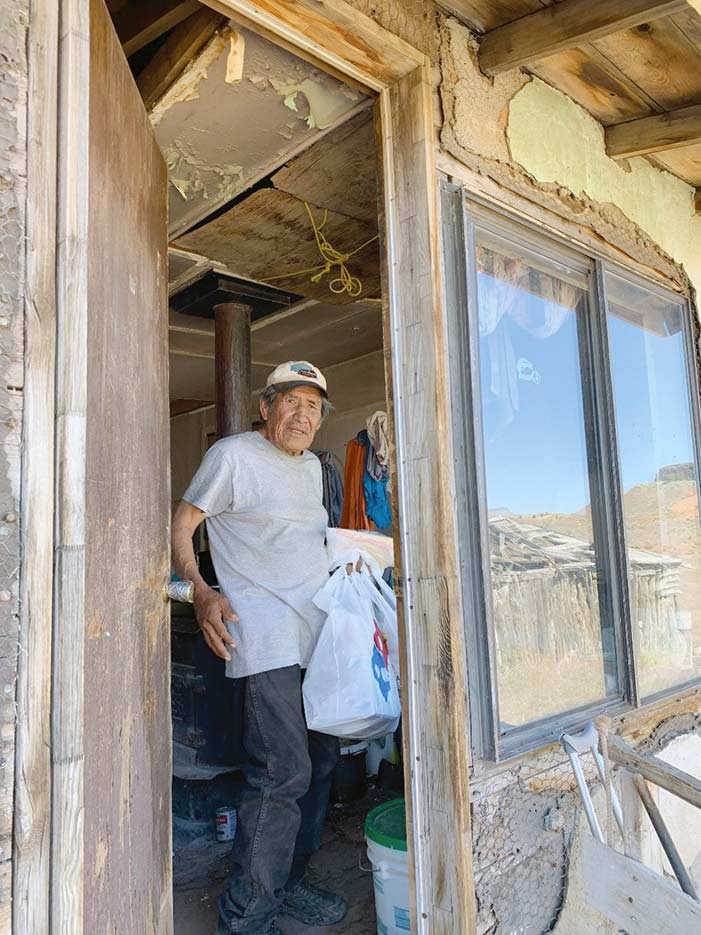 John said he relies on an uncle who has an ATV and sometimes comes by to pick up one of the barrels and fill it, but he hadn’t been by in a while.

Since the couple has no phone, they can’t call for help.

“This is exactly the kind of people who are most at risk of getting COVID, and they can’t even ask for help,” noted Joe. “How many thousands of people across the Navajo Nation are living like this?”

Since curfew was approaching and Joe didn’t feel she could maneuver a full barrel of water by herself, she left, promising the couple she would send help the next day. On Thursday, “I woke up thinking about them,” Joe said. She called her Council delegate, Raymond Smith, who said he would call the COVID-19 command center to see if they could deliver some water.

The next day, unable to forget about the couple, Joe decided to go back and make sure they had received the help they needed. She swung by the Navajo Times to ask a reporter to come with her and document the visit.

Joe and this reporter reached the scene by late afternoon. The couple said no one had come by and the water situation was getting dire. According to Joe, Smith later told her he had called the command center and nobody had answered.

Joe offered to take the couple to the water tank in her truck and fill up one barrel. When we arrived, there was a line at the 40,000-gallon tank that fills from a spring. Several people had 200-gallon tanks in the back of their trucks, and with the low water pressure from the source, they took about half an hour to fill. Joe struck up a conversation with the man ahead of us in line and, discovering he was a clan brother to her, talked him into letting her in front of him.

While people were waiting their turn for water, they got out of their trucks and conversed with each other. No one was wearing a mask, and social distancing was not observed. Joe’s clan brother, who declined to give his name, said there had been no cases of COVID-19 in Indian Wells so far, so people weren’t worried about it, even though a couple of people in nearby Greasewood Springs had tested positive.

Asked if he was worried about catching COVID-19, John replied he was safe because he had gotten “the shot” last fall. “He means the flu shot,” said Joe, adding to John, “Cheii, that one’s not going to help you.”

John did have a mask that Joe had given him during the previous visit, but it was tucked up inside his baseball cap. Apparently, food and water are not the only things that haven’t trickled down to remote families on the reservation. Education is lacking too.

Asked if there had been any food deliveries in Indian Wells, the other man said there had been one just the previous week, but it hadn’t been advertised. The food was at the chapter house, and “when I went there no one was around,” he said. At any rate, it wouldn’t have helped John and Begay, Joe pointed out, since they don’t have a car.

Once back at John’s house, Joe and this reporter discovered they were not strong enough to lift the full 55-gallon drum out of the truck bed, even after siphoning quite a bit of water into some one-gallon jugs John had lying around. John tried to help, but had to admit he was not the burly railroad worker he once had been. He seemed embarrassed at being helped by two older women, and wanted us to know his weakness was a recent phenomenon.

“You see this scar?” he asked, pulling up his shirt to reveal a long, jagged indentation from chest to belly. “I got stabbed in Gallup. I survived that.” He used to climb the hill behind his house every day, he said, but not any more. Tears started to well up in the corners of his eyes.

Joe, the former health worker and chapter official, had little patience for this bout of melancholy. “Everyone needs help, Grandpa,” she said. “I couldn’t have done it myself either. Luckily this lady from the Navajo Times is here.”

Eventually we stacked old tires below the tailgate and pushed the barrel onto them, losing about a quarter of the water before we were able to right the drum.

Joe asked for a tour of the house to assess their needs, during which John pointed out the empty case for the home’s electric meter. “We don’t have electricity, but we get a bill from NTUA every month,” he said, adding that it’s usually about $43.

Joe said she would continue trying to get them some help. Before she left, she prayed with them and explained in Navajo what the coronavirus is and how to prevent it. She left them with a bottle of her homemade sanitizing and hand-washing solution she keeps in her car: water, dishwashing liquid and a dash of Clorox. “If you run out of water, just rub this on your hands and wipe them off with a towel,” she offered.

After the weekend curfew, Joe checked on John and Begay again and they still hadn’t received any help. No one answered a call to the chapter house, and the Council delegate for Indian Wells, Elmer Begay, contacted by phone, said he had seen John’s name on a waiting list for a water line but was unaware they were in immediate need. He said he would alert Indian Wells’ community health representative to get the couple on the list for food and water deliveries.

Joe said that’s a load off her mind, but she still worries about the thousands of Lester Johns across the reservation who haven’t yet come to anyone’s attention. And, she noted, once COVID is controlled and the deliveries stop, they’ll still be in the same boat.

“The way these people are living is a threat to their health,” she said. “They have snakes, I’m sure they have mice, they have mosquitos that now carry West Nile. They probably have asbestos in their home. “The only way to solve this is to use some of that $600 million the Navajo Nation got from the federal government to get them into decent housing with running water and electricity that works.”