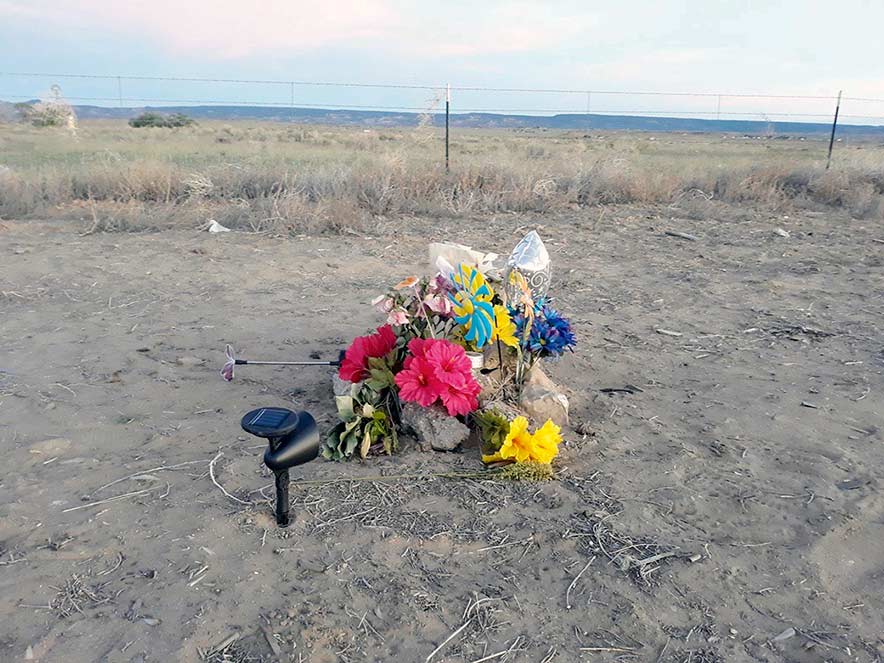 Navajo Times | Quentin Jodie
A memorial for Candace Dean has been placed near Mile Marker 17 on U.S. 491 near a bridge in Mexican Springs, New Mexico. Candace was killed in a car crash near the memorial site on March 20.

A makeshift memorial adorned with flowers, balloons and a pinwheel will be a constant reminder of what the Dean family has lost.

Last Wednesday, the Mexican Springs, New Mexico family experienced a loss that no family should endure as middle child Candace Dean passed away in a tragic car accident, not far from the family’s homestead.

“For years to come we’re just going to be looking at that site to where Candace left us,” matriarch Marinda Dean said of the memorial site, which lies near a bridge on U.S. Route 491 near Mile Marker 17.

“It’s hard for me to drive by there, knowing that I couldn’t be there for my daughter,” she added.

The accident happened on a clear sunny afternoon as Candace was headed to Gallup with older brother Darnell and younger sister Niquole so that they could meet with their dad.

The three siblings packed the family’s Ford Explorer with Candace sitting directly behind her sister, who was driving, while their brother sat on the passenger side.

From what Marinda has gathered, the driver of the other vehicle was headed northbound and for unknown reasons he cut across the median “and hit my kids.”

“I think it could have been a head-on but my daughter swerved to the right to avoid the head-on collision,” she said. “But he still hit them on the driver’s side, right where Candace was sitting.”

According to a police report, FBI agents have charged Jimeson Woods of Shiprock with involuntary manslaughter and reckless driving.
The accused individual is being monitored by the U.S. Marshall’s Office in Albuquerque where he is in a hospital recuperating from injuries suffered in the accident.

Marinda said she was at home when the accident occurred and after a bout of hysteria she gained the courage to go see what happened.

“I eventually got there with my niece driving me there,” she said, her voice cracking. “I wasn’t able to hold my baby and touch her one last time. I just wanted to let her know that we were there for her. We just didn’t make it there in time.”

Not long after she arrived her husband reached the accident site and the only thing they could do was embrace each other.

Marinda said Candace was spunky and she served as the family’s comedian.

“That is what we’re going to miss,” she said. “She always made us laugh and she always had a big smile. She was really family-oriented, always asking if we needed help.

“She will be truly missed, especially with her siblings,” she added. “They all had a connection with her. We’re going to miss the jokiness and her smile.”

“She was more of a mother to him than I was,” she said. “She just had that beautiful connection with her baby brother.”

Marinda said her youngest son is having a tough time coping with his sister’s loss.

“He’s trying to accept it,” she said. “We’ve found him alone in his sister’s room with tears running down his face. He doesn’t want to accept that his older sister is gone because she was his protection, his shield.”

As a three-sport athlete at Tohatchi High, Candace was looking forward to entering her senior year, her mother said.

“She had a lot of passion for running,” the Dean matriarch said. “She had that drive and she would always tell me after every meet that she had cut her time. She was Tohatchi’s No. 2 runner and I could tell that she was striving to be their top runner.

“I think she wanted to pursue running and go somewhere with that,” she said. “She was still running with her sister Niquole even though they were not in school.”

Candace also played basketball and volleyball, a sport she picked up a few seasons back.

“She barely got introduced to volleyball and that sport came natural to her,” Marinda said. “She just shined in that sport.”

Marinda said there are so many memories they have of their daughter but the one that stands out is her love for baking.

“That was her other passion,” she said. “She wanted to open up her own bakery shop here on the Navajo Nation. She wanted to design cakes like you see on TV.”

Marinda said her daughter picked up a few recipes from her grandmother, Sadie Dixon.

To help cope with their loss, Marinda said the family is leaning on the outpouring of support from both family and friends.

“The support that we’ve got is mind-blowing,” Marinda said in between tears. “It’s amazing. I just wish my daughter was here to see it. It just shows me that a lot of people truly cared about her, especially our Lady Cougar basketball family.

“The prayers that is being sent is really helping us,” she added. “It’s helping us to collect ourselves every morning and get our day going.”

She said it’s hard to put into the words the amount of love they are receiving from the plethora of well-wishers.

“As a family we want to thank them,” she said. “There is no way of repaying what they’ve offered us — all the love, support and the prayers we’ve received. It’s so genuine and heartfelt.”

The family will be offering trays of food through a drive-thru service at a reception following Candace’s gravesite funeral on Friday, which is scheduled for 11 a.m. in Mexican Springs.

“As we move forward to her services it’s going to be very hard,” Marinda said. “We’ve been told it’s going to get harder and harder but I can’t imagine it getting any harder than this.”