‘Something that needed to be done’: Auto shop owner sees success, donates to students 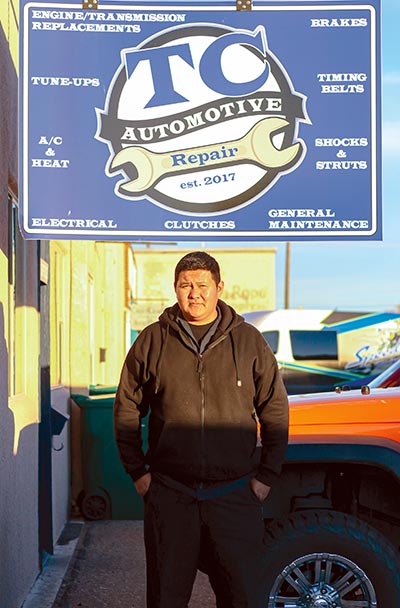 The owner of TC Automotive Repair, O’Neil Bileen, not only supports the community by fixing vehicles, he also helps students with laptops and school supplies.

“I was pretty much managing that place (Don Robbins Auto Shop) and when it closed, it was a natural transition to running this place,” Bileen said, “We started the shop, it was really small, and it was just a couple of friends of mine helping me from the beginning.”

During its first year in operation, the shop started off slow but soon became recognized by the community.

As business began to improve, Bileen decided to start giving back to the community with a holiday repair giveaway. The giveaway included up to $500 of labor and $500 in parts.

“I wanted to do something that I thought needed to be done and also I would appreciate it if I wasn’t in a good position.” he said, “I know we can’t help everybody, but we can at least do something.”

The school falls under the U.S. Bureau of Indian Education.

David Smith, principal of Nenahnezad Community School, was proud to work with Bileen, especially as the coronavirus is active across the nation.

“I got an inquiry message that a former student would like to donate school supplies to the children,” said Smith, “He wanted to talk to me about giving students school supplies.

The day the school supplies were distributed to students, Smith recalled the students smiling and their happy families.

“It was nice of him to think of the kids, they will have good memories,” Smith said. “This is something that he wanted to do himself.”

Bileen gave school supplies to the students not to gain recognition, but just to help the kids.

“If that was done while I was going to school back then, it would have had a lasting memory on me,” he said. “If it helps a kid want to be better or work hard, it makes it worth it.”