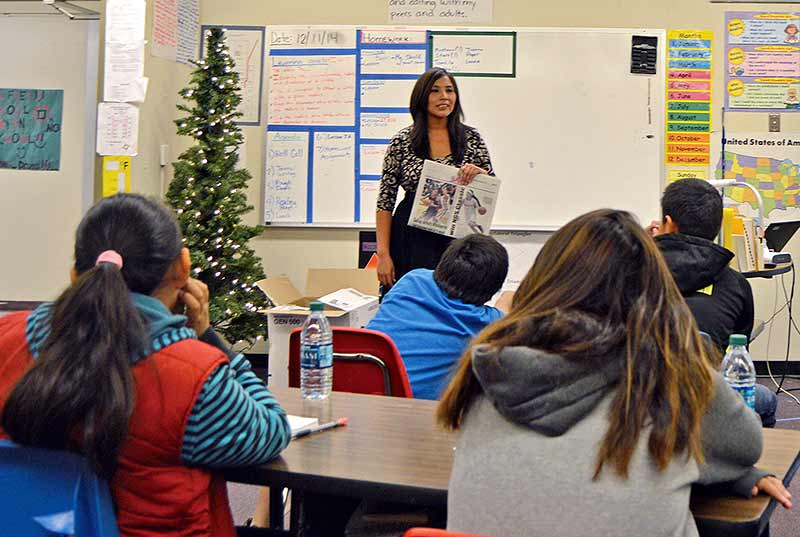 As the youngest editor and the only female in the Navajo Times’ 50-year history, Candace Begody has been invited by at least a dozen groups to share the story of how she came upon her career.

But until this week, never at an elementary school.

Begody was invited to speak at a student assembly at Cottonwood Day School last Thursday as part of a weekly series of lectures by successful young Navajos in challenging careers.
But up until a few minutes before her presentation, she was fretting about how much of her story to tell the kids.

It’s not an entirely happy story, and it involves death — a topic traditional Navajos frown on sharing with children, who represent life.

But after she asked the 150 or so students how many of them had lost someone close to them and about half the group’s hands shot up, she knew they could handle the truth, and it may help them to find their own way. 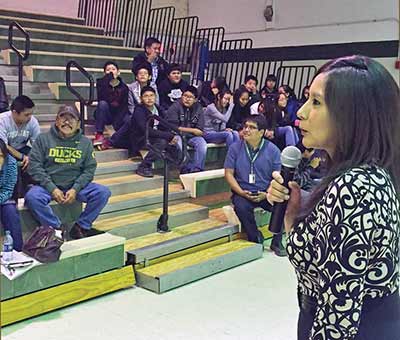 “I was right where you guys are,” Begody, 27, told the kids. “I was sitting in the bleachers.”

A native of Kinlichee, only about 45 minutes from Cottonwood, the Times editor described a life the rural children were quite familiar with: growing up without running water or electricity, “five or 10 miles down a dirt road.”

Begody ran track and cross country, and played basketball at Ganado High School. It never occurred to her she would go to college until a chemistry teacher took an interest in her.
“He believed that this ch’ízhii little Navajo girl who used to herd sheep with her grandmother could go to college,” Begody said.

Begody chose the University of Arizona, and, probably because of her teacher’s influence, majored in chemistry. She had been there less than a year when the call came that shattered her life. Her older brother had been killed in an auto accident.

Luckily her new friends and family at U of A convinced her not to drop out, but she did come home for the summer. Looking for a way to keep busy and escape her grief, she showed up one day at the Navajo Times office.