‘We need to be heard!’: Disability coalition voices issues, reaches out

By Colleen Kean
Special to the Navajo Times 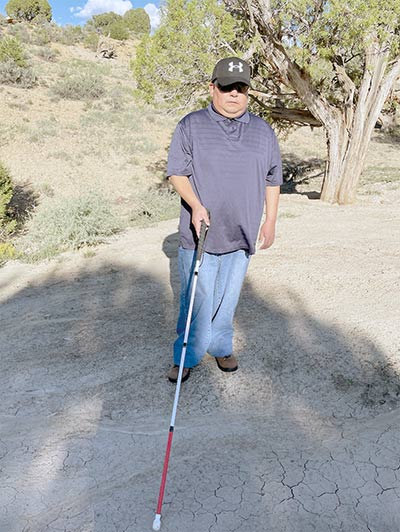 He said he originally dealt with it like many other people do –staying home and “hiding out.”

He found help from a non-tribal program Assist to Independence and a support group affiliated with the organization, Northern Arizona Tribal Disability Coalition (NAzTDC), a group reaching out with advocacy, information, referrals and friendship.

Today, Begaye is active and involved while coping with his disability.

Others have found help through additional off-reservation programs like Colorado’s Center for the Blind, Native American Disability Law Center and Red Feather, an indigenous organization, to name a few.

Members of the coalition wish there were similar services closer to home.

“We have a long way to go,” said Elton Yazzie, the coalition’s president, who is blind.

Coalition members are mostly from Navajo communities like Tuba City, Shonto, Ganado, Window Rock, Burnside and Tohatchi. But the organization is open to members from all nations, tribes and Pueblos.

Carlene Honyumptewa is Hopi. Another member is Hopi and Navajo.

On the Navajo Nation alone, there’s an estimated 50,000 people with disabilities, according to Hoskie Benally, community and government liaison for the law center.

What about us? A call for an accessible Navajo Nation

The coalition meets in person or uses a free conference call application holding meetings twice a week, one formal another social. Think radio program “Native America Calling” with a specific focus and host Elton Yazzie tying it altogether. The meetings start with a prayer then introductions with everyone identifying themselves by clan.

The group aims to let people know they are not alone by helping them learn how to advocate for themselves while backed up by a group of friends.

Yazzie is from Tuba City. He and other members established the group after attending a community leadership academy. After the academy, they started networking.

“That is how we met Hoskie Benally (from the law center),” Yazzie said. “We did a focus group session with them and learned more about disability needs on the reservation.”

At an online meeting one day in early September, upon the request of the Navajo Times, members spoke about issues and challenges they face.

Their issues were very similar to issues and challenges reported in focus groups and surveys distributed and analyzed by the law center many years go. See Part 1 of this report in the Sept. 1 Navajo Times titled “What about us? A call for an accessible Nation.”

While coalition members said they appreciated President Jonathan Nez’s recent commitment of $13.3 million to upgrade some chapter houses and other public buildings, they say they see it as a first step on making the Nation accessible.

They would like to see ongoing annual funding to cover all issues and a disability training center.

Here are some of their stories.

Begaye said he hasn’t received any services from the Navajo Nation and he’s been disabled since 1985. Red tape usually gets in the way.

Like the time he tried to get the tribe to help fix his leaky roof. First, he went to his chapter house.

There he was told to go to the agency office in Tuba City. When he went to Tuba City, he was informed he had to get a home-site lease in his own name before they could help him.

His parents had passed away and they had left the house to him.

Getting the new document called for him to go to several offices and residences.

‘With our disabilities, we don’t get around too good,” Begaye said. “It is hard to get around when you are in a wheel chair.”

“He lives in his parent’s old home,” said advocate Joetta Goldtooth, an Independent Living Coordinator with Assist to Independence. “It already has archeological reviews and whatever needs to be done.

“They want a whole new survey,” she said. “Why does he need that? They could give him the home-site lease.”

He eventually got help from an off-reservation program, Red Feather and Goldtooth and her husband.

“It doesn’t take a lot to help someone,” Goldtooth said.

Heather Joe is also the board secretary for Assist to Independence. She said housing and transportation are on the top of the list when it comes to what is needed for the disabled on the Navajo Nation.

Goldtooth agreed. She brought specific attention to the former Bennett Freeze Area, which was a ban on development by the federal government on 1.5 million acres of Navajo lands during negotiations between the Navajo and Hopi tribes.

It was put in place in 1966 and lasted until 2009. Although the ban has been lifted for many years, Goldtooth said promises haven’t been kept.

“I don’t know how many promises were made that we are going to get housing,” she said. “So far, we haven’t gotten anything.”

She added that the Tuba City Chapter had the opportunity to receive $1.6 million in Covid funding but they decided to send the money back to tribal administration in Window Rock without using it.

“They could have bought so many mobile homes. some of them for the homeless. But nobody got homes,” she said.

“We need to be able to get to the grocery store, doctors’ appointments or visit friends.” said Joe.

Irene Eldridge became disabled about two years ago and tried to get services through the tribe’s disability program, but wasn’t qualified because of her age.

“If the tribe was really interested in helping people with disability, they would have public hearings and find out what the people need and get them services,” she said.

Speaking up for another member, she said he needed a bed and some dishes. 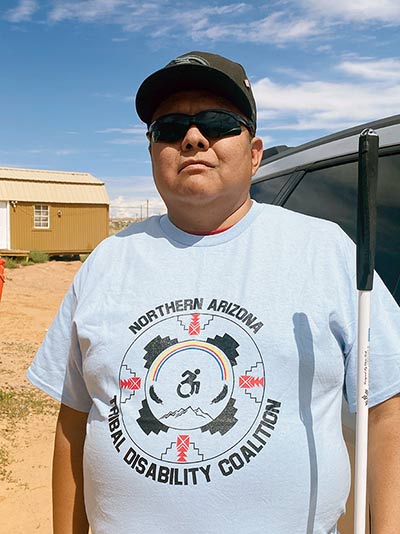 “Like I said, I’m blind, so I’m going to need some decent training to get a job,” Elton Yazzie said. “The Navajo Nation needs a training center.”

Honyumptewa pointed out that electronic devices and software that have voice technology is expensive creating another barrier to independent living.

With that in mind, members proposed that the Navajo Nation Training Center could offer the same services provided off tribal lands – training in adaptive technology, work skills, job placement and independent living skills.

“Our people could teach our people,” Darin Nez suggested.

Yazzie also wants roads and sidewalks to be safer for the disabled.

“Especially in Window Rock (the capital of the Navajo Nation) by the gas station,” Yazzie said. “They need to maintain them.’’

To increase awareness of the many difficulties the disabled face daily, the coalition is rolling out a disability awareness campaign for the Navajo Nation Western Fair coming up Oct. 6 to 9.

“We got T-shirts, flyers, brochures and posters printed out and we may be in the parade on Elderly Day,” Yazzie said.

Besides reaching out at the fair, advocate Goldtooth encouraged coalition members to stay active and involved (like Begaye).

“We can carpool to Window Rock,” she said. “Bring signs to hold up in front of the tribal Council Chamber. We need to be heard!”.