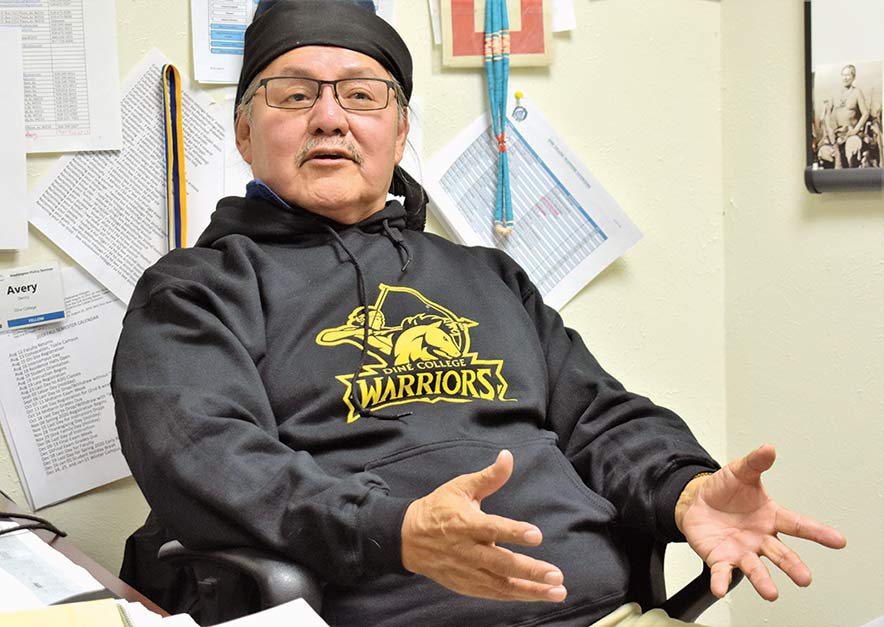 NAVAJO TIMES | RIMA KRISST
Professor Avery Denny in his office at the School of Diné Studies and Education at Diné College in Tsaile, Ariz., on Wednesday, Feb. 5.

Despite the plethora of issues that afflict the Navajo Nation, from substance abuse to the loss of language, hataalii and professor Avery Denny believes there is a remedy for all ills embedded in Diné traditional knowledge.

Steeped in the Diné way of life since birth, Denny says it’s time to return to the Navajo holistic wellness model, which is among the subjects he teaches at Diné College. “Cultural deterioration came into our Navajo land,” said Denny. “We’re losing the land, our way of life, our elders and our culture.”

Denny says it’s important to follow the natural law. “That’s our belief. That’s our faith. We live by it,” he said. The sun is the most powerful energy in the whole universe, says Denny. “We have to change back to our Navajo way. Get our land back, get our people back,” he said. “We need to start healing.”

‘Wisdom in the language’

For Denny, maintaining a hopeful and positive outlook is not just a preference but also a matter of urgency. He says the elders used to say that there would be a change toward chaos on earth during his lifetime, which is evidenced in today’s world.

They warned not to forget to learn the language and cautioned, “Don’t try to be somebody that you’re not,” said Denny. “They said if the language is lost, that would be when our logic and common sense are going to burn up, because the wisdom is in the language,” he explained. The elders predicted that the consciousness that was awakened with the origin of the Navajo language would disappear if the language is lost and all that will be left is emptiness.

“There will be no awareness of what is spiritual or how to take care of yourself,” said Denny. Denny says the elders used to get together regularly and share their knowledge so that everybody could be at the same level. The old teachings were carried by word of mouth by scholars and knowledge-holders, said Denny.

Today, he says, many elders live in a “silent world,” where young people are speaking English and the elders are sitting in the corner by themselves. They are often not respected the way that they used to be, he said. Diné Fundamental Law and the philosophy of Sa’ah Naagháí Bik’eh Hózhóón encompass what is needed for well-being and the preservation of life, says Denny.

In fact, it is a tenet of Diné Customary Law that it is “the right and freedom of the people that there always be holistic education of the values and principles underlying the purpose of living in balance with all creation, walking in beauty, and making a living.”

“The Diné Wellness Model tells us how to preserve our health, our mind, and how to live, strengthen, and survive. How to keep our mind, body, soul and spirit clean and balanced. How to not be a victim. How to recover and have resilience,” says Denny. That’s where faith and ceremony come together, he says.

Ceremonial life is Avery Denny’s passion. “I love to be over there among relatives, just to visit with them, sing with them, dance and see them perform,” said Denny.

When he was just a baby, Denny’s parents, who were both traditional practitioners, would stand him up against the wall in the hogan in his cradleboard so he could watch what they were doing. “I was born into it and raised with it,” he said. “It was just there around me, the music, the songs, the lyrics and the stories. I was filled with it.”

His dad would explain to him word for word what each song meant. “It was right there,” he said. “I didn’t have to go elsewhere.”

Denny says his comprehension about holistic healing and Diné spirituality expanded as he grew up and attended countless ceremonies with traditional elders. Today, one of the issues he is most concerned about is preserving the integrity of those sacred ceremonies.

This teaching is also embedded in Diné Traditional Law: “The various spiritual healings through worship, song and prayer (Nahagha) must be preserved, taught, maintained and performed in their original forms.”

Denny said it is encouraging to see the generation coming up, especially those in their twenties, who are interested in learning more about Navajo philosophy and culture, regardless of how they were raised. “They find it fascinating,” he said.

Denny says that in many of the rural areas on Navajo there are still young people who are following their fathers, mothers, uncles and grandfathers. “That’s good, that’s fantastic,” he said. “I praise that.”

To understand the stories that come from the ceremonies, you really have to be fluent in Navajo, he says. Denny says people can start to learn the songs from a variety of sources, including books, listening to the radio or from recordings.

No method of learning is wrong as long as you pick it up, he says. However, students should be mindful that the way they’ve learned the songs might not be the authentic way of singing them. “Then you have to go to the master, who can do the corrections,” he said.

It’s also important to remember that the songs are for ethical use only within the ceremony, says Denny. “You can’t take it out of the context,” he said.

Denny says many of the ceremonies have already been lost. “On the Navajo Reservation, I believe there are less than 20 major Hataal, major Chant Way,” he said. “Every time an elderly deceases, all that knowledge is gone, never to be retained or retrieved. It just disappears forever.”

He estimates maybe 30 percent of the original ceremonies are left. “We have to preserve that in its original composition,” he said. Denny said that in the 1960s, the authentic ways of the ceremony still existed, but even by 1970 it already started to change.

Today, he says, when you go to ceremony, it doesn’t seem like the old vocals, the old beat. “The traditional singing has been contemporized, really washed down. Even the words are not pronounced correctly.”

Back in the day the songs were sung in a calm, gentle, rhythmic manner that lends itself to telling a story, says Denny. “They used to sing it slower, without the big beat and the loud sound,” he said.

He says when he was young the teachers would say, “Listen with your ears and eyes.” Denny says that the elders who are 70 and older still sing the traditional way. “The new generation, they love to go to ceremony,” he said. “The excitement is there. They try to sing, but nobody corrects them. That’s important to do.”

Denny compares learning the songs to the discipline of taking a music class where you have to study the notes, pitch, vocals, rhythm, and learn to sing as part of a group. “The conductor motions to you,” he said. “You have to make it sound like you are singing all together with one voice so that it sounds like one person singing. “When that happens, you feel it,” he said.

He says singing shouldn’t be viewed as a competition. “It’s not about ‘us and them,’” he said. “We’re all Navajos, we have the same ceremony and there is a patient there. There is healing there.” Denny says it’s important for everyone who is attending a ceremony to stay focused on being reverent and disciplined while participating.

“One of the old traditional etiquette of going to a ceremony is as soon as you get out of the car and step on that ceremonial ground, you are at the ceremony and there is a patient that is the one that requires the healing,” he said.

“The sponsors want to have a good ceremony with the focus on the patient’s healing, well-being and recovery. They don’t want any mistakes.” Denny says it’s important to do a self-assessment before even stepping on the grounds. “Your whole being has to consider that you are a part of this – a helper, not a bystander,” he said. He also says judgment, criticism and egos don’t belong at the ceremony.

The only exception, he says, is if the hataalli gives you permission to step in and lead a song. Denny said it’s important to remember that it’s a public health event that is happening and everyone in attendance is part of the ceremony. “Everybody has that healing bestowed upon them,” he said. “When they leave they feel good about the whole thing.”