Hogan film is really all about home 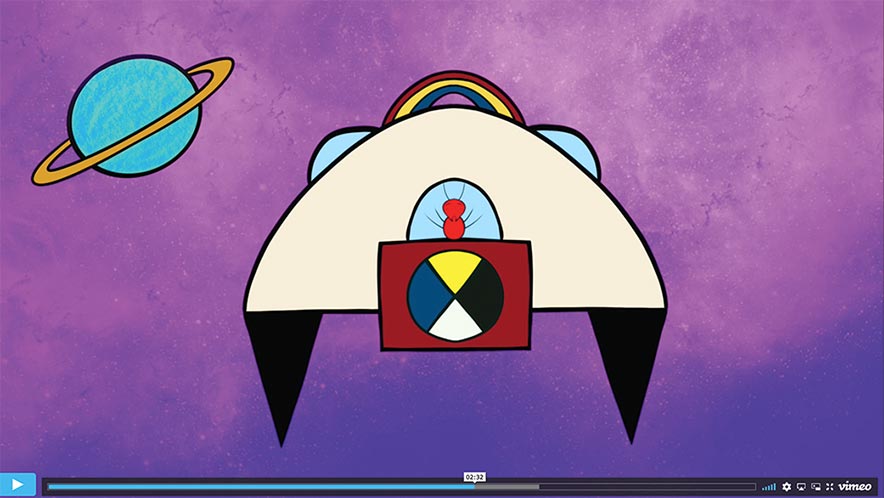 Courtesy photo | Melissa Henry
To show hogans are not just the dwellings of the past, Henry imagined one being launched into space. Red Ant, who inspired the shape of the first hogan according to traditional stories, is the pilot.

When the Museum of Indian Arts and Culture in Santa Fe asked Diné filmmaker Melissa Henry for a brief movie about hogans for its permanent collection, Henry knew right away the film they DIDN’T want to make.

“I didn’t want it to be ‘A long, long time ago …’” said Henry, feigning a ponderous narrator voice. “I wanted it to be fresh. We’ve survived as a people by moving forward, not being stuck in the past.” So they (Henry’s preferred pronoun) found the freshest eyes they could: those of their kindergarten and first-grade art students in the Santa Fe schools.

They talked to them about hogans, and what Henry’s hogan might be like if they built one (you’ll see it in the film, and it’s wonderful). “I was just sitting there, and the sentence came to me, ‘This is a hogan,” recalled Henry, 42, who is Tó Dich’íinii born for Kin Yaa’áanii. They didn’t want to retell the hogan origin story — “People can find that if they want to” — but Navajo eyes will pick out all the animals that figure in it, including red ant, namesake of Henry’s and their husband’s production company.

“Eventually, I send a hogan into outer space, and you’ll see Red Ant,” they noted. “He’s at the beginning and the end of the story.”

Basically, what Henry came to was that a hogan is anywhere a Navajo calls home. “I went to visit my brother in New York City once, and we hung the things you would find in a hogan in his apartment,” Henry recalled. “That was his hogan.” You’ll see that hogan in the film too.

They’ve had the project done for a while, but hesitated to publicize it on the reservation because it’s so cheerful and fanciful. “I know people on the rez aren’t having the greatest time right now,” they said. “I didn’t know if I should bring them something joyful and playful. It might make it look like I’m not aware of the suffering.”

In the end, however, they couldn’t resist sharing the project with other Navajos, and posted “This is a Hogan” on their website for anyone to see. It turned out it was just what people needed to lift their spirits. Like the Navajo people, the hogans in Henry’s little film are resilient, adapting to floods, fires and even a volcanic eruption.

“I’ve gotten mostly positive reactions,” they said. It lifted Henry’s spirits too. “I’m excited about it,” they said. “I haven’t made a project in a long time.” Since they’re a teacher in their day job, they also created a lesson plan that goes with the film. While it’s focused on art, it could also be adapted for geography, science or about any subject.

Information: Both the film and lesson plan are available for free at www.melissahenry.com (and while you’re there, check out the cool cat T-shirts). The film will be installed at the Museum of Indian Arts and Culture in Santa Fe when it reopens to visitors.