With the ongoing pandemic canceling this winter’s basketball tournament, the organizers of the Striking Eagle Native American Invitational are taking this time to reevaluate its practices in hopes of improving the annual event.

The 10th edition of the SENAI Basketball Invitational and Education Fair was supposed to have taken place last week in the newly remodeled UNM Johnson Center, but due to coronavirus restrictions in New Mexico the event was scratched. 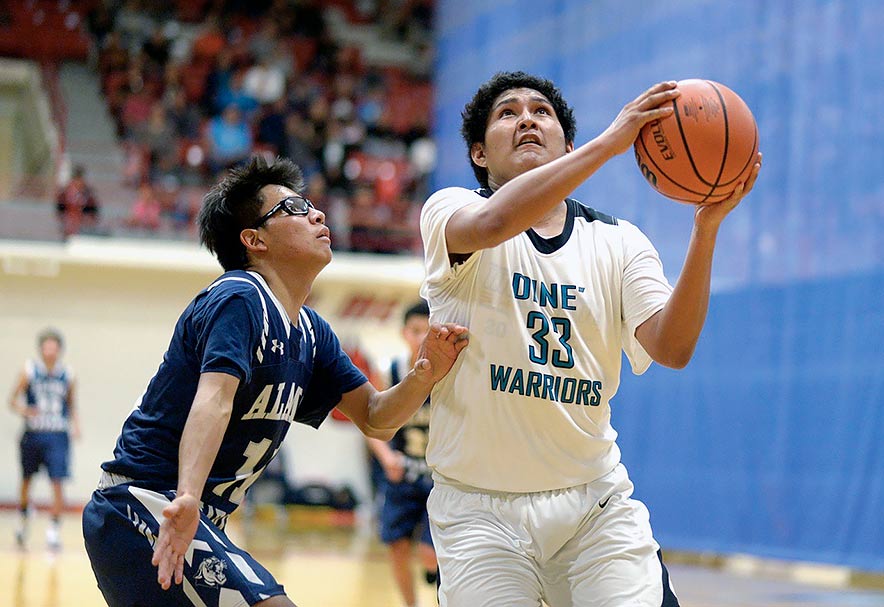 “It’s very heartbreaking,” SENAI organizer Dr. Shawn Secatero said. “A lot of our students have contacted me, especially those who are seniors. They were really looking forward to playing in our tournament.”

Secatero said he’s also received a deluge of phone calls from fans wanting to know about the status of the event.

“I just told them that we had to let it go and we had to focus on our healing,” he said.

With the event hitting the pause button until next winter, Secatero said they are looking for people to join their group as the annual event attracts Native American basketball teams from Arizona, New Mexico and Utah.

“It’s a true blessing to have these teams come out,” he said. “A lot of these kids play their hearts out for this tournament. For most kids this is their state tournament.”

Besides playing basketball, the SENAI organizer said the student-athletes they serve also like the workshops that are being presented.

“On a 5.0 scale our workshop rating has been between 4.5 and 5.0,” Secatero said of the 107 workshops they’ve hosted in the previous nine years. “It’s a great experience for them. I’m hoping to train the students that we have so that they can have productive lives.”

Since the event’s inception in 2011, Secatero said the workshops have varied and they include topics such as college prep, suicide prevention and Native culture. Most recently they had two semi-professional teams take part in the event with the New Mexico Gladiators football team and the New Mexico Bullsnake basketball team conducting workshops on self-esteem, and drug and alcohol prevention.

In the 10 years that they have hosted the event, Secatero estimates they have served about 5,000 student-athletes and they have attracted over 30,000 fans.

“We’re really proud that our event has really grown,” he said while noting that the SENAI tournament was held at the Santa Ana Star Center and Bernalillo High School for the first three years before it was moved to UNM.

“Not only did we include schools from New Mexico but we also had schools from Arizona and Utah compete,” Secatero said.

The tournament, Secatero said, has drawn teams as far as Page and San Carlos, Arizona.

“We really enjoy having them participate in our tournament,” he said.

Since it began in 2011, Secatero said the SENAI tournament has grown from 28 teams to as large as 64 teams in 2017 with spectatorship reaching 5,000 fans.

Last year, the tournament only hosted 47 teams due to the $35 million renovation project at Johnson Center.

“It kind of shrunk a little bit compared to the other years,” Secatero said. “We were really looing forward to having our event this year but this COVID-19 pandemic put a damper on what we had planned.”

Nevertheless, he said the cancelation allows the planning committee to take a break and look at ways in improving the event.

“We do this out of our free time,” Secatero said of the committee, which is made up of a dozen active members and 50 correspondents.

“This break will allow us to reevaluate everything so we can make it better for our 10th anniversary next (winter).”

Secatero said the committee members are the reason why they run a successful event, as a few members are former SENAI basketball players.

“Some of them joined the SENAI team as a way to give back,” he said.

During last year’s tournament, the SENAI family awarded seven scholarships in an essay-writing contest based on the tournament’s theme: “Honoring our spiritual, mental, physical and social well-being.”

Asked about the SENAI’s creation, Secatero said the tournament was started by group of To’Hajiilee elders who wanted to host a Native American basketball tournament and it was fashioned from the same concept as the Lakota Nation Invitational in Rapid City, South Dakota.

“Before my dad (Leon Secatero) passed away he asked ‘Why don’t you bring all these teams to UNM to have them compete and have them learn something at the same time?’” Secatero said.

As for the Lakota Nations Invite, the SENAI organizer said the tournament up north was established in 1974 on the Pine Ridge reservation with a handful of Native American teams competing. And once they outgrew, the tournament was moved to Rapid City.

“It’s a really big event,” he said. “In their invite they have a lot of events including a powwow, archery, wrestling and hand games. They even have a college and career fair for their students.”

Secatero said a group of SENAI committee members made the trek to Rapid City two years ago with the intent of sharing ideas.

“We presented them our own SENAI tournament with them and we shared our best practices with them,” he said.

As for the upcoming event, which is tentatively scheduled for Dec. 28-30, 2021, Secatero is hoping to get 72 teams to participate with possibly 10 brackets. Part of their plan is to have an elementary and middle school tournament to coincide with the high school tournament.

“We’re already having committee meetings,” he said. “We’re looking forward to the 10th anniversary. If people would like to help or contribute they can contact me.”