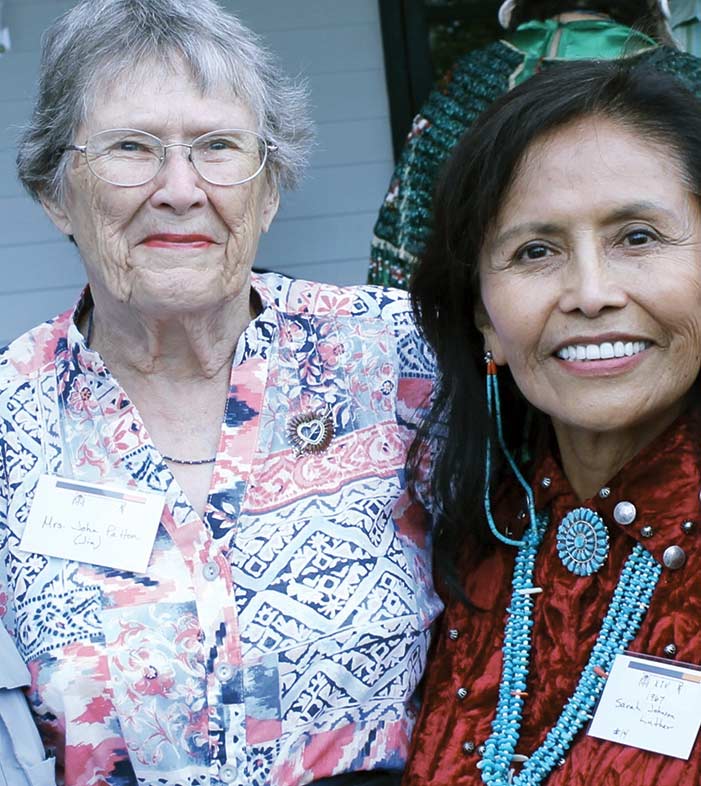 Sarah Johnson, Miss Indian America 1967, and her host Virginia Patton during a visit back to Sheridan, Wy.

Sheridan, Wyoming, in the 1950s was said to be the most racist city in the U.S. Signs hung in store windows and in other western towns reading, “No Indians allowed.”

That history began to change when tribal leaders like Joseph Medicine Crow and Donald Deernose from the Crow Nation joined Sheridan town leaders to put an end to the prejudice and discrimination.

In 1953, together they hosted, with the help of many volunteers, the first All-American Indian Days and Miss Indian America Pageant. The annual celebration of Native American culture continued in Sheridan until 1984, then moved to Bismarck, North Dakota, for the next five years. 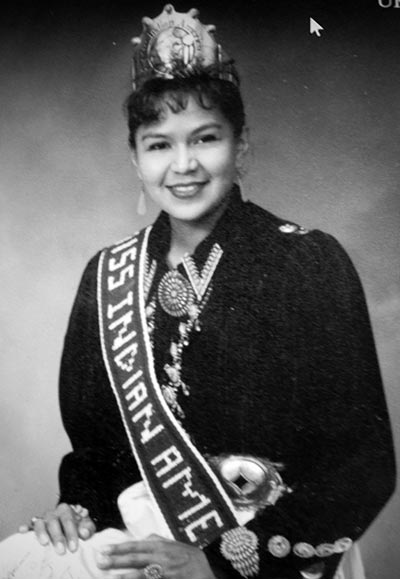 To show their appreciation and document the historic event, a committee of Miss Indian America titleholders launched the All-American Indian Days Honoring Project.

“What we are doing is honoring the townspeople, host families, churches, businesses and their (tribal neighbors), the Crows, Northern Cheyenne, Eastern Shoshone and Arapaho,” explained Arviso.

During the three-day celebration, thousands of tribal members from across the country arrived and pitched tents at the Sheridan fairgrounds.

Father Peter Powell from Chicago’s St. Augustine Center for American Indians, one of the pageant judges now in his 90s, remembered those days clearly.

“I was awestruck the first time I saw (the campground),” he said. “It was alive with beautiful teepees from all over the Native nations.”

Describing the festivities, he said there were athletic competitions, horse races, arrow shooting contests and 49 dancing and drumming “till early hours.”

“It was an experience of lifetime, I’ve never had anywhere else,” he said.

The highlight of the gathering was the Miss Indian America pageant. According to Judy Slack, the city’s liaison to the MIA committee, there were 30 pageants in Sheridan over the years. Another five Miss Indian Americas were crowned after the pageant moved to Bismarck, hosted by United Tribes Technical College. 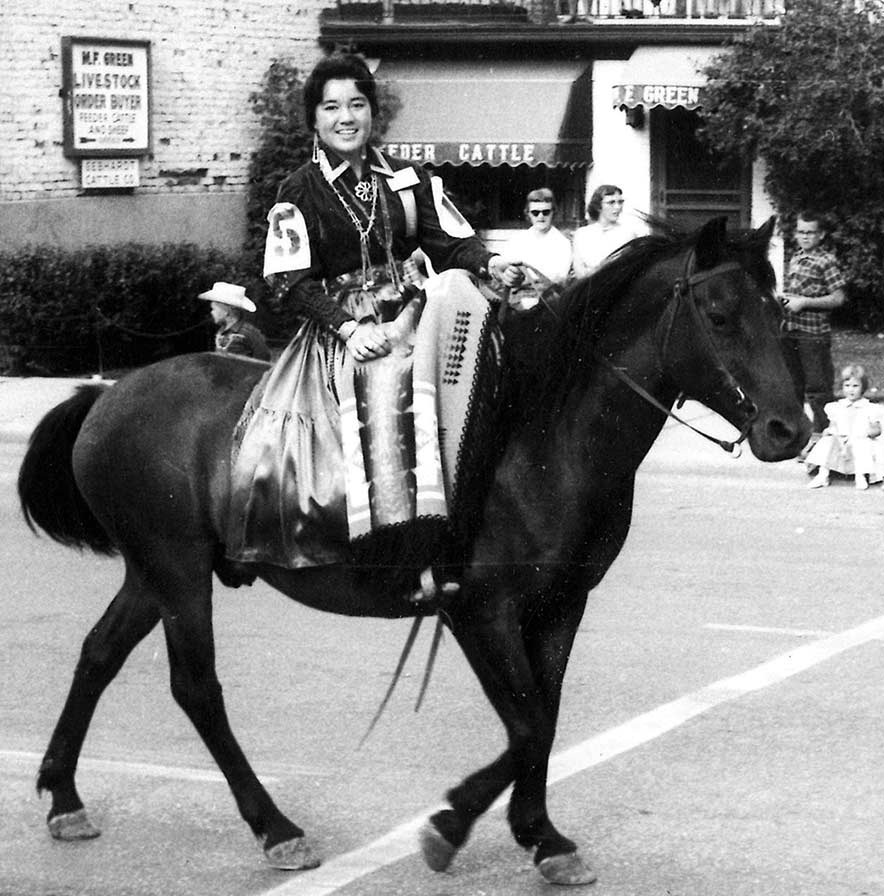 As Miss Indian America, their year-long task was to break down stereotypes and educate non-Natives on Native culture and history. They visited schools, traveled internationally, appeared on national television.

Recalling her reign, Wonda Johnson said, “It was one of the most honorable and memorable times in my life.”

Among her appearances, Johnson was invited to the Rose Bowl parade in Pasadena, California, and traveled to Europe sharing her knowledge of Dine’ cultural heritage.

She said the experiences led her to serve the people of New Mexico. She is a four-term state representative (D-Shiprock) covering McKinley and San Juan counties.

“I had so many good experiences,” said Arviso who went on to be a curriculum writer focusing on Native American history and culture.

“It was a unique experience,” Johnson said. “I am very grateful to the early founders, these visionaries of the idea of bringing two cultures together for a better understanding of each other.”

“I became a better person in the way of service,” she said. “When I see a need, I want to be there to help.”

Father Powell, who was a pageant judge for around 20 years, witnessed the unfolding of cross-cultural appreciation and understanding.

“After a few years of the pageants and people seeing the beauty and wisdom of these women, they (non-Natives) were transformed with a new respect for Native people, a respect that has continued to this day,” he pointed out.

Gradually, the derogatory signs in the windows came down, wrote author Gregory Nickerson for “Montana, The Magazine of Western History.”

Arviso said it was all made possible through the hard work and dedication of tribal and townspeople who answered their leaders call for volunteers. She recalled how whole families turned out to support the annual Indian Days and pageant. 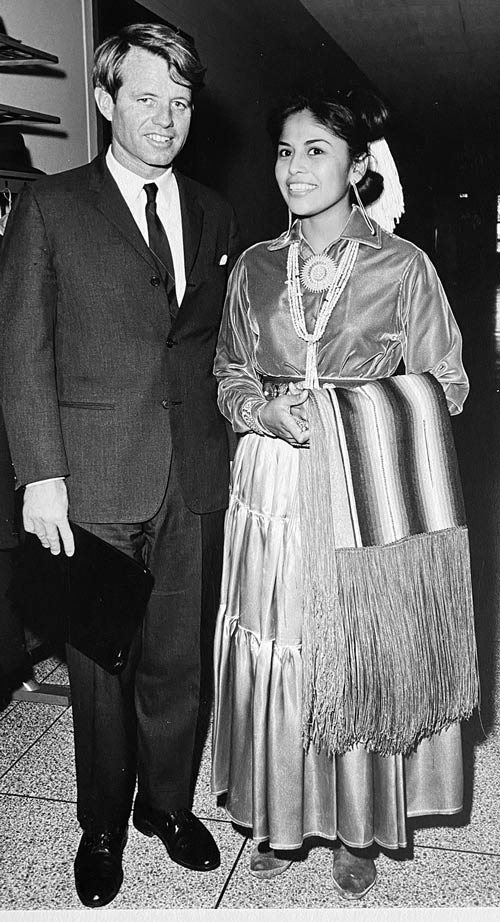 “It was amazing! This was done by ordinary people,” she said.

Added Sarah Johnson, “Being there, we saw how much work the townspeople and the Native Americans from neighboring tribes went through to put on this annual event. It was all volunteer work, no one was paid.”

Slack pointed out the event was not just three days, “it was all year.”

Every year, a host family in Sheridan, then Bismarck, opened up their home to Miss Indian America for their yearlong reign, while other townspeople and tribal members volunteered as chaperones on their travels.

“I was blessed with the family I stayed with, John and Virginia Patton,” said Sarah Johnson. “They greeted me with open arms and treated me as their daughter.”
Wonda Johnson’s host family was Mike and Diane Zainhofsky.

After the pageant ended in Sheridan in 1984, Sarah Johnson said on visits back she didn’t see evidence anywhere the historic event ever took place.

Sharing her concern with Arviso, she recalled saying, “Let’s do something about this. Let’s have something to remember the dedication and energy.”

With Wonda Johnson joining their effort, they approached the city of Sheridan with a plan. The city approved the All-American Indian Days Honoring Project on Aug. 3, 2020.

A sculpture designed by a Native American artist will be constructed in Sheridan’s historic Rotary Park. In a circular space around the sculpture there will be benches for people to sit on to reflect on what happened decades ago.

The Honoring Project committee set out this past year to raise funds to cover the costs. The next step is a national art competition for Native American artists. Out of an application pool, five artists will be invited to submit a design and one will be chosen.

The unveiling, blessing and dedication is tentatively July 14, 2022, during the Sheridan, Wyoming, rodeo.

“Thank you from the bottom of my heart!” she said.

About the Honoring Project, former Sheridan mayor Miller said, “This is a wonderful tribute from Miss Indian Americas who have done so much for race relations and peace.” 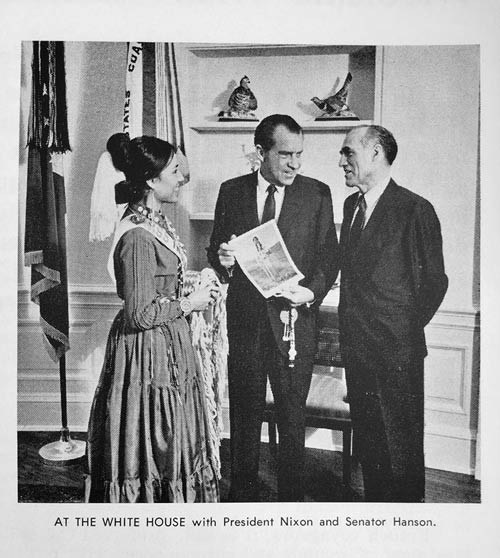