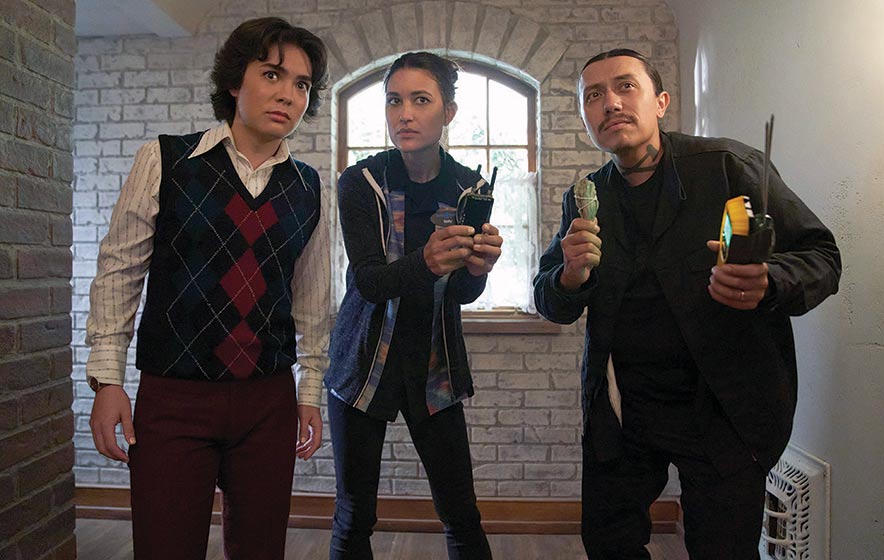 The first season of “Rutherford Falls,” a Peacock TV original, aired on the streaming service in 2021 and received tons of positive reception from viewers.

Sierra Teller-Ornelas, Diné and showrunner or “Rutherford Falls,” spoke to the Times and said the show came out in the throes of COVID-19 and she was not sure how it would do.

“To have our show come out in all of that, we were just like, ‘What’s going to happen?’” she said. “And it was just like this immediate love from Indian Country of like, ‘Holy s—, holy moly, I’ve never seen something like this. They actually made it funny for Indians.’

“Usually, you only see comedies with Native people in them and we’re the joke, we’re the butt of the joke and I think people were really excited to see a show where we were centered,” she said, “and we were in on the joke, and we were making the jokes.”

Now the sitcom is back for a second season after being renewed three months after season one premiered.

They tackle major changes to the town and the reservation it borders, which are initiated by tribal casino CEO Terry Thomas (Michael Greyeyes, Plains Cree from the Muskeg Lake First Nation).
A key component in “Rutherford Falls” is displaying Native joy and humor for a larger audience and using them to try to bring three dimensionality and to humanize Native people in the eyes of non-Native people.

Native media tends to be heavily trauma centered especially in media that is made through the non-Native lens while Native joy tends to be put on the backburner.

Teller-Ornelas believes this is due to a lack of education when it comes to Native people.

“I think with non-Native audiences, there’s so little education or depictions of us that there’s a weird thing where they’re ready to feast on our trauma, they’re really ready to associate us with trauma,” she said.

“Studies have shown that that really affects legislation, education, grants, the heath industry and it affects how we are treated in a lot of different ways,” she said, “and so comedy, at its core, humanizes people.”

Teller-Ornelas said humor is important to her and the writers’ room of “Rutherford Falls,” which is largely comprised of Native writers.

Training audiences to not want only stories about Native trauma is an important belief held by Teller-Ornelas because there have been times in her life where jokes were still made even if she was going through difficulties.

Jana Schmieding, who is also a writer on the sitcom, spoke to the Times and holds the same beliefs as Teller-Ornelas.

She said the show is very comedy forward and the writers and everyone involved in the show is focused on laughter.

“We’re telling jokes that are alluding to the trauma that we all carry but we are not centering our trauma as a story point,” she said.

“We’re highlighting the day-to-day experiences of being Native people living on our traditional homelands that butts up next to a sort of a, largely white small town, we’re depicting the array of very diverse Native people that live on the rez, live in the town, lived in the city and we’re trying to just humanize Native people and do that through humor,” she said.

Schmieding believes the world has seen Native people depicted as a traumatized, impassioned and angry group of people and she said that depiction is largely through non-Native lens.

‘Power of the page’

“When we have the storytelling sovereignty, when we have the power of the page as writers, we want to tell stories about us and our lives and struggling and experiencing success and having joy, it’s really important to our show that we center that,” she said.

Teller-Ornelas held the same sentiment in wanting to show a variety of Natives because she did not get to see that growing up.

“I come from a very long line of successful artists, and I never ever got to see them on television as, you know, successful Natives, Natives with education and a variety,” she said.

“You know there’s usually only like just one and it was really important for us to show lots of different kinds of Native people,” she said.

In the past few years, shows made by and for Natives have become more common than they used to be with shows like “Rutherford Falls” and “Reservation Dogs,” a Hulu original. With these shows comes a variety of representation for Native people that was not previously available.

“I hope that we (Native people) become humanized,” she said. “I hope we are afforded the ability to be seen as whole people with entire communities and relationships and who have love in our lives and who have mess in our lives, we’re also allowed to be messy people which we are, and we are seen as successful business people.”

She believes that the general population wants to know more about Native people and the Native experience, however, with systemic erasure Natives have not been given an opportunity to “step into the role as storyteller.”

“Now we have these two shows and there will be more where we are able to give the audience that perspective and that point of view that they’ve been seeking, I hope,” she said. “And hopefully they want to continue to consume more Indigenous media.”

‘Generations of people behind me’

Both Schmieding and Teller-Ornelas has pulled inspiration from their own lives to use in “Rutherford Falls.”

To play the character of Reagan Wells, Schmieding is inspired by her family, specifically the women in her family.

“I have an auntie who is like my second mom. I’m like very much my grandmother’s, my aunties, and my mom’s child,” she said.

Teller-Ornelas also uses her real-life experiences as showrunner and she said the Native stories in the show are just a reflection of the Native writers.

She pulls most of her inspiration from being in a museum a lot growing up due to her mom’s occupation as a weaver. During those times, she met many people and used inspiration from those people to create some of the characters.

“Tai Leclaire who is one of our writers, who’s Mohawk and Mi’kmaq, he was like, ‘I want to do a Halloween episode because Halloween is huge where I live,’” she said.

She laughed as she recalled her nephew being four years old and dressing up as Jason from “Friday the 13th” for Halloween.

“There’s some Natives who don’t like Halloween because of the cultural appropriation and there’s some of us who just, like, love it and we’re, like, ‘Oh, we have to do a Native Halloween episode,’” she said.

“So it’s also just like the joy of getting to, like, tell these stories you have never seen before but that we have seen in our lives,” she said.

Both Teller-Ornelas and Schmieding encourage people to tune into the new season of “Rutherford Falls” on Peacock TV. A subscription is needed in order to watch the show when it premieres on June 16.

“The algorithm is a weird thing and it’s hard because I think as Indigenous people, we don’t have an algorithm yet, we don’t have enough data points yet, the way other communities do and so it’s really important for people to watch the show, to get Peacock accounts, to watch something after you’re done binging,” Teller-Ornelas said.

“There’s all these, like, weird little things that the computer measures in order for it to be a success and so it’s like just hoping that (you) will watch that show and just enjoy it because it’s a really fun ride this year,” she said.