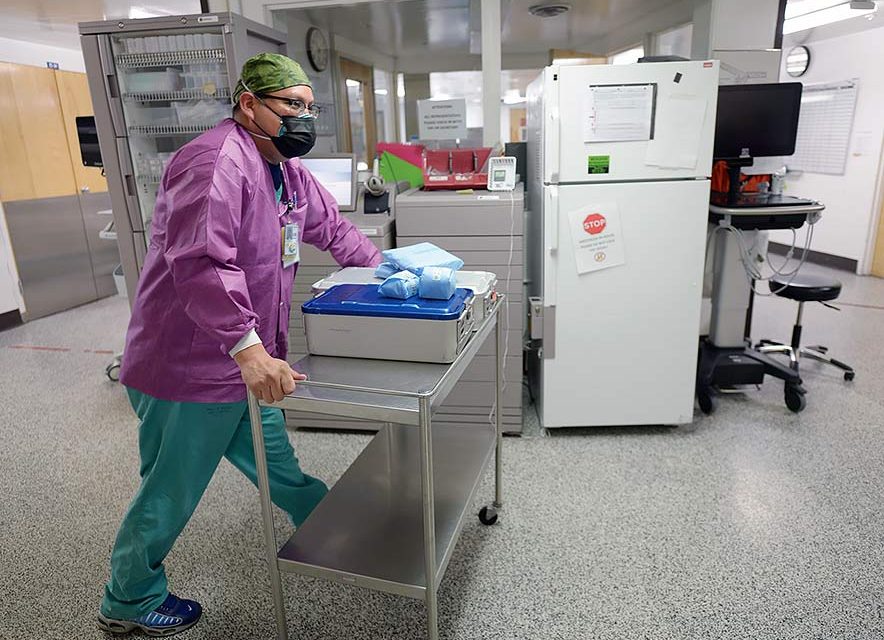 Navajo Times | Donovan Quintero
Operating Scrub Technician Jonathan Francisco continues to hold the front line against the COVID-19 pandemic even after losing his mother and brother.

He remembers feeling scared. When he learned COVID-19 had reached the U.S. and the Navajo Nation, Gallup Indian Medical Center Surgical Scrub Technician Jonathan Francisco, originally from Chinle, was about to work with a patient who had contracted a virus the world had never dealt with. Since the pandemic arrived, Francisco, 31, said he was detailed to the Intensive Care Unit and the newly established COVID-19 Unit, which has 18 COVID-19 beds and six ICU beds.

It was April of last year when Francisco stood outside GIMC’s ICU door, clad in full protective clothing, breathing heavily. He took several deep breaths to calm himself before entering the room. “I had to take a deep breath and reassure myself and tell myself, ‘I can do this. I am here to help and to stabilize a patient,’” he said. He entered the room to translate and advocate for the Navajo grandfather.

After all, what has always motivated him is being there and caring for his patients. A person stricken with COVID-19 would get the same care and advocacy he’s always given. “I want them to know they are not alone and that we are here to take care of them and be with them,” Francisco said.

Francisco grew up in Valley Store, which was named after a trading post north of Chinle. He is the youngest of five brothers. In high school, he was elected class president. He jokingly said he won on the promise he’d ensure all the candy machines were stocked if he won. In 2006, he graduated in the top 10 of his class.

That fall, he found himself on the Northern Arizona University campus as a freshman, majoring in nursing.

In 2011, he graduated. His greatest supporter and biggest cheerleader, his mom, Catherine Francisco, stood next to his father, John Francisco, and cheered him on when he walked across the stage. “I said to her, ‘You can retire now and just enjoy yourself,’” Francisco remembered telling his mom, who was a medical support assistant at the Chinle Service Unit at the time.

He began his career at the Chinle Service Unit in 2012 as a health technician, then at Tsaile Health Center before moving on to the Phoenix Indian Medical Center where he worked until 2016. He took a job as a surgical scrub technician at GIMC, where he’s been ever since. In January of 2020, he remembers hearing news of a contagious virus that was getting people sick. Thinking the virus would be stopped through preventative public health measures, he did not give it much more thought.

Then, when it reached what he called “secondary prevention,” which meant the preventative measures were not working, the hospital began to prepare. “It’s not going to come here,” Francisco remembers thinking. On March 11, 2020, the New Mexico Department of Health announced three New Mexicans had contracted the virus. Six days later, on March 17, the Navajo Nation Department of Health reported the first COVID-19 case on the reservation in Chilchinbeto, Arizona.

GIMC had already begun screening everyone who requested entry into the hospital before the first cases were reported in New Mexico. The hospital began detailing out extra duties to all doctors and nurses, he said. In addition to his duties in the operating room, he was assigned to the ICU/COVID-19 Unit. “We were prepared here,” Francisco said. “Our management here were actually prepared for us. They told us what to expect. I was detailed to the ICU and to the COVID unit for 120 days.”

Then in April, more than 170 people were exposed to the virus at the Gallup Detox Center. As McKinley County Health officials put the word out on what kind of symptoms to expect, Francisco was about to work on his first COVID-19 patient, the 70-year-old grandfather. He remembers telling himself, “Holy crap this virus is awful and ugly.”

As he entered the COVID Unit filled with patients, “Everyone was getting intubated,” he said. “It really got me.” Day by day, the fear began to dissipate and his years of training and experience took over. His patient was already on a ventilator. For a week, he tended to his patient, who quietly lay on his bed. Only the ventilator seemed to speak for the man. The elder would never wake up.

“I came back the next day and I was told he had expired,” he said. “Losing a patient is probably one of the worst things to experience.” Three months later, in June, Francisco would experience the most terrible pain he’s ever felt, the loss of his mother, who was 66.

Then three months after losing his mom, in September, he and his family were dealt another devastating blow when his brother Derrick Francisco, 41, a Navajo medicine man, lost his battle with COVID-19. “I lost my mom back in June and my brother in September, to COVID,” he said.

Before his mother’s passing, Francisco said he took the day off from work to attend the Chinle High School drive-through graduation with his family. He noticed they were not looking right. He took them to the hospital to get tested for COVID.

He returned to work. His mother, who was best known as Cathy in Chinle, called crying. She told him they had to quarantine at one of the hotels in Chinle. She was diagnosed with COVID on May 23. Two days later, on May 25, she was admitted to the Chinle Comprehensive Health Care Facility, from which she had retired after 40 years as the clinic’s medical support assistant.

On May 30, she was intubated and flown to St. Joseph’s Hospital in Phoenix. She lost her life in the early morning hours of June 4. “Never in my life did I think my mom would be put on a life support and intubated,” he said. “My mom was a health care worker herself in Chinle. She was supposed to be enjoying her retirement. She didn’t deserve this.”

The loss of his mother put Francisco in a place where he wanted to be alone. He fell into depression. The holidays were not too far off. It hit him when he realized his mom would not be spending her favorite holiday, Christmas, with her family.

Then in September, while he was in a surgery, he started getting calls from his family as they frantically tried to get ahold of him. He had left his phone in the locker.

After surgery, he got his phone and saw all the missed calls and text messages, telling him to call as soon as possible because he had lost his brother. To make matters worse, his brother’s birthday was in December, said Francisco.

“My nieces are going through so much,” he said, adding they lost their mother in 2016, and now their father to COVID-19 in 2020. Being the pinnacle of his family, he knew he had to dig his way out of depression. “I forced myself to get up because I don’t want to disappoint anyone,” Francisco said. “I have to keep my mind busy. Sometimes, I don’t want to do anything, sometimes I feel lonely or depressed and I don’t know what else to do.

“I have to keep myself going,” he said. “It’s exhausting sometimes. Some days it’s OK, and some days it’s the worst day ever.”

To continue the healing process, he enrolled at the University of New Mexico to begin working on his master’s in health care management. He calls his father and nieces and talks to them. He’s also started talking to his coworkers about his depression too.

“I was so close to my mom. I just pray, asking her to protect me, protect my dad, my siblings, my nieces,” he said. On Jan. 10, he convinced his father to get the first dose of the Pfizer vaccine. “I was happy for him. He waited for two-and-a-half hours to get his dosage,” Francisco said.

He tries not to watch too much news because the reports of the latest death toll remind him of his mom and brother. Rather than focus on the loss, Francisco wants to remember his mom as the caring person who told him to never push away anyone needing help.

“She was a caring person,” he said. “She always told me to help people: ‘Help them as much as you can and don’t push anyone aside. Always greet people.’ “She was like that,” he said. “She had always told me every morning, ‘Be careful, don’t rush putting your PPE on and take precautions around yourself, wash your hands, sanitize.’”

Francisco plans to eventually become a general surgeon. His mom and brother will be looking over him, watching him accomplish his dreams, which is only what Cathy wanted for her children.