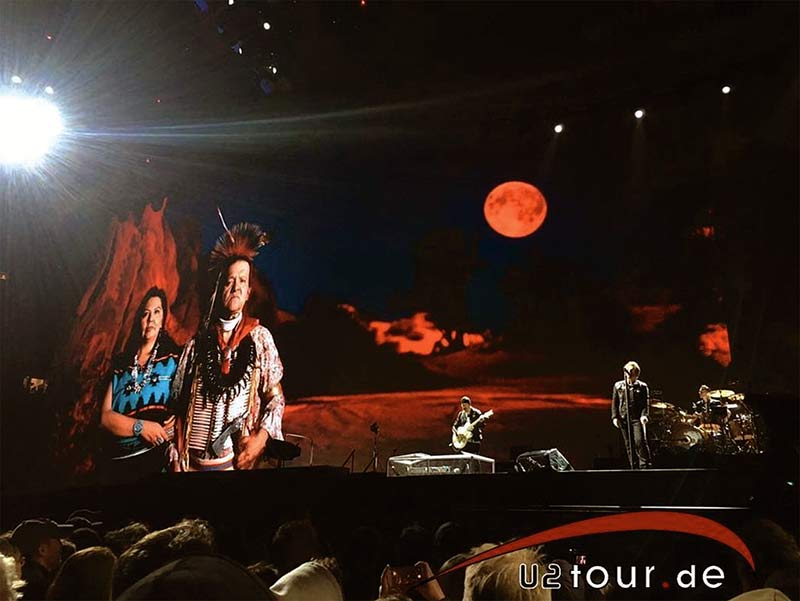 Submitted Pamela Peters, Diné, and her friend Monty Bass represent Native Americans in a slide show of the world's people projected behind the band U2 in their current concert tour.

Diné filmmaker appears on large screen in U2 show

Submitted
Pamela Peters, Diné, and her friend Monty Bass represent Native Americans in a slide show of the world’s people projected behind the band U2 in their current concert tour.

Pamela J. Peters, originally from Shiprock and now residing in Los Angeles, proudly represents the Diné in a large screenshot on the stage behind the Irish rock group U2.

U2 is touring in celebration of the 30th anniversary of their album “The Joshua Tree” and during the performance of “One Tree Hill” a music video is played behind the band showing people from around the world.

Peters was cast for the video and portrayed Native Americans, wearing her traditional Diné attire, along with her friend, actor Monty Bass of Oklahoma.

One day in early March, Peters saw an ad for a casting call while walking around town. The ad called for people of all ethnicities and since she’s involved with helping young Native Americans get into acting, she decided to put the information on Facebook. A few days later Peters was asked to meet the director, Anton Corbijn. He asked her to come to the casting call where Peters took a few headshots for the video.